By Amy Lamare on October 1, 2014 in Articles › Entertainment

On September 19, Jack Ma officially took over the crown of the wealthiest person in China thanks to the explosive $25 billion IPO of the company he founded, Alibaba. Jack isn't the first tech entrepreneur to rocket to the heights of China's rich list. In fact, Alibaba's ascendancy is just the latest step forward in a very distinct trend in China. Not that long ago, any list of China's wealthiest citizens would have been dominated almost exclusively by real estate investors. Today, a new generation of internet moguls are making their millions and billions in China and dominating wealth ranks. Half of the top 10 richest people in China this year are technology executives. All of the top 10 are men, but it should be noted that the 11th richest person in China is a woman named Chan Laiwa. Chan is only $100 million away from taking over the tenth spot.

Aside from Alibaba, other internet and technology entrepreneurs making the list come from Tencent Holdings, Ltd, a Chinese Internet conglomerate, search engine provider Baidu, smartphone maker Xiaomi, and the e-commerce company JD.com. This paradigm shift is significant for a number of reasons, not the least of which is that even though the Chinese real estate market is booming, only two major property investors made the top 10. The transition speaks to how quickly the Internet sector is growing in China and how investors who may have once looked to real estate, are now looking to technology for future growth over the next decade. China has had a record 15 Internet IPOs this year so far, raising a total of $29.2 billion. In 2013, there were just four Chinese Internet IPOs over the same period that raised a scant $91 million. Clearly technology is the place to be right now. So without further adieu, let's take a look at the 10 richest people in China today and find out how they earned their massive fortunes…

Liu Yongxing started out repairing electronics, but soon found he preferred to work with his brothers (Liu Yongyan, Chen Yuxin and Liu Yonghao) selling quail and feed in the rural Sichuan Province in the 1980s. They started the Hope Group, and under the economic reforms made available in the 1980s, were able to turn Hope Group into Hope Oriental Corporation, one of China's most successful private-sector businesses. The brothers went their separate ways in the mid-1990s and Liu Yongxing's Shanghai based East Hope Group has become one of the largest privately held industrial materials manufacturers.

He Xiangjuan is the co-founder of Midea Group, one of China's biggest appliance manufacturers. Xiangjuan owns Midea, which, of late, has been struggling. The company had a greater than 30% plunge in revenue in the first half of the year. Sales of traditionally strong products for the company such as refrigerators have dropped by 65% from last year's sales. The company's washing machine business is down 50%. Midea has a joint venture in India with Carrier, a unit of United Technologies.

Richard Liu has made his billions as a wise investor. He co-founded Morningside China TMT fund in 2008 and was an investor in the Chinese smartphone maker Xiaomi, which is worth $10 billion. He also worked with the social networking service YY and with e-commerce giant JD.com. He is an investor in the Chinese version of Uber called Yonche. Unfortunately, we could not find a photo of Richard Liu.

Liu Qiangdong is one of the Internet entrepreneurs on this list. In June 1998, Qiangdong started his own business in Beijing that he called Jingdong. He was a distributor of magneto-optical products. By 2003, he had opened 12 stores. The SARS outbreak in 2003 led to staff and clients of Jingdong staying home to avoid infection and forced Liu to rethink his business model. Liu launched his first online retail website in 2004, and founded JD.com later that year in 2005, Liu closed all of his brick-and-mortar stores and become an e-commerce business. The company has become one of the leading e-commerce businesses in China.

Robin Li graduated from Peking University with a degree in Information Management and then earned his Master's degree in Computer Science from SUNY-Buffalo. His first job post graduate school was with IDD Information Services. While with IDD, he developed and improved various algorithms designed to improve search engines. In the mid 1990s, Li patented an algorithm for site-scoring called, Rankdex. In 2000, he launched his own search engine, Baidu, using his algorithm. Baidu is now the largest search engine used in China, and the third largest independent search engine in the world. Baidu is the first Chinese company to be part of the NASDAQ-100, and Mr. Li has been featured in multiple publications.

Ma Huateng is a Chinese Internet entrepreneur. Nicknamed "Pony", Ma is the founder, president, chief executive officer, and executive board member of Tencent Holdings, Ltd., one of the biggest telecommunications companies in China. Pony earned his B.S. in software engineering in 1993, and, in 1998, Tencent with four friends. . One year later, the company launched Tencent QQ, an instant messaging service which became very popular in China and put Pony on the road to his great wealth. Tencent soon became the largest instant communication service network in China. Along with its expansion, Tencent added more employees and eventually Ma was named chief executive officer, executive board member, and chairman of the board. Tencent grew in popularity with the introduction of such popular online multi-player games as, "League of Legends". Billed as "the Chinese AOL", Tencent now encompasses web portals, e-commerce, and multiple social networks as well.

Li Hejun made his debut on the billionaire's list in 2014. He is the chairman of Hanergy Holding Group, one of the world's largest manufacturers of thin solar panels and equipment. Over the past year and a half, with an increased demand for solar energy worldwide, Hejun's company has seen dramatic growth. The company acquired California-based competitor MiaSole. Hanergy, under Hejun, has made the emerging technology of solar equipment a multi-billion business. Li Hejun also owns one of the world's largest hydro-power plants.

Zong Qinghou got his start selling milk to a mini-grocery story in the late 1980s. That small operation grew to include selling soda, ice, and office supplies. Eventually it became the Hangzhou Wahaha Group, which is China's largest and most successful beverage supplier. He was China's richest man in 2010, and was widely viewed as a figure of Chinese success over European influences. However, of late, his reputation has been tarnished by the revelation that he had a European Green Card, and allegations of tax evasion.

Wang Jianlin is a billionaire entrepreneur thanks to the success of his Dalian Wanda Group Corporation Limited. What started as a residential real estate company in 1988 has become one of China's largest conglomerates with interests in real estate, tourism, hotels, and entertainment. Jianlin has been the Chairman of the Dalian Wanda Group since 1989. Under his leadership the company has evolved enormously. Today the company has 71 Wanda shopping centers and 40 five-star hotels in China. In 2012, the company purchased US based cinema company AMC Theatres for $2.6 billion.

Just 20 years ago, Jack Ma was a modest English teacher who never could have even dreamed of the riches that would befall him in the following decades. In 1995, Ma visited the United States for the first time. He had recently started a side business, a translation company, to help capitalize on a recent Chinese export boom. It was during this visit to the U.S. that a friend showed Ma the Internet for the first time. This friend told Ma that anything he wanted could be found on the world wide web in an instant with the click of a button. So Jack searched for beer. In 1999, Jack brought 18 friends and family members together in his apartment and spent two hours pitching them his vision. Every single person bought in, giving Ma $60,000 to start Alibaba. On September 19th, Alibaba.com officially became the largest Initial Public Offering of all time. That $230 billion makes Alibaba $30 bigger than Facebook. In terms of market cap, it is also $30 billion bigger than eBay and Amazon COMBINED. Thanks to this smashing success, Alibaba founder, Jack Ma is now officially the richest person in China. 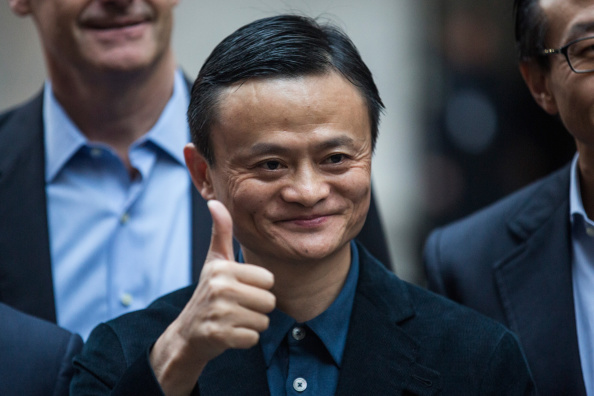 Andrew Burton/Getty Images
Did we make a mistake?
Submit a correction suggestion and help us fix it!
Submit a Correction