10 Pets Who Are Worth Way More Money Than Most Humans

Many people would be ashamed to admit that their pet is worth more than they are, but some have embraced it and taken advantage of it to the fullest extent possible. The sad thing is, many of the pets on this list benefited from having "strange" owners, who, despite being rich, didn't have any family or friends that they were able to deem worthy of leaving their large fortunes to. Here are the 10 Pets Worth More Than Most Humans.

Trouble is the dog that was owned and obsessively loved by the rich real estate developer Leona Helmsley. Helmsley set aside a ridiculous $12 million for her Maltese Terrier, so that the dog could keep up its lavish lifestyle even after Leona passed away. After that happened in 2007, a judge decided to decrease that amount to $2 million, which Trouble was likely still happy with.

Conchita the Chihuahua was once called "the most pampered dog of the world." This tiny pet was owned by Miami heiress Gail Posner, who decided to leave her mansion to Conchita and her two other dogs. That mansion was said to be worth more than $8 million, and Posner also decided to leave another $3 million in a trust for her best friend.

Tommaso the cat went from being a stray, to living in the lap of luxury. The cat was owned by Maria Assunta, who had no children to leave her fortune to. When Maria reached her 90s, she grew concerned about her cat's future and decided to leave Tommaso $13 million after she passed away.

Rimes will go down as one of the most famous, or infamous, poodles of all time. The dog was owned by Ella Wendel, who also left her big fortune to her pet. There has been some debate about exactly how much money was left to Rimes, and how exactly his first name was spelled (Toby or Tobey). Apparently, millions of dollars have been passed down to generations of the poodle, and all of them have had the same name.

Gunther IV has been called the richest dog in history by publications including Time magazine. The dog was owned by Countess Karlotta Libenstein of Germany who decided to leave her entire fortune to Gunther. That dog gave birth to another Gunther, the IV, who was said to be worth more than $370 million at one point! Although the story has been called a publicity stunt by some, Gunther IV was also owned by Madonna and once bought a mansion in Miami.

Guinness World Records once recognized Blackie as the richest cat in the world. This dark colored feline belonged to antiques dealer Ben Rea, who left about $12.5 million to it when he passed away in 1988. Blackie was the last of Rea's 15 cats to survive and was lucky enough to inherit his owner's money.

Gigoo is thankfully the only chicken to make this list. He was owned by British publishing tycoon Miles Blackwell. After his wife passed away, Miles had no one to leave his fortune to, so he settled on his chicken. Gigoo inherited $10 million in 2001 when Blackwell passed away, which would be worth about $15 million today.

Unlike most of the other pets on this list, Grumpy Cat actually "earned" her money and didn't receive it as an inheritance. The cat's "real name" is Tarder Sauce and has been reported to be worth about $100 million, although her owner, Tabatha Bundesen, disputes that figure. Grumpy Cat has been the star of many Internet memes and even starred in her own feature film. 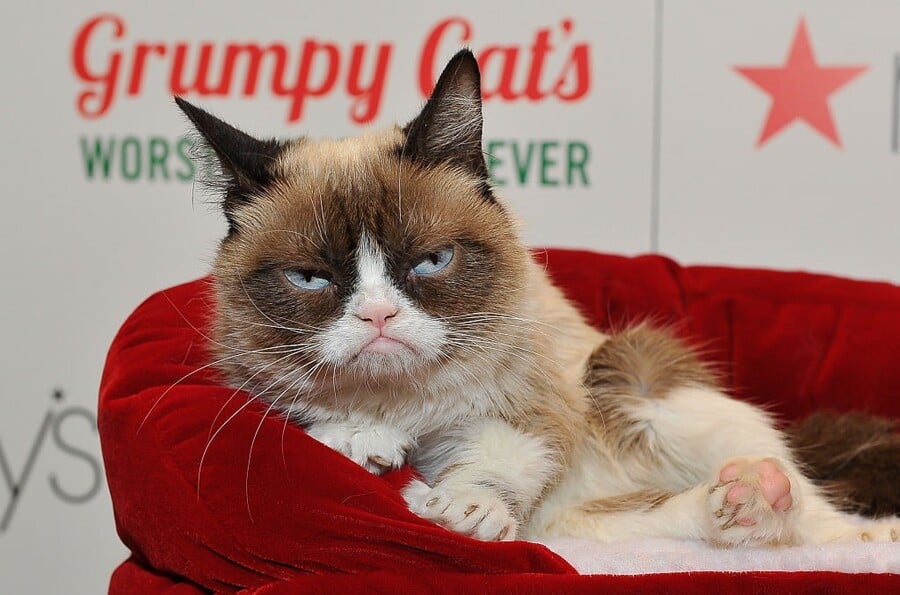 Brajesh Srivastava and his wife Shabista were shunned by their families after they decided to have an inter-faith marriage. Combine that with the facts that the couple had a lot of money, no children, and a pet monkey, and you get one rich monkey in Chunmun. The only bad news for Chunmun is that he may have to split his inheritance of millions of dollars with a female monkey that he was "married" to in an arranged ceremony by the couple in 2010.

Choupette is certainly a lucky cat and belongs to fashion designer Karl Lagerfeld. In 2015 the fashion icon said that Choupette earned $2.2 million for a pair of jobs the cat performed. Lagerfeld has described his cat as being "like a human being, but the good thing is that she's silent." He also explained that Choupette has two personal maids who take care of her and play with her, and that his cat "is the center of the world."