Who Sold The Most NBA Jerseys Last Year? And Do The Top Selling Players Make More Money?

There's just something about NBA swag that people love to show off. You'll see common and obscure jerseys alike all over the place, in obvious settings like games and bars to watch said games, but also just out and about on the street, or even at a doctor's office (as I witnessed recently with a guy rockin' a Shawn Kemp Sonics jersey in the waiting room). The point is, fans love to rep their favorite players and teams.

So which NBA player was the most popular this past season in terms of jersey sales?

It probably won't surprise you, but for the second straight year, it was LeBron James. Realistically, he clinched this title the moment he announced his return to Cleveland. Fans now saw him as a hero for returning home, and Cleveland fans who had previously burned their jerseys had to get a replacement. This is the fourth time, overall, LeBron has topped the jersey sales charts. In addition to the past two years, his #6 Heat jersey was #1 in 2010-11 (his first year with the team), and his rookie #23 back in 2003-2004 was the hottest thing out there. 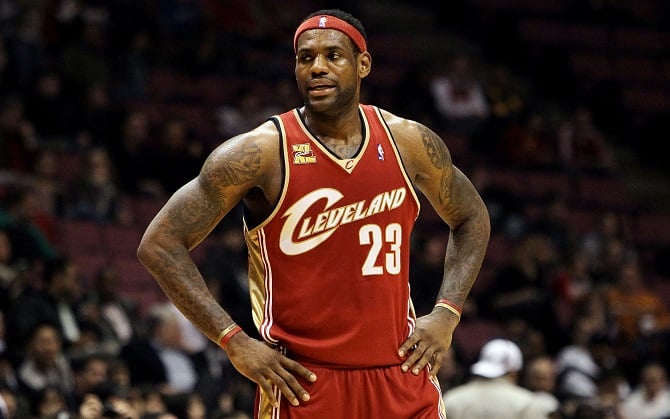 LeBron might not be #1 for long though! Warriors guard Steph Curry was second in jersey sales, up from fifth last year. The sharpshooter has the Warriors locked in as the overall No. 1 seed for this year's playoffs. Interestingly enough, numbers 3-5 on this list only combined to play 113 out of 246 possible games. Kobe Bryant, Kevin Durant and Derrick Rose all had plenty of people buying their number. Maybe the fans thought each player's respective coach would mistake them for the actual player, and would sub them into the game.

Those player's teams are well-represented in overall merchandise sales, as well. The Bulls are tops on that list, with the Cavs, Warriors, Lakers and Thunder behind them. Not a big surprise there either–think of how many Bulls hats you see, whether or not you are in Chicago.

The biggest fan of LeBron's (and Irving's) massive amount of jersey sales? His teammate Brendan Haywood, a journeyman center who's only appeared in 21 games for the Cavs this season. Since 1995, all NBA merchandise sales have been split evenly amongst teams. That means that LeBron, Irving, Haywood, and the rest of the Cavs roster all make the same amount from what they sell, even if only three people buy a Brendan Haywood jersey. Hey, you know those fans exist.