What Was Muhammad Ali's Net Worth At The Time Of His Death?

By Brian Warner on June 5, 2016 in Articles › Celebrity News

As you no doubt have heard by now, Muhammad Ali passed away yesterday at the age of 74. Ali was a true international icon who will be remembered for decades and perhaps even centuries to come. And as you might imagine, Ali was a Champion in both the ring and the bank thanks to lucrative endorsement deals, investments and boxing prizes. But exactly how much was Muhammad Ali's net worth at the time of his death? Let's take a look at the biggest number from his career…

Muhammad Ali earned millions during his career as a fighter. Not quite on the same level as Floyd Mayweather, but the times and economics of boxing were different during Ali's career. Ali was not the first boxer to earn $1 million for a fight, that honor went to Gene Tunney in 1927 for his rematch against Jack Dempsey. But Ali did earn $2.5 million in 1971 to fight Joe Frazier. That's the same as $15 million today. He then earned $5.45 million fighting George Foreman in 1974. That's the same as $26 million today.  Ali's biggest career paycheck came in 1980 when he took home $7.9 million for fighting Larry Holmes. Interestingly, when adjusted for inflation, $7.9 million in 1980 is equal to $22 million, which technically makes Ali's $5.45 million 1974 check the biggest payday of his career.

Unfortunately, over the decades many of Ali's millions were squandered through a combination of bad management and poor spending habits, especially by his extended family members. At one point Muhammad was paying $64,000 per month to support his extended family. In the mid to late 80s, there were rumors that Ali was nearly broke or at the very least having a serious cash shortage. Ali gave a friend $40,000 to set up a sports management company. Years later that same friend was arrested after he allegedly looted $21 million from the Chap. That friend eventually served five years in jail.

At some point, his representatives cleaned their act up and began to help the Champ earn back millions through licensing and endorsements. To handle all the endorsements, Ali formed a corporation which he appropriately called GOAT LLC (Greatest Of All Time).

Muhammad Ali's biggest payday came in 2006 when he sold an 80% stake in GOAT LLC to a company called CKX for $50 million. 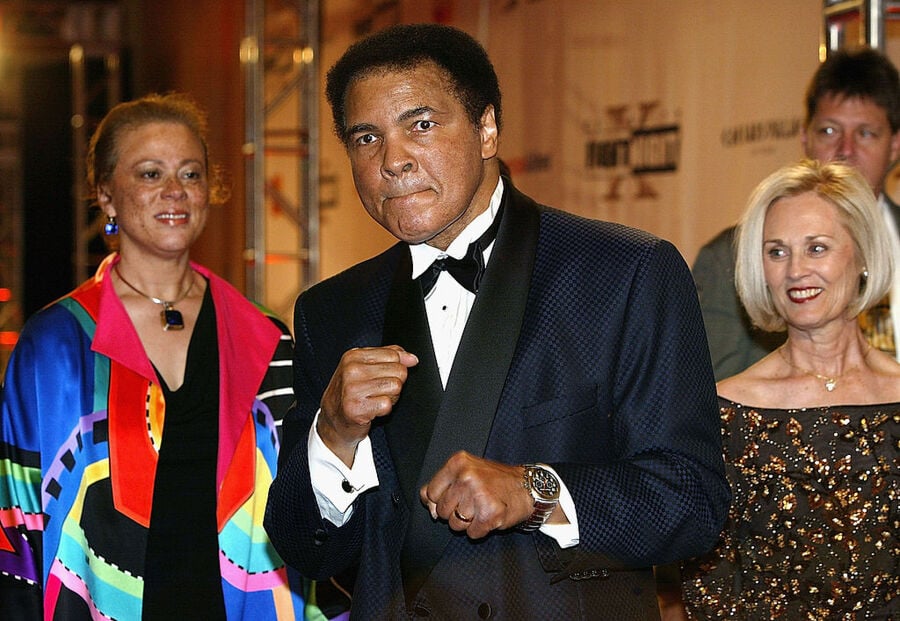 Ali's name and likeness has been a well-protected asset over the last decade. His 20% stake brings in $5-7 million per year for the Champ and his family.

When it was all said and done, at the time of Muhammad Ali's death, his net worth was $50 million. There have been some reports that his net worth could have been as high as $80 million, but we believe that number to be false.

On the other hand, the value of Ali's estate could go up significantly if his family decides to sell the remaining 20% stake in his image rights. At a rate of $5-7 million per year in revenue generated, that 20% stake alone could be worth an additional $30-50 million.

Muhammad is survived by his wife of 30 years Lonnie Ali and nine children.