By Brian Warner on July 1, 2015 in Articles › Celebrity News

When Mitt Romney ran for President back in 2012, there was a lot of controversy over his refusal to make his tax returns public. Every other viable candidate released their tax returns going back several years. Barack Obama released 12 years worth of returns. But Romney was stubborn. He didn't think it was necessary or relevant to his candidacy. He also likely thought that showing off his insane personal income levels would taint his image to average Joes. To Romney's credit, Presidential candidates are actually NOT required to release their tax returns. It only became a loosely followed tradition in the late 70s.

Buckling under the pressure, Romney did eventually release two years worth of tax returns, for 2010 and 2011. Those returns taught us a bunch of interesting things. First, Mitt's real first name is actually Willard. Second, Mitt earned adjusted gross income of $22.6 million and $13.7 million in those years, respectively. And third, thanks to the fact that capital gains income is taxed at a lower rate, Mitt's effective tax rate averaged around 14%. For comparison, I personally paid and effective tax rate of around 46% in 2014 🙁

For some reason, showing that you pay a high effective tax rate has become a bragging point for Presidential candidates. Romney was slammed for paying such a low rate while Obama averaged out at 25%. Why should someone be faulted for paying less in taxes? I actually think that's a strength!

So what does all this have to do with Jeb Bush? In the spirit of transparency, today Jeb released his tax returns. And he didn't just release one or two years worth of returns. Not 10 years. Not 15 years. He went all out and released every single tax return from the last 33 years. And lucky for you, I just spent the last hour digging through each one! 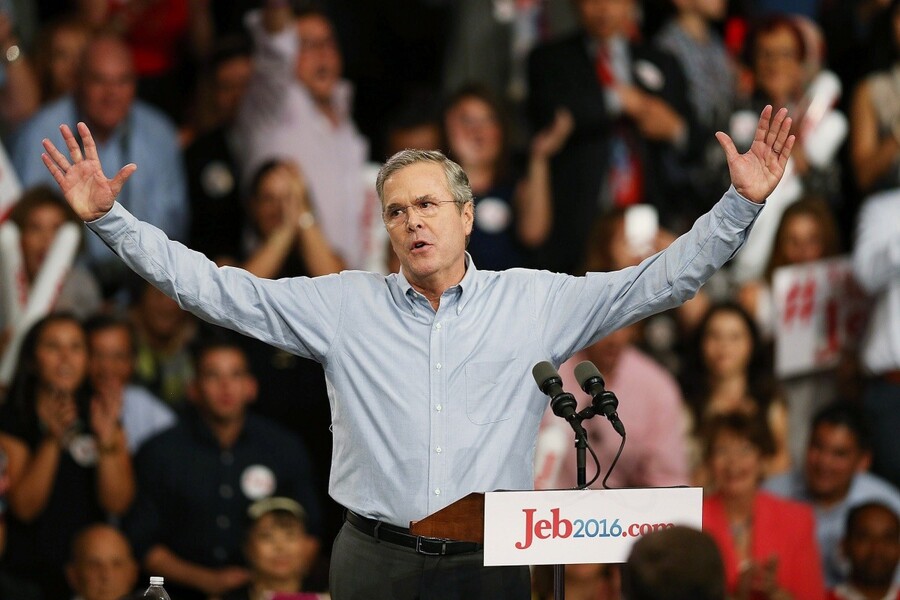 Here are some fun things I just learned about Jeb Bush thanks to his tax returns:

1) His real name is not Jeb. "Jeb" is actually an acronym for his initials "John Ellis Bush". That would be like if I started going by the name Beedeedoubleyou.

3) Over those 33 years, Jeb paid an average effective tax rate of 36%, which he is quick to point out is higher than the 30% Hillary Clinton paid in 2014. Apparently, we're supposed to be impressed by that. I'm not. Doesn't every extremely wealthy Flordian find some loophole that allows them to never pay taxes at all?? Isn't that the whole point of being a wealthy person and living in Florida?

5) Between 1981 and 2013, Jeb's lowest annual income was the $43,498 he earned in 1981. That was also the first year he really worked in the private sector. It took about a decade for Jeb's real estate venture to start paying big dividends. His income fluctuated with the rocky Miami real estate market between 1981 and 1991. But in 1990 he did take home $1.2 million, which was up 10X from the year before.

Like I said previously, I spent about an hour digging through Jeb's returns. I also put his annual income into a spreadsheet which I turned into this fun little chart: 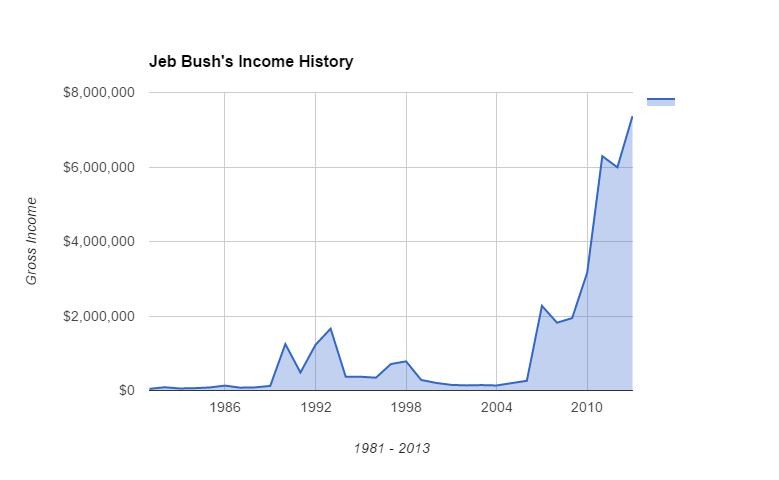 And for those who are curious, here is exactly how much money Jeb made every year between 1981 and 2013: