Todd McFarlane, the comic book auteur best known as the creator of Spawn, is also known as an avid baseball fan and collector of memorabilia relating to the sport. One of his most prized possessions is the ball that represented Mark McGwire's record 70th single-season home run – even though market forces have determined that it's a lot less prized than it used to be.

How much less? With taxes and fees, McFarlane paid a little over $3 million for the ball shortly after the end of the 1998 season, but now TMZ reports that due to subsequent developments like McGwire's record eventually being broken and the revelation that McGwire was using steroids while his legendary home run showdown with Sammy Sosa was going on, McFarlane would be lucky to get $500,000 for it. 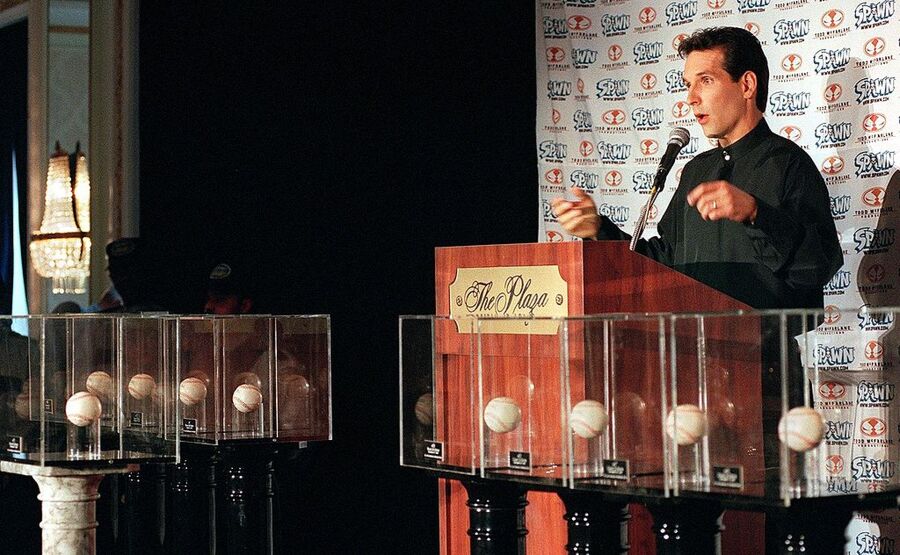 One sports memorabilia expert estimates the ball's value to be in the $250,000 to $300,000 range, while another more bullish expert goes as high as $400,000, and both agree that a climb back to its $2.7 million gavel price is unlikely in the foreseeable future.  Fortunately for McFarlane, his purchase probably wasn't made as a financial investment, and he was recently seen on the ESPN 30 for 30 documentary on the McGwire/Sosa home run rivalry showing the ball off.

Interestingly, McFarlane also owns another baseball that could be said to be partially to blame for the depreciation of his McGwire one. Barry Bonds broke McGwire's single-season home run record in 2001, hitting 73 home runs for a record that still stands today. McFarlane reportedly paid $500,000 for Barry's #73 home run ball.

Of course, while few expect McFarlane ever to get a return on his $3 million investment, the value of the ball could climb if the ESPN documentary draws collector interest towards items relating to that 1998 home run chase, which is exactly what happened with Michael Jordan and Chicago Bulls collectibles after the release of The Last Dance. But McFarlane is doing OK financially in any case, and is set to make his feature film directorial debut with an upcoming new Spawn movie, so he's probably not losing too much sleep over the monetary value of his baseball collection.