On Sunday, PGA Tour caddy Michael Greller stood a few feet away, as sports history was being made. Greller's age is closer to 40 than 20. At the moment, he has 8,400 twitter followers and a relatively anonymous life. Not that long ago, Greller was working as a high school math teacher, earning around $50k per year. But thanks to four rounds of golf at Augusta this weekend, his life is about to change forever. Michael's journey to get to this point was ten years in the making. His journey involved science labs, hopping some ropes, and a random connection to golf's next big thing.

Grellar got his start as a caddy by literally hopping the ropes to caddy for a player who was carrying his own bag at an amateur event long ago. The isolated experience turned into a weekend hobby. Grellar, a science teacher by day, had weekends and the summers to attend events, get outside and see up close the game he has loved for years.

It was in 2011 that Grellar was randomly paired with a promising young prospect named Jordan Spieth. Whatever happened during that four-hour walk apparently resonated with Spieth. After playing one year at Texas, Spieth went pro. One of his first calls he made was to Grellar, gauging interest to see if he would leave his life behind to caddy for a PGA Tour rookie. 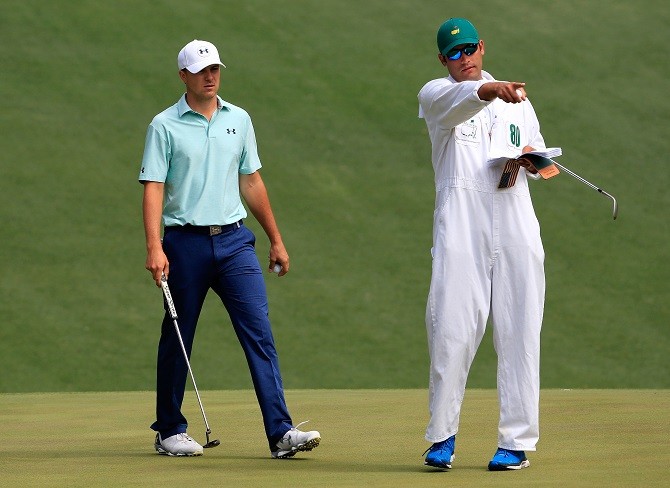 Being a caddy can be extremely profitable. While there is no set salary, the president of the Professional Caddies Association (PCA) said most caddies get a 10% cut when golfers win a tournament. When coupled with bonuses, some caddies can earn more than $1 million per year.

On the other hand, being a caddy can be extremely risky. Caddies operate as independent contractors. There is no 401K, no summer vacation, no union-negotiated health plan. If a golfer misses a cut, there's no paycheck. Caddies must also foot their own bill to get to the tournament and stay somewhere.

Grellar took the plunge. He recently told the Golf Channel that it was worth the risk for one year to see how things would work.  So far, the leap of faith has led to a pot of gold. Assuming the PCA is correct, Grellar's 10% cut for Spieth's win at Augusta would pocket a $180,000 payday. Over the last month, estimates suggest Grellar has pocketed nearly $400,000. With Spieth's career earnings already topping $14 million, you can see why Grellar is loving life at the moment.

Keep in mind, Spieth is just 21. Golfers like Tom Watson, Phil Mickelson, and Ben Crenshaw, a mentor of Spieth's, have had the same caddy for decades. Golfers also can win in their 40s and move into the Champion's Tour at 50. Assuming Spieth and Grellar stay on the same page, Grellar could soon emerge as one of, if not the highest-earning caddy in the world.

It seems fitting a science teacher would conduct an experiment. But instead of a using a bunsen burner and white lab coat, it was a golf bag and caddy outfit. The results of this experiment certainly look life-changing at the moment.