Alex Rodriguez hit his 660th home run on Friday, an otherwise historic feat, tying Willie Mays on the all-time home run list. And as a part of A-Rod's whopping 10-year, $275 million contract signed back in 2007, the Yankees were supposed to pay him $6 million for reaching the milestone.

But surprise, surprise, that bonus is not being paid. A-Rod can actually potentially earn additional $6 million bonuses for reaching the other home run milestones, which include tying Babe Ruth at 714, Hank Aaron at 755, Barry Bonds at 762, and becoming the all-time home run leader by surpassing Bonds. That's a grand total of $30 million, and as of right now, the Yankees have indicated they're going to pay exactly NONE of it. GM Brian Cashman has publicly come out and said the team isn't planning on paying, and during the winter, the team privately told Rodriguez not to expect to receive the bonus. 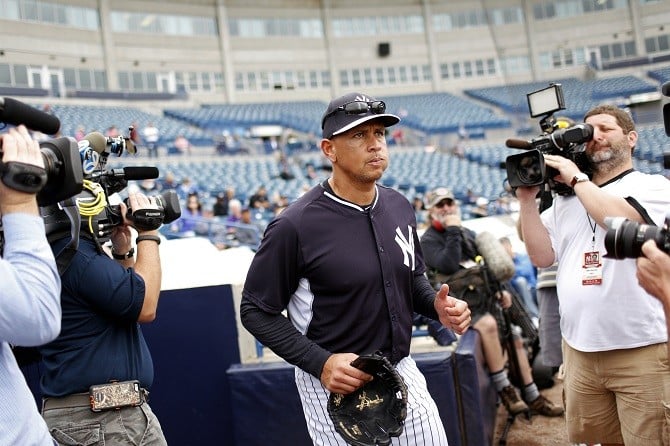 Language in the contract says that the bonus would go to Rodriguez if the team used the home runs as part of its marketing efforts. And because the slugger missed all of last season for violating Major League Baseball's performance-enhancing drug policy, the Yanks claim they can't market his milestones.

The actual phrasing is that the Bronx Bombers have the "right to designate" certain home runs as milestones. They don't plan to do that with his long shots. Rodriguez, meanwhile, will probably point to the part of the contract that says the team should act "in good faith." Then again, he missed an entire season because of performance-enhancing drugs, and hasn't exactly been the picture of positive decisions during his time in New York.

For the team's part, they haven't done any marketing of home run #660. No t-shirts, no plaques, no memorabilia of any kind. Collectors even say the ball is barely worth anything. Hopefully no fans got into a fight trying to retrieve it.

Rodriguez, meanwhile, has, by all accounts, been a good guy to have in the clubhouse this year. Teammates and Cashman have described him as being "all business" and "working hard." It's certainly a step in the right direction for the 39-year-old. And let's be honest, he's made so much money during his career that a potential $30 million is just a small blip in his overall earnings. Just like it's a small blip in the Yankees overall net worth. Now, we'll simply have to see which side budges first.