The Biggest Book Advances Of All Time

The sad truth of the matter is that writing books is rarely a solid way to make a living, let alone a fortune. Sure, there are exceptions – JK Rowling and James Patterson come to mind – but most authors just don't make big advance money or much money from sales royalties. Now, if you're a famous person with a true story to tell, that changes things.

When publishers buy a book from an author, the advance isn't free money –its value is a prediction of how well the publishers think a book might do. An advance is just that—an advance of the future royalties earned. If a book doesn't make as much as the advance is, the author could end up owing their publisher. With books written by public figures, politicians, and celebrities, the built-in audience and curiosity make publishers more confident that the book will sell so many copies that it will surpass the amount of the advance.

Hillary Clinton made news when she signed a book deal with Simon & Schuster for $14 million ($15.5 million adjusted for inflation). The book, Hard Choices, detailed her time as Secretary of State under Barack Obama. Published in 2014, the book focused on America's role in international diplomacy, her views on the turbulence in the Middle East, relations with China, the ouster and death of Libyan leader Moammar Gadhafi, and the assassination of Osama Bin Laden. The $14 million advance was far more than the $8 million she received for her 2003 book, Living History. Her husband, former President Bill Clinton received $15 million for his post-presidential memoir My Life. 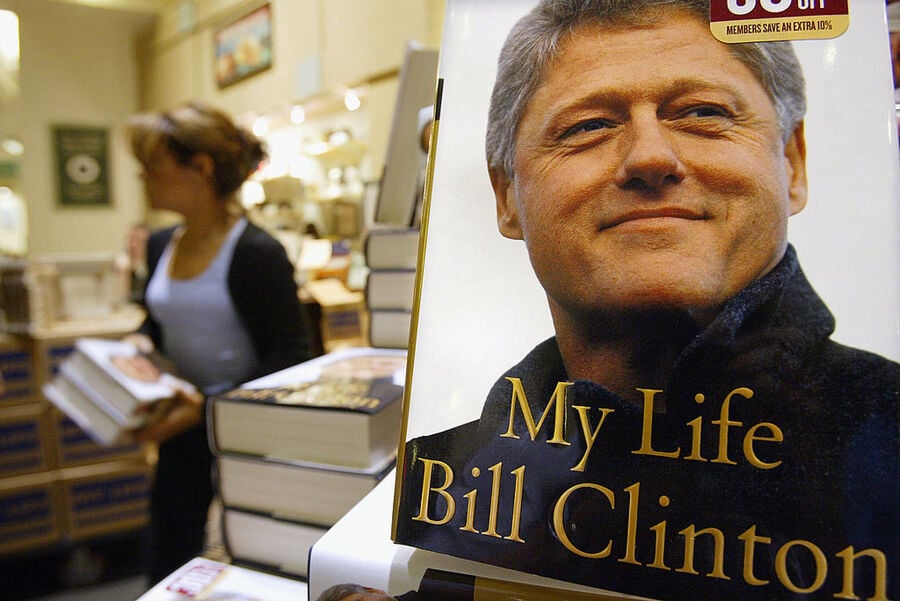 At the time, the book advances for the Clinton books were considered astronomical. Then Barack and Michelle Obama signed a book deal after his two terms in office were up. That advance broke all records with a combined $65 million advance covering multiple books. Barack's memoir alone earned a $20 million advance.

Does that mean Barack Obama earned the biggest book advance ever? Kind of, but also technically NO.

Politicians, in general, have strong bargaining power when it comes to book advances. Former President George W. Bush's 2010 book Decision Points garnered the 43rd President of the United States a book advance of $7 million a decade ago is worth $8.3 million today. Dick Cheney received an advance of $2 million for his 2011 memoir In My Time. Cheney's advance would be worth $2.3 million today. Former Chairman of the Federal Reserve received an advance of $8.5 million for his 2007 book The Age of Turbulence, which is $10.6 million adjusted for inflation. Former Governor of Alaska Sarah Palin's 2009 book Going Rouge, earned her a book advance of $1.25 million ($1.5 million adjusted for inflation). Another public figure who cashed in huge with an $8.5 million advance is Pope John Paul II's 1994 book Crossing the Threshold of Hope. That is worth $14.85 million today!

It's not just politicians, of course, that earn big book advances. Celebrities do too. Demi Moore caused some waves in 2019 when her long-awaited memoir, Inside Out, was released. She signed the deal for that book more than five years before it was released and received a $2 million advance at the time.

Celebrity can guarantee a built in audience for a book. Moore's book, for instance,  debuted at number one on The New York Times' Nonfiction best-sellers list and the Hardcover Nonfiction best-sellers list. Comedian Sarah Silverman's 2010 book Bedwetter delivered a $2.5 million ($3 million adjusted for inflation). Lena Dunham's 2014 book Not That Kind of Girl: A Young Woman Tells You What She's Learned, earned her a $3.7 million ($4 million today) advance. Tina Fey's 2011 book Bossypants had a $6 million ($6.9 million today). Jerry Seinfeld received a $7 million advance for 1993's Seinlanguage. In 2020 dollars, that is $12.5 million.

If you have a story to tell and you're hoping to get a big book advance and you're not a politician, public figure, or celebrity, it helps to have had something bad happen to you or to have been part of an infamous event in history. Amanda Knox, who was falsely accused and convicted of murdering her roommate on a semester abroad in Italy released her memoir Waiting to be Heard in 2013 and received a $4 million advance ($4.4 million today). Other people who've lived through horrific things and wrote memoirs include Elizabeth Smart, who was abducted from her Utah bedroom and Michelle Knight, one of the Ariel Castro kidnapping victims from Cleveland. Basically, to get a big book advance your name or the event you lived through should be recognizable.

The Biggest Book Advances Of All Time

#5: Amy Schumer"The Girl With The Lower Back Tattoo" – $9 million

As of this writing, Barack Obama earned the biggest book advance of all time when he was paid $20 million in 2017 for what became "Dreams from My Father". But if we look at inflation, Bill Clinton's $15 million – which is the same as $22 million today, slightly out-edges Barack for the top title.