By Travis Pulver on June 7, 2015 in Articles › Celebrity News

When the Golden State Warriors let Mark Jackson go, many people thought the team was insane. Yes, they faltered in the playoffs in Jackson's final season, but the team had also won 50+ games for this first time since the 1993-94 season. It probably didn't help that Jackson and the front office clashed a lot. Either way, Jackson's departure opened the door for an unlikely coaching candidate: Steve Kerr.

The move was nuts. Yes, he was a great player in his day, having won five NBA titles. He played under some of the best coaches in the business. He had front office experience, having served as the Phoenix Suns general manager for a few years, but he had never coached.

Yet since the New York Knicks were also trying to sign him, the Warriors gave put forth a pretty hefty deal for any coach… let alone a newcomer – five years, $25 million – making him one of the higher paid coaches in the league before he even coached his first game. 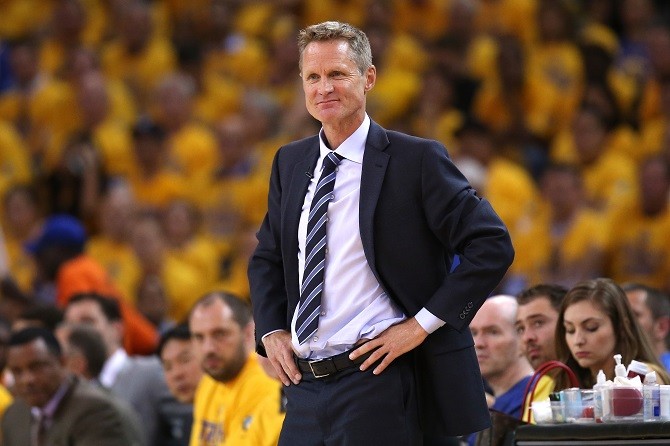 For a team to take a former player and make him a coach is not really a novel idea. Jason Kidd had recently accomplished the transition retiring from the Knicks and getting hired almost immediately by the Brooklyn Nets. Kidd has since left Brooklyn, and is now coach of the Milwaukee Bucks.

Kidd, who also has an excellent pedigree, did not make nearly as much as Kerr in Brooklyn (four-year, $10.5 million, with $7.5 million guaranteed), but is making close to Kerr's money in Milwaukee (three years, $12-15 million).

The bump made sense for Kidd, since he did have some experience under his belt and did a good job in Brooklyn.

Was it a deal? Did the Warriors get away with one here, or is Kerr laughing all the way to the bank like Knicks coach Derek Fisher (also a $5 million man, but his team played horrible)?

Conventional logic would say look at what he's done! Of course he's a bargain. However, he does have a roster full of talent which makes his job much, much easier than Kidd's or Fisher's. The team did win a franchise-record of 67 wins and has made it to the NBA Finals, the first time in 40 years for the Warriors, so he has to have done something right.

Either that, or the talent-laden roster gelled better than the year before and that's why they won more games.

So – is he a bargain or what? That is likely a question to which we will never know the answer, because Kerr's roster is so full of talent. We may need to see him deal with some controversy before we can really call him a bargain. However, as long as the team keeps winning fans, the team's owners won't really care.