By Brian Warner on January 22, 2015 in Articles › Celebrity News

Saudi Arabia's King Abdullah just died at the age of 90.

Abdullah was one of 45 sons fathered by the founder of modern-day Saudi Arabia, Ibn Saud. Ibn also had an unknown number of daughters by his estimated 22 wives. Of those 45 sons, 36 survived to adulthood and four served as King prior to Abdullah. Today the Saudi royal family includes over 15,000 extremely wealthy princes, cousins, wives, brothers, etc…

Ibn Saud crowned himself King of Saudi Arabia in 1932 after decades of brutal wars with tribal neighbors and the Ottoman Empire (modern-day Turkey). If you think the wars were over oil, you are wrong. When Saudi Arabia finally became a recognized state, it was literally the poorest country in the world. At the time, Saudi Arabia was mostly believed to be a desert wasteland with zero natural resources. To make matters worse, the decades of wars had rendered the royal family flat broke. Actually, the entire Kingdom was essentially destitute. Most Saudis, including the royal family, subsisted off extremely limited agriculture and some minor tourism revenues from people making Islamic pilgrimages to Saudi landmarks like Mecca.

Ibn Saud and Saudi Arabia needed a miracle, and they got one.

And not just a small miracle like candles lasting eight nights instead of one. The House of Saud was bestowed with what will likely go down as the greatest and most lucrative natural resource miracle in human history. As it turns out, the barren wasteland that made up 90% of Saudi Arabia's territory was sitting on the world's largest deposits of oil.

World War I had just ended and it was clear that oil was going to be the most important natural resource on earth for the foreseeable future. At the time, thanks to discoveries in Texas and the mid-west, the United States was the world's leading producer of black gold. In fact, significant quantities of oil had not been discovered anywhere in the Middle East at that time. Modest outputs were discovered in Persia (modern-day Iran), and Bahrain, but the geological community's general consensus was that there was no oil in Saudi Arabia.

On the other hand, there were persistent rumors and local legends that oil had been seen seeping out of the ground in some remote Saudi villages. So the Kingdom pressed ahead. Starting in 1935, a joint partnership between Standard Oil and the Texas oil company called CALTEX began drilling near a desolate eastern-Saudi village called Dammam. After three years of constant problems and setbacks, CALTEX made a discovery that would change the Kingdom of Saudi Arabia, the Middle East, and the world, forever.

Then came the Ghawar oil field, which began full-time production in 1951. That field turned out to be the largest single deposit of crude oil on the planet. During its lifetime, Ghawar is expected to produce 75-83 billion barrels of oil. Today, six of the world's 30 largest oil fields are located in Saudi Arabia.

And who owns all of these oil fields? ONE FAMILY. 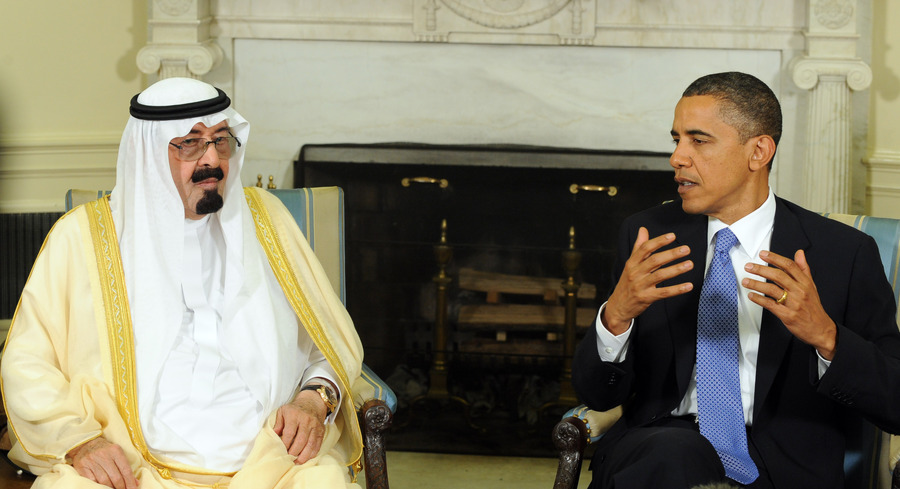 Over the next 50 years Saudi Arabia quickly grew into one of the largest, wealthiest and most powerful countries in the world. Ibn Saud ruled the Kingdom until his death in November 1953. As we mentioned previously, the extended Saudi Royal family consists of more than 15,000 people. Today those 15,000 people are believed to control a staggering $1.4 trillion worth of wealth.

Even more amazingly, the vast majority of that $1.4 trillion sits in the bank accounts of fewer than 2000 people. Prior to his death today, King Abdullah was personally worth $18 billion, which made him one of the richest royal people in history and the 58th richest person on the planet currently. Abdullah's nephew Prince Alwaleed Bin Talal Alsaud is worth $30 billion and is the 19th richest person in the world.

All members of the Al Saud family are entitled to receive monthly stipends generated by oil revenues. The entire distribution process is managed by finance ministry's Office of Decisions and Rules. The amount of the stipend depends on an individual's family distance to the King. A lowly member from a distant branch of the family might earn as little as $800 a month. More prominent members of the family earn hundreds of thousands, even millions of dollars every month. Like any corporation, at the end of the year family members get bonuses based on that year's profits. Every year, the Office of Decisions and Rules distributes between $20 and $40 billion on the form of stipends and bonuses.

According to Saudi royal laws, the crown passes to the next son of Ibn Saud, not one of Abdullah's own sons. That makes the 79 year old Crown Prince Salman, the likely next successor. However, Prince Salman has also recently been experiencing health problems including dementia. Furthermore, last March, Abdullah named his youngest brother Prince Muqrin "deputy heir", a brand new title that signaled the possibility that he might jump the line over some of his older siblings. But even beyond the idea that he would be skipping older siblings, there is some controversy about Muqrin's claim to the throne. First off, his mother was never formally married to Ibn Saud. Secondly, it's widely known that Muqrin's mother was a Yemeni concubine. Put more harshly, she was one of Ibn Saud's sex slaves.

According to Reuters, the King's direct heirs have recently been calling on the family at large to recognize Murqrin as the rightful heir. Murqrin is 69 years old.

That fact makes picking Abdullah's successor exponentially more controversial. Think about it. Up until now, if you were one of Ibn Saud's sons, you were just waiting your turn to be king. Therefore, if you're the son of whoever is the next King, you will be fast tracked in the line of who gets to be King at some point. Even if you're never King, by being the son of the King you'll earn much higher stipends and bonuses for the rest of your life. Meanwhile hundreds of your male cousins who lost out because their father wasn't chosen to be King, will hate your guts. For example, the odds of one of King Abdullah's sons becoming a King in the future just basically dropped to zero. If only he had held out a few more years!!!

It is also unclear right now what will happen to King Abdullah's $18 billion personal fortune. Most believe it will be carved up among his 16 children and 11 wives. There might also be some allocations to charity. During his life, Abdullah was noted for his generosity. He donated $500 million to the UN's World Food Program in 2008, $60 million to support victims of the Sichuan earthquake in China in 2008, and $10 BILLION to establish the endowment for the King Abdullah University of Science and Technology.

So far there is no official word on succession or what will happen to Abdullah's wealth. We'll keep you posted when new info comes out.