By Brian Warner on March 1, 2014 in Articles › Celebrity News

Every actor in Hollywood should have the words "strike while the iron is hot" tattooed on their forearm. In the entertainment industry, careers go up and down faster than Kim Kardashian at a… never mind. One minute you're the hottest young star in the world, raking in huge paychecks, being wooed by every major studio to star in the next big movie franchise. The next minute, you're a day old bagel tossed into a trash can on Sunset Boulevard, never to be heard from again. That's why it's crucial for actors to strike while the iron is hot, because the iron can turn freezing cold on a dime. On the bright side, if your career does turn cold, that doesn't mean it's over forever. Just look at Ben Affleck, John Travolta and most impressively, Robert Downey Jr! Sandra Bullock is an actress who definitely understands the hot-iron principal and proved it with the movie Gravity. Sandra, fresh off winning a Best Actress Academy Award for The Blind Side, inked a deal to appear in Gravity that ended up making her an absolutely ASTRONOMICAL amount of money…

Sandra Bullock won the Best Actress Academy Award for The Blind Side on March 7, 2010. A month earlier Angelina Jolie and Robert Downey Jr had tentatively signed on to star in Alfonso Cuaron's epic space drama. Angelina soon dropped out of Gravity to direct the Bosnian war film "In the Land of Blood and Honey", which she also wrote. Robert Downey Jr dropped out as well. Warner Brothers, the studio behind Cuaron and Gravity, then approached Scarlett Johansson, Blake Lively and Natalie Portman to fill the lead actress role. Eventually all three actresses were set aside. Warner Brothers then approached Sandra, who was still glowing from her big Oscar win.

At this point, Warner Brothers was getting a little desperate. One major problem was the fact that Gravity basically featured one actor on screen for 90% of the movie. In order to hold the audience, the studio knew it needed a HUGE STAR. And at the time, no one was huger than Sandra Bullock. 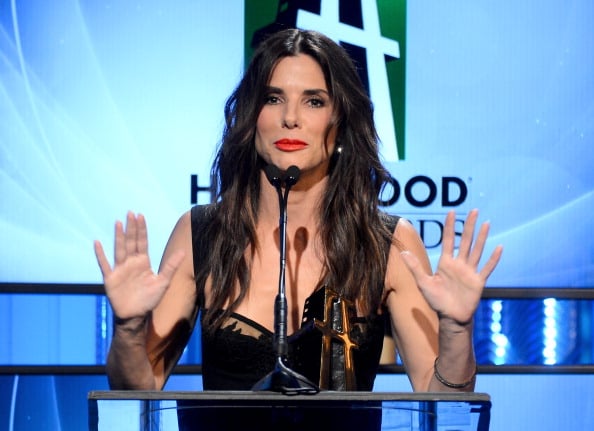 But what was she gonna cost? Sure she was gonna demand a big upfront paycheck, but that wasn't going to be enough. Every studio in town would be lined up eager to fork over a big fat nine figure salary for Sandra's next feature. Another problem was that the production of Gravity wasn't exactly going to be a breeze. Writer/director Alfonso Cuaron himself estimated that the movie would take a year to complete the movie. Sandra easily could have opted for a huge paycheck to be in a goofy romantic comedy that would take 3-4 months, at most. So the deal to land Bullock needed to be really really really sweet. Oh, and by the way, instead of taking a year to complete, Gravity actually ended up taking four and a half years. Apparently filming in zero-gs isn't exactly a moonwalk in the park.

In order to get Sandra to sign up for Gravity, Warner Brothers made her an offer that she couldn't refuse. The deal guaranteed Sandra an advance of $20 million upfront, plus 15% of the film's eventual "first dollar" gross revenues. First dollar gross meant literally for every dollar the studio ever received for Gravity, 15% would go to Sandra before any costs for production or marketing were taken out. Sandra was also entitled to the same percentage earned from DVD rentals, merchandise, TV licensing…

As you probably know now, the four and a half years it took to make Gravity were well worth it. Gravity was a smash hit at box offices around the world. It eventually earned $270 million domestically and $435 million internationally. As of March 2014, the film's total receipts are $705 million and could eventually top $750 – $800 million. Movie studios generally get 50% of a film's box office revenues, the other half stays with the theaters. Therefore, Warner Brother's gross revenues for Gravity will eventually top $375 – $400 million on a budget of $110 million. As we mentioned, Sandra's contract entitled her to 15% of the gross revenues after her $20 million advance was paid back. Using the $400 million number, that would mean Sandra's 15% would be worth $57 million. Bringing her total income from Gravity to a whopping $77 million.

$77 million. From one movie. That's the seventh largest paycheck ever paid to an actor for a single movie. It's $7 million more than Tom Hanks earned from Forrest Gump.

And it gets better. Not only did Sandra earn an astronomical fortune from Gravity, her performance was good enough to be nominated for another Best Actress Academy Award. I wonder what kind of deal she line up next if she wins again! The iron is clearly still hot so gotta keep striking!