Sam Simon Made Hundreds Of Millions Off The Simpsons – Then Gave It All Away To Charity.

By Brian Warner on March 9, 2015 in Articles › Celebrity News

Sam Simon is a name you have probably seen on your television set hundreds, if not thousands of times, but you might not be able to pick his face out of a lineup. Between 1979 and 1993, Sam Simon was one of the most influential television writers/producers in the world. He left indelible marks on two of the most classic sitcoms of all time: Cheers and Taxi. Later in his career, Simon also helped produce and direct hits like The Drew Carey Show, Friends, House of Cards and Anger Management. Oh, he also co-developed and executive produced on a little show called The Simpsons. Impressively, Sam only worked on The Simpsons over four seasons, yet he still earns tens of millions of dollars every year off residuals, to this day. Perhaps even more impressive,  after essentially retiring at the age of 38, Simon dedicated his life to philanthropy with a special focus on animal related causes. Sadly, in late 2012, Sam was diagnosed with terminal colon cancer and given 3-6 months to live. He ended up living for over two years. Unfortunately, Sam died earlier today at the age of 59. Throughout his life, Sam was one of the most famous and active animal rights advocates in the world. In the last years of his life, he literally gave away hundreds of millions of dollars to various animal charities. He was a truly incredible person and the world will miss him. This is his inspirational life story… 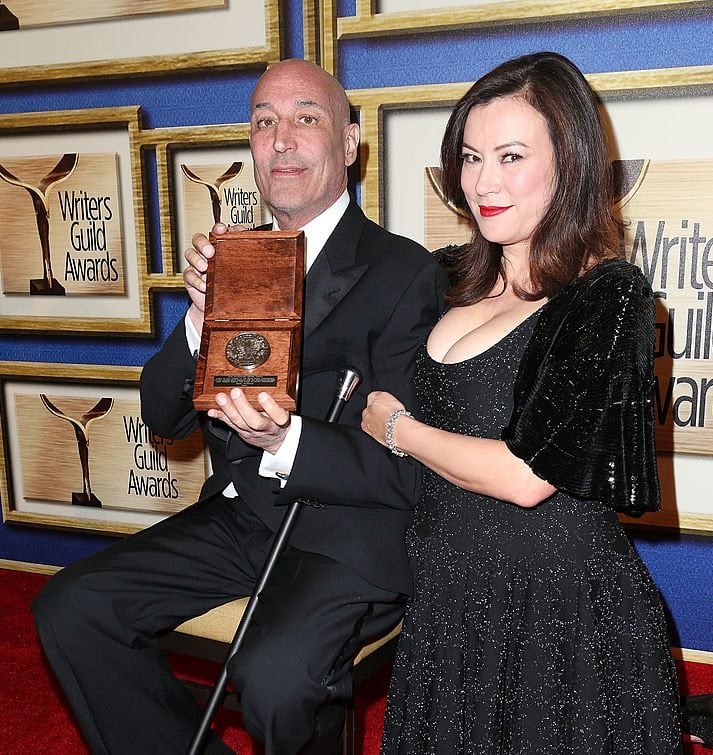 Sam Simon grew up in Beverly Hills, California, on a street where his neighbors where Groucho Marx and Elvis Presley. He was recruited to play football at Stanford, but quit the team after his first practice. Instead of playing football, Simon became the cartoonist for the Stanford student newspaper. While still an undergrad, he was hired by both the San Francisco Chronicle and Examiner newspapers as a sports cartoonist. This early passion for cartoons landed him his first job after college at a Los Angeles based animation studio called Filmation. At Filmation, Simon worked as a storyboard artist on the cartoon "Fat Albert and the Cosby Kids." At some point in 1981, a friend encouraged Sam to submit an unsolicited "spec" script to the creator of the hit show "Taxi." Incredibly, the producers loved his script so much that they not only turned it into a full episode, they also hired Sam as a full time writer. He was just 26 years old. By 1983, when he was 30 years old, Simon had risen to the level of showrunner (the most important day-to-day manager on a show). He was the youngest network television showrunner of all time until 26-year-old Josh Schwartz ran "The O.C." in 2003. After Taxi ended, Sam worked as a staff writer on the first three seasons of another little sitcom called "Cheers."

Origins Of The Simpsons

Taxi was created and executive produced by the prolific writer/director/producer, James L. Brooks. In 1987, while serving as executive producer on The Tracey Ullman Show, Brooks had an idea. He wanted to feature short animations when coming in and out of commercials. For one of the cartoons, Brooks reached out to animator Matt Groening, whose "Life in Hell" series was syndicated in newspapers around the country. The first obvious concept was to simply create an animated version of the Life in Hell strips. But after learning that he would be forced to rescind his life's work's publishing rights, Groening decided to pitch a brand new series at the very last minute. The short series Groening pitched revolved around a dysfunctional family called "The Simpsons." Tracey Ullman cast members Dan Castellaneta and Julie Kavner even volunteered to provide voices for cartoon parents Homer and Marge Simpson.

After running as short animated bumpers for two years on The Tracey Ullman Show, audiences were demanding to see more of The Simpson family. James L. Brooks paired Matt Groening with his old friend Sam Simon, and set them out to develop The Simpsons into a full time, half hour show. On December 17, 1989, The Simpsons premiered on Fox. Twenty four seasons later, and The Simpsons has produced 528 episodes and is considered one of the greatest television shows of all time. Tracey Ullman, whose show was cancelled in 1990, tried unsuccessfully to sue for a piece of The Simpsons after it became a worldwide phenomenon.

Sam Simon was the creative driving force of the early days of The Simpsons. He served as creative supervisor and hired the entire first writing staff. Simon also helped design the fictional world of Springfield and created the characters of Mr. Burns, Chief Wiggum, Bleeding Gums Murphy and Dr. Hibbert, to name a few. Simon never believed the show would last, so his goal for the first season was simply to create 13 episodes that his friends would find funny. With that mindset, he gave the writing staff the freedom to do whatever they wanted on those early episodes. That attitude is arguably the reason the show was such a huge hit among both old and young audiences. Unfortunately, Matt Groening was insulted by that attitude and interpreted it as Simon being uncommitted to the show. As the show became a sensation, Simon resented Groening's new-found fame and glory, which he thought should have been his own. Tensions reached a boiling point in 1993, when after four seasons of contention and bitterness, Simon offered to leave the show.

When Sam offered to leave the show, he didn't exactly walk away empty handed. He shrewdly negotiated a deal that would allow him to retain his backend points on the show's syndication and home video sales as well as his executive producer credit. Keep in mind that in 1993, home video was basically a non-existent market, so Sam would have been forgiven had he relinquished that seemingly worthless deal point. Fast forward twenty years, and we all know that The Simpsons is one of the most popular and successful syndication, DVD and VHS properties in the history of Hollywood. As of May 2013, The Simpsons has sold over 25 million DVDs, generating over a billion dollars in revenue. Syndication of The Simpsons has brought in another billion dollars, with another billion anticipated in the future. The Simpsons generated $5.5 billion worth of advertising revenue for the Fox Broadcasting Company alone.

To this day, twenty years after leaving the show, Sam Simon is still credited on every episode of The Simpsons as executive producer. So how does that impact Mr. Simon's bank account? When you combine back end syndication, home video/DVD sales and his executive producer credit, Sam earns an estimated $20-30 million every year off The Simpsons. That's $20-30 million per year off a show he hasn't worked on since 1993. In total, Sam Simon has earned hundreds of millions of dollars off The Simpsons royalties. And ironically, he admitted in a recent interview with Marc Maron that he hasn't even watched the show in years.

After retiring in 1993 at the ripe old age of 38, no one would have blamed Sam if he spent the next twenty years banging Playboy Playmates and partying all over the world. Actually, he did end up banging and marrying a Playmate named Jami Ferrell, but their union lasted a scant three weeks. His other marriage was to the lovely actress Jennifer Tilly from 1984-1991. Sam and Jennifer are still close friends. Sam is currently engaged to a chef named Jenna Stewart.

Sam did actually end up traveling the all over the world, but it wasn't just to party. Over the last 20 years, Sam has become one of the most altruistic and generous supporters of many philanthropic causes, especially ones relating to animals. He has donated so much money to PETA that they named their world headquarters after him. He has donated so much money to the anti-whaling organization Sea Shepherd, that they named their flagship boat the "SS Sam Simon": 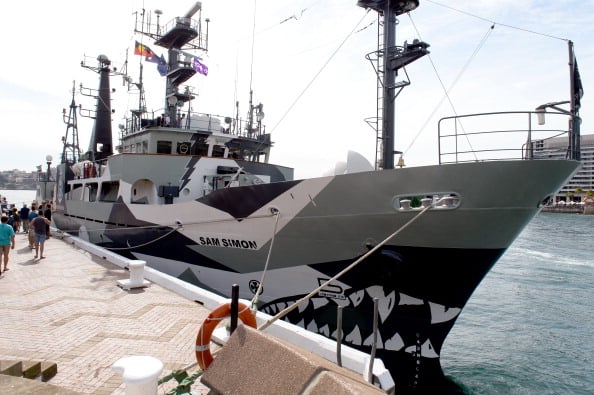 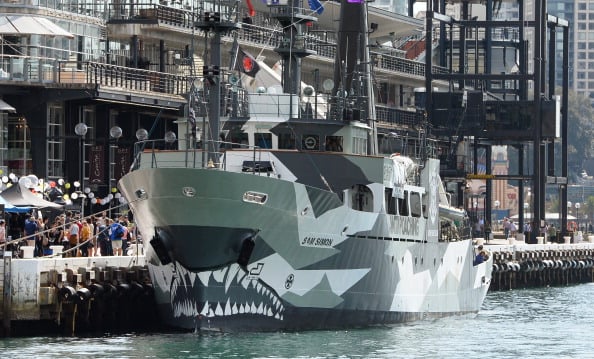 Through his personal charity, The Sam Simon Foundation, he feeds over 200 hungry families in Los Angeles two vegan meals a day, every single day, 365 days a year! The foundation also runs a six acre luxury dog rescue in Malibu. As if all that wasn't enough, after being diagnosed with terminal colon cancer late in 2012, Simon heroically spent the next 2+ years donating his entire net worth to charity. When asked about what will happen to his fortune after his passing on a Marc Maron podcast, Simon, who has no children, explained:

"I've given most of it away… I wont be rich until we get [my next] quarterly installment from The Simpsons!"

At another point in the podcast, Sam encourages everyone to do their part to help the environment and animals. Even if that just means doing a "meatless Monday," every little bit helps. We truly admire Sam for all of his accomplishments. The world needs more people like Sam. Rest in peace friend! You will be missed.