Ryan Seacrest Will be a Billionaire Thanks to Dick Clark

One year ago today, TV and radio legend Dick Clark passed away at the age of 82. The perpetually youthful Clark dominated television and radio airwaves for nearly 60 years. But Clark was much more than just a media talking head. He was a radio DJ, a television producer, restaurant mogul, entrepreneur and much more. This entrepreneurial spirit made Dick Clark a millionaire before he was 30 and gave him a net worth of $200 million at the time of his death. And while a $200 million net worth is certainly impressive, it pales in comparison to what Ryan Seacrest should be able to accomplish in his lifetime if he continues to follow in Clark's footsteps. Let's put it this way: If Ryan Seacrest lives to the age of 82, and follows four simple lessons from Dick Clark's life, he will most likely die a billionaire! Keep reading to find out what those four lessons are, maybe you can follow them to riches yourself!

Lesson #1: You Must Own What You Do

Today Ryan Seacrest earns over $60 million a year and has a net worth of $125 million. Of that $60 million, "only" $15 million comes from hosting American Idol. As Dick Clark learned, the real money isn't in merely being a DJ or TV host. In order to make the big Hollywood dollars you need to OWN the radio or television program. Dick Clark didn't own American Bandstand. But he did own Dick Clark Productions which since being founded in 1957 produced hundreds of television shows including The Golden Globes, The Country Music Awards and TV's Bloopers & Practical Jokes. In 2007, Dick Clark Productions was sold to Redskins owner Dan Snyder for $175 million. Ryan Seacrest took this lesson to heart when he formed Ryan Seacrest Productions (RSP). The other $45 million he makes each year comes from Ryan Seacrest Productions. Through RSP, Ryan is the creator and Executive Producer of all the Kardashian reality shows as well as Bravo's new hit Shahs of Sunset.

Without a doubt, much of Dick Clark's success can be attributed to his eternally youthful appearance and this quality will be important to Ryan Seacrest's career as well. But perhaps more important than physical appearance is maintaining controversy free life. Dick Clark was married three times but his final marriage lasted over 35 years and he was never in the news for any scandals or arrests. This squeaky clean persona is important if you want to stay in America's good graces and so far Ryan has walked that line well. 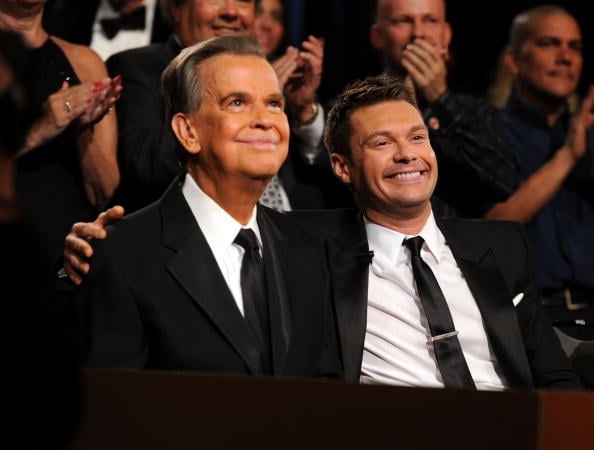 As we mentioned earlier, Dick Clark wasnt just a television host. He was a DJ, a producer, restauranteur, talent manager, record executive… If you want to make a fortune, it helps to have a bunch of jobs and Ryan Seacrest is following this lesson well. Seacrest is often considered the hardest working person in show business. He hosts a daily radio show that is nationally syndicated, he hosts all of E!'s red carpet events, he has hosted awards shows, he executive produces many televisions shows and of course he is the host of American Idol. I would love to know how many 1099's Ryan gives his accountant each year!

Perhaps the most important lesson we can all learn from Dick Clark is NEVER STOP DOING WHAT YOU LOVE! Clark worked in the entertainment industry for over 60 years and built an empire that will be around for decades to come. Even into his 80s, Dick was running his business and appearing at New Years Rockin Eve. Ryan Seacrest is 37 today and worth $125 million. If he continues at this pace for 45 more years (until his 82nd birthday) in theory he will earn an additional $2.7 billion! After taxes, fees, managers, lawyers, agents, living expenses etc… Ryan Seacrest should comfortably die a BILLIONAIRE!

So what do you think of Dick Clark's life lessons? Will you follow them to become a billionaire yourself? Let us know in the comments below!