Through his first three seasons in the NFL, Russell Wilson has been one of the biggest bargains in the league. This is a guy who has made three trips to the playoffs in those first three seasons. And of those three playoff runs, two resulted in Super Bowl appearances with one victory and one agonizing defeat (that you may recall from last month). So you gotta assume that Russell has been making huge money from the Seahawks, right? He's probably making tens of millions per year in salary alone… right? Wrong. As a rookie, Russell has made just over $526,000 per year in those three seasons. He's set to make a little under $800,000 this upcoming season. Crazy, right? But this is all about to change…

Now that Russell has been in the league for three years, he can finally re-negotiate his rookie contract. For their part, the Seahawks have two objectives: #1) They have an eye towards the future and are very interested in locking down as many of their star players as possible, first priority is Russell Wilson. #2) In order to make #1 happen, the Hawks need to be very sensitive to the salary cap limitations. They might need to get a little creative here and there. With those objectives in mind, the Seahawks are reportedly about to offer Wilson something that has previously been unheard of in the NFL: A 100% guaranteed contract. 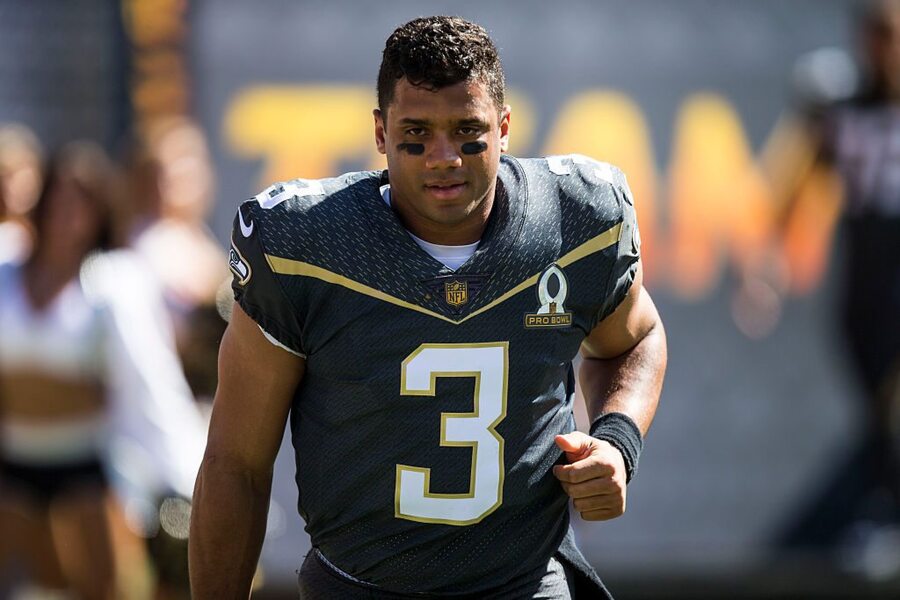 To be fair, rookie contracts of high draft picks are often guaranteed (a la Andrew Luck with the Colts). But as far as deals with established players go, this would be EXTREMELY unusual. Pretty much unprecedented.

While a player's entire contract counts against the salary cap in the NFL, owners can save themselves a little bit of money by making some chunks of a player's deal non-guaranteed. If the player is waived for whatever reason during the contract, some of that money is recouped by the team. Similarly, oft-injured players may have clauses in their contract stating that money won't be earned unless they appear in a certain number of games.

In theory, this would benefit both sides. The Seahawks could offer Wilson a large amount of guaranteed money, but the overall size of the contract would be reduced–something like $80 million over four years. That would allow them to spend money on other players, including running back Marshawn Lynch, who may end up retiring before the season starts anyway.

For his part, Wilson would be getting a sizable chunk of money that will be 100% guaranteed. If he went with a traditional, mostly non-guaranteed contract, he would reportedly be looking at a $120 million deal. So yeah, he might potentially be leaving some money on the table down the line, but now he is 100% insured against injury or a drop in performance.

Compare his situation with Jay Cutler, who signed a seven-year, $126 million contract with the Bears before last season. That's an enormous cap hit on the team, but only $54 million of Cutler's salary is guaranteed. Do you really think he'll still be in Chicago by the time 2021 rolls around? If not, Cutler is not going to be as happy as Russell a few years from now if the same situation unfolds.

The one caveat for the Seahawks is that they're banking on Wilson staying healthy. Other "running" quarterbacks have gotten themselves injured thanks to a reckless style of play, most notably Robert Griffin III and Michael Vick. But Wilson has always played his position a bit more carefully. He doesn't take unnecessary hits, and often uses his legs to keep plays alive, rather than immediately running into danger.

If you were in Wilson's shoes, what would you do? Besides taking back that late-game interception from the Super Bowl, of course. Would you grab a pretty hefty salary knowing it was all yours, or hold out for even more money while risking the possibility of not getting all of it?