How Rich Was Hitler and Who Gets His Mein Kampf Royalties Today?

By Brian Warner on January 9, 2014 in Articles › Celebrity News

How Rich Was Hitler and is someone getting rich off his royalties today? Many people don't realize that aside from being one of the most evil people in history, Adolf Hitler was also one of the richest authors of all time. The first royalties from Hitler's bestselling book, Mein Kampf, funded the early Nazi party's rise to power and helped Hitler secure his future power with bribes and gifts given to prominent German political figures. Mein Kampf would go on to sell over 10 million copies worldwide. The royalties gave Hitler a vast personal fortune which he used to fund a lavish lifestyle that included a fleet of Mercedes and several luxurious mansions across his empire. Furthermore, Hitler made millions licensing his image to his own government for the use on things like stamps and political posters. It should be noted that in addition to his personal wealth, Hitler and the Nazis also had access to vast amounts of stolen property, precious metals, and priceless works of art but for this article we are going to focus on how much Hitler made personally, from legal endeavors, during his lifetime. And finally who is cashing his royalty checks today?

Interestingly, the question of Hitler's Mein Kampf royalties has never been more relevant today than ever before thanks to the advent of e-readers like the Amazon Kindle and Apple iPad. Believe it or not, Mein Kampf has even become an ebook best seller. As of January 8, 2014, a $1 electronic version of the book produced by a Brazilian publishing company is #1 on Amazon's Propaganda & Spin chart. That might be slightly understandable considering the category, but the book is also number two in Amazon's Political Science category. Many media outlets are comparing the book's electronic popularity to a similarly smutty work, Fifty Shades of Grey. Because many people were embarrassed to be seen reading Fifty Shades and its two sequels in public, ebook sales for the the S&M novels were exceptionally high. The same argument can easily be made about Hitler's book. Who would want to be seen at an airport, or a coffee shop or at the dentist office holding a copy of Mein Kampf in front of your nose? With an ebook, no one's the wiser. So who is benefiting today from this surge in ebook popularity? And what about hardcover sales that are still surprisingly strong in a few parts of the world? 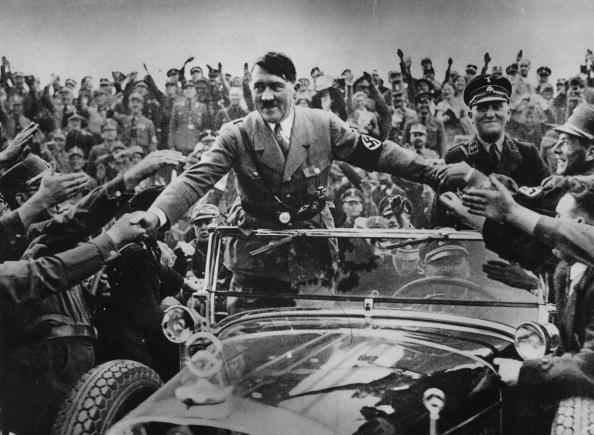 Why Did Hitler Write Mein Kampf?

Hitler wrote Mein Kamp in 1923 while serving a five year sentence in Landsberg Prison after his failed Beer Hall Putsch. He dictated the book to two cell mates Rudolph Hess and Emil Maurice over roughly a year and a half. The idea for writing a book was initially conceived as a way for Hitler to pay down the rather large debt he accumulated as part of his legal defense. He had low expectations for the book, hoping that it would be popular among fellow National Socialist Party members.

In its first year of publication, 1925, Mein Kampf sold a modest 9,000 copies and earned Hitler no royalties at all. As Hitler's political profile began to rise, so did his books sales. In 1930 he sold 55,000 copies. In 1933, the year Hitler became Chancellor of Germany, sales exploded to over 850,000 copies. Once he was in power, the German government purchased and distributed 6 million copies of Mein Kampf to soldiers, and average citizens alike. Every married couple in Germany was given a "free" copy of the book on their wedding day. At his peak, Hitler was earning over $1 million a year from Mein Kampf royalties. That's the equivalent of $12 million a year in 2012 US dollars. 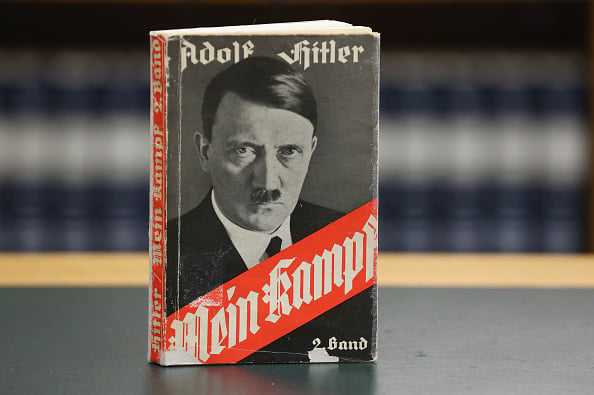 In total, Mein Kampf sold over 10 million copies by the time he committed suicide in 1945. The book sales earned Hitler $7.8 million reichsmarks, which is equal to $152 million inflation adjusted, 2012 US dollars. Hitler used his fortune to fund a lavish lifestyle. Hitler earned enough money from his royalties to accumulate a $10 million tax bill which he promptly forgave the day he became Chancellor. While still poor and imprisoned, Hitler once wrote to a Mercedes Benz dealer in Munich, asking for a loan on future royalties so he could buy the Mercedes 11/40 model that was his dream car. The dealer declined, but soon Hitler would own a fleet of Mercedes. He also used his new found wealth to purchase several lavish homes including one that became the main headquarters of the Nazi party, the Berghof. Hitler invested millions of his own dollars into purchasing and renovating the Berghof property from what was once a small chalet into what we would today consider a massive luxurious estate complete with libraries, screening rooms, pools, tennis courts, multiple car garages and much more. 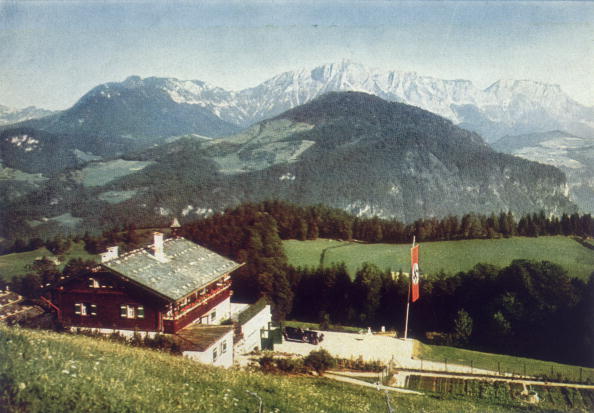 Hitler also earned royalties from international book sales up until 1939 when he was declared an enemy by the allied nations. The amounts were modest. For example, between 1933 and 1938 Hitler's UK royalties amounted to roughly $500,000 inflation adjusted dollars. His American royalty check for the same years was just $49,000. And those amounts do not include the 20% commission his literary agent Curtis Brown took. In 1939, the United States seized control of Hitler's US publishing royalties by invoking the Trading with Enemy Act. By the end of the war, the United States had seized $255,000 worth of Hitler's royalties and distributed them to war refugee charities.

When Hitler committed suicide in 1945, his nephew Leo Raubal (his half sister's child) had a very legitimate claim to the royalties, which could have been worth millions of dollars, but Leo adamantly refused to have anything to do with Mein Kampf's profits. Therefore Mein Kampf became property of the state of Bavaria, Hitler's place of residence. Bavaria has outlawed publishing of Mein Kampf in Germany since the war ended, however under German copyright law the book becomes public domain on April 30th 2015, 70 years after the author's death. At that time, anyone with a printing press can sell the book within Germany and not pay a single royalty.

After the war, the American publishing company Houghton Mifflin purchased the U.S. rights to Mein Kampf from the government's Office of Alien Property for $37,000. Houghton Mifflin would go on to earn $700,000 in royalties over the next 20 years which they ended up donating to charity amid wide public outcry and protest.

The royalty situation in other countries varied. In the U.K., Mein Kampf was banned from being published from 1945 – 1969, after which all collected royalties were donated to anonymous charities. It turned out to be difficult to find a charity that would accept the royalties since most considered the funds to be blood money. Mein Kampf was unrestricted in other countries and has recently gone on to become a best seller in countries like Sweden, India and Turkey. Those royalties are begrudgingly accepted by the state of Bavaria, then distributed to charity.

Other Sources of Hitler Income:

Hitler earned additional tens of millions of dollars licensing his image to the state for a variety of political purposes. During his reign, Hitler allowed his image to be used on German stamps and posters that pushed the Nazi propaganda machine. He did not, however, hand over his image for free. While technically German photographer Heinrich Hoffmann owned the rights to Hitler's official state portraits, most historians agree that Hoffman was likely a puppet to true beneficiary, the Fuhrer himself. As with his Mein Kampf rights, the rights to his image are now controlled by the state of Bavaria and any profits earned are distributed to charity. 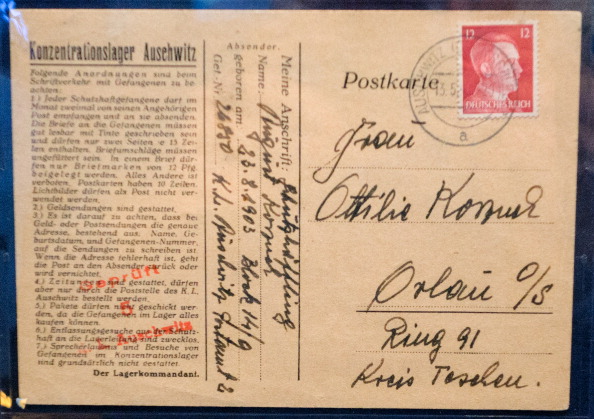 During his time as an artist in Vienna, Hitler produced hundreds of paintings. Many of these were seized by The US government after WWII and will never see the light of day. Periodically however, a few of his paintings will come up for auction and fetch tens of thousands of dollars for a private seller. As with his book royalties, Hitler's distant heirs would have a legitimate claim to those profits but so far all have refused. 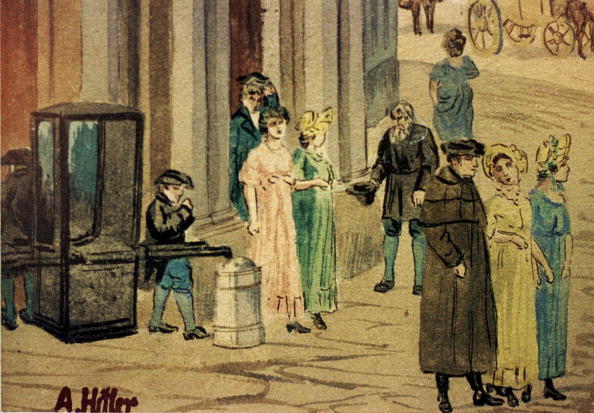 History should remember that Hitler's rise to power would not have been possible without those early Mein Kampf publishing royalties. As his power grew, so did book sales and royalties which made Hitler extremely wealthy. The money funded a lavish lifestyle, and allowed Hitler to consolidate and progress his evil goals. The book is still semi-popular today in various parts of the world BUT in an ironic twist of fate, when someone buys the book today they are most likely benefiting a charitable cause that they may otherwise detest.