After Retiring From The NBA, Desmond Mason Has Become An All-Star…In The Art World???

What do actor George Clooney, sportscaster Joe Buck, former NBA Commissioner David Stern, and Starbucks CEO Howard Schultz all have in common? Each has a piece of artwork commissioned by Desmond Mason, a retired NBA player who has parlayed an art background into a successful post-basketball career.

Desmond Mason attended Oklahoma State University, where he majored in studio art. After the Seattle Supersonics drafted him with the 17th pick in the 2000 NBA Draft, Mason quickly gained some notoriety within the league. He became the first Seattle player to win a dunk contest after taking home the 2001 Slam Dunk trophy. That same year, he was called into Commissioner Stern's office.

No, Mason wasn't in trouble for wearing the wrong suit. Stern wanted to purchase one of Mason's drawings–Al Pacino in "Carlito's Way." Stern offered a modest $500 sum for the drawing, which Mason now admits he would have happily given to the commissioner for free. But the groundwork was there, and soon Mason found himself making paintings and drawings for celebrities all over the world. 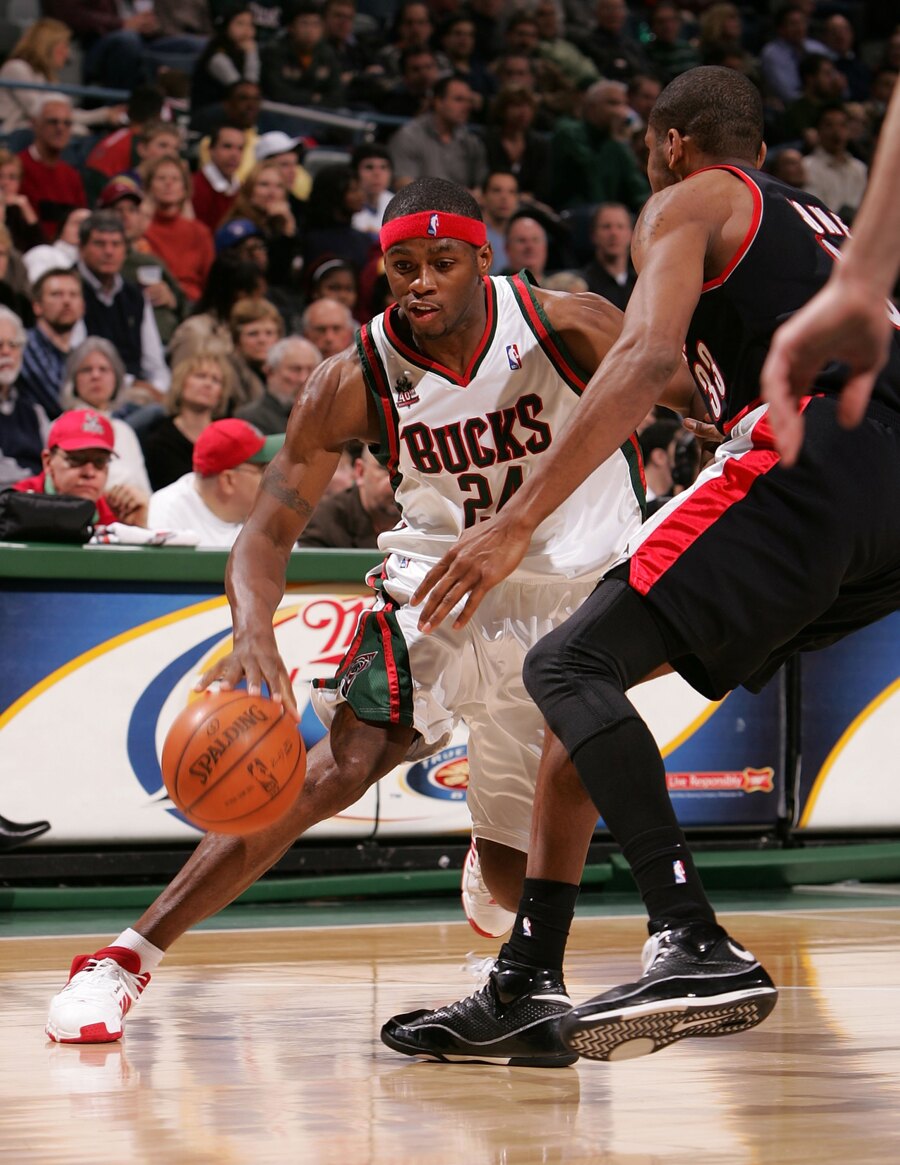 Mason knew art was something he could do for a living in 2002, after his work was featured at a showing in a Seattle art gallery, while he was still with the Sonics. Even critics from other cities praised his work, and he continued to bring his portfolio with him as he made stops around the league, including in Milwaukee, New Orleans, Oklahoma City, and Sacramento. His work has been featured at Art Basel in Miami, and just recently was displayed in New York at the Athletes for Art Renaissance Convention.

After seeing the biopic "Pollock," about American abstract painter Jackson Pollock, Mason shifted his focus from realism to abstract expressionism. When he bought a home in 2006 in Cabo San Lucas, Mexico, he got some advice from a neighbor, who just happened to be Alex Rodriguez. Rodriguez suggested Mason should display his art at Art Basel Miami, and the small forward credits A-Rod with helping him improve his art game.

Who are some of Mason's other neighbors in Cabo San Lucas? George Clooney, nightlife guru Rande Gerber, and mogul Mike Meldman. The trio launched Casamigos tequila in 2013, and Mason, along with artist friend Paul Snyder, created a 30 by 40-inch piece that took about 25 hours to create. Mason made the colorful background, while Snyder painted part of the bottle. Meldman has the original, and Clooney and Gerber each have a copy. Combined, the three pieces of art are valued at $15,000.

After 10 years in the league, during which time he earned $37 million in salary before taxes, Mason hung up his sneakers in 2009. Now, he spends most of his time in his Oklahoma City studio, painting everything from canvasses to handbags.

Mason has also commissioned some work for big names in the sports world. Joe Buck bought a piece for $8,500 that featured a myriad of colors mixed in with questions like "Who can tell me I'm wrong?" and "Who am I really?"

In 2002, Mason criticized Starbucks CEO–and Supersonics owner–Howard Schultz, or rather, he criticized his company's pastries, saying they weren't very good. While their relationship hit a bump when Schultz traded Mason to Milwaukee, the pair has since reconciled, and last year Schultz purchased a 60 by 80-inch painting of a face, done in oil, acrylic, and latex paint for $14,000.

In 2012, Mason put four, 40 by 40-inch canvasses side by side and painted them as one piece–the final result resembled a stream of confetti on a white background. Then, Mason broke up the work into four pieces, one of which was snagged by Hank Haney for $10,000. Haney previously coached Tiger Woods and Mark O'Meara. Maybe his art purchase will be the catalyst for Woods to get back on his game.

Mason initially pursued art as an escape from the drugs and violence he encountered growing up outside of Dallas. He took a ceramics class in school, and used the brown paper bags given to students to protect textbooks as canvasses to practice his work. Once a creative, high-flying dunker, Mason is now practicing a different kind of art, and he's getting the same "oohs" and "aahs" he heard on the court.