Remember When MIA Flipped Off The Camera During The Super Bowl Halftime Show? Ya, That Might Cost Her $16.6 Million

From the "Are you f*&%^ kidding me" files… Earlier this week, The NFL demanded that singer M.I.A. (real name Maya Arulpragasam) pay them an additional $15.1 million in restitution from for her shenanigans during the 2012 Super Bowl halftime show. She was already levied a $1.5 million fine from the NFL back in September. For those who may not recall, M.I.A. briefly raised her middle finger and swore on camera during her performance with Madonna and Nicki Minaj. Not surprisingly, the NFL lost their minds.

In March 2012, the NFL filed a complaint against M.I.A. with the American Arbitration Association. The NFL filed this complaint despite the fact that both NBC (which broadcast the game) and the FCC (which oversees public safety for all broadcast media) stated that neither would take any further action against the singer. That should have been the end of it but then last September, the NFL demanded that M.I.A. pay a $1.5 million fine for breaching her contract when flipped the bird and mouthed "I don't give a shit" while performing during halftime. The NFL found this to be, and I quote, "in flagrant disregard of the values that form the cornerstone of the NFL brand and the Super Bowl."

The fact that the NFL can say the words "values" and "cornerstone" with a straight face is laughable. But it get even bat shit crazier, folks. The NFL and their accountants tallied up how much advertisers would have paid for ads during the two minutes and 10 seconds that M.I.A. performed and arrived at that $15.1 million dollar figure. This means the NFL is seeking a total of $16.6 million from singer, who, by the way, was not paid for the performance, as is the NFL custom. And keep in mind that those two minutes and 10 seconds were slated for performance and not commercials, so you have to wonder what the NFL is up to with this fine.

As you can imagine, M.I.A. isn't rushing to break out her checkbook. Rumors had been circulating for six months that she was staging a secret legal war with the NFL. Well, the Hollywood Reporter has obtained the legal response papers that M.I.A.'s lawyers have filed and they state:

"The continued pursuit of this proceeding is transparently an exercise by NFL intended solely to bully and make an example of [M.I.A.] for daring to challenge NFL. Such aggressive posturing toward [M.I.A.] stands in marked contrast to how NFL looks the other way and does nothing to sanction its players, the coaching staff of its member teams, and even its team owners for engaging in precisely the sort of conduct it accuses Maya of here ("flipping the bird"), or even dramatically worse conduct."

In essence, M.I.A.'s legal team is arguing that the NFL's assertion that the league has a wholesome reputation is false. Forget the behavior of the players– which is often profane and lewd, plenty of half time performers have been both lewd and lascivious. Janet Jackson was fined $550,000 for an errant nip-slip in 2004 that has come to be known as Nipplegate. Michael Jackson repeatedly grabbed his crotch. Bruce Springsteen crotch slammed a camera. Prince sexually stroked his guitar neck. 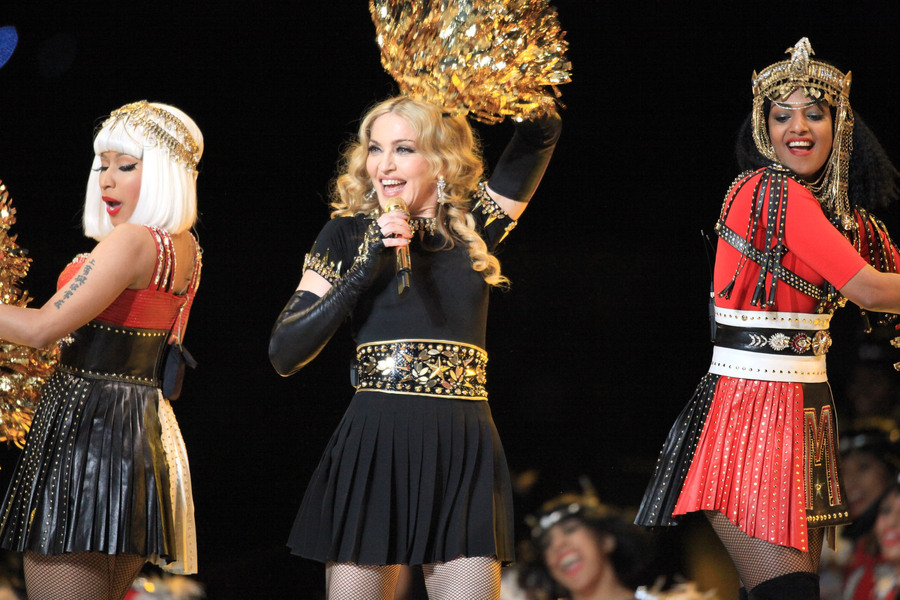 The response papers go on to point out that on many occasions NFL players, coaches, and owners have been seen flipping someone off and uttering profanities during games that are broadcast on television. They are very rarely fined for it. M.I.A.'s legal team has made it clear that they feel the NFL is bullying the singer and they have accused the league of making an example of her for daring to have the balls to challenge the NFL.

Look, swearing and racist based profanities are so pervasive in the NFL that they actually considered imposing a 15-yard penalty against players who say the "N-word" on the field. Let's do the math on that, shall we? That's about one yard for every ONE MILLION DOLLARS M.I.A. has been asked to pay. That is patently ridiculous.

For what it's worth, in regards to the halftime performance with the now $16.6 million fine attached to it, the FCC only received 222 complaints over the broadcast that had 111.3 million viewers. Not all of the calls were about M.I.A., some of those complaints were about commercials. M.I.A.'s brief middle finger and mouthed swear word (that every six-year old knows) didn't cost the NFL one red cent, let alone $16.6 million dollars.

It seems that, at this point, if M.I.A. wants to give anyone the middle finger, it ought to be the NFL. If the courts have any sense, they will throw this case out.