By Joseph Gibson on August 27, 2016 in Articles › Celebrity News

If you were touring garage and yard sales in McKinney, Texas in the past few months, you may want to sit this story out. 12-year-old Rasheemah Bartley was doing just that when she found a bunch of black-and-white sketches that she wanted to use as coloring books. Her mom passed her two bucks and the "coloring books" were hers, and it only took a cursory examination by the girl's stepfather to determine that these were no typical coloring books, but instead potentially valuable (and trademarked) comic book art. Even he had no idea what Rasheemah had actually brought home, though: Extremely rare original comic art work, some of it by Jack Kirby, universally recognized as The King of Comics.

The Bartley household was then faced with a classic "good news, bad news" scenario – the good news was Rasheemah's $2 buy was valued at $48,000, while the bad news was that all of the work that somehow ended up at this garage sale are listed in a database as having been reported missing from the Dallas/Fort Worth Airport a couple of months back. The work itself includes various pieces of original art from EC Comics and Warren Publishing, famous for their horror work in the 50s and 70s, respectively, but the highlight of the garage sale haul is unarguably the original artwork for the first page of the first issue of Marvel's The Avengers, drawn by Jack Kirby and Dick Ayers.

The value of any Kirby artwork has skyrocketed in recent years, even on obscure titles the general public has never heard of, so it's no surprise that his artwork for a now-iconic title like The Avengers would be worth a pretty penny on the collectors' market. But for now, the art is in official custody while a Dallas judge decides who it actually belongs to. Hopefully, Rasheemah will get a decent finder's fee for buying the artwork, and for not ruining it with crayons. 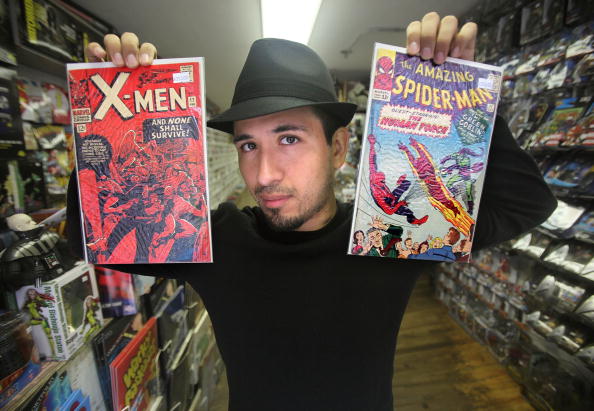 Mario Tama/Getty Images
Did we make a mistake?
Submit a correction suggestion and help us fix it!
Submit a Correction