By Brian Warner on December 2, 2016 in Articles › Celebrity News

Howard Schultz, the self-made multi-billionaire 63 year old CEO of Starbucks, announced today that he is stepping down to focus the rest of his life on philanthropy and solving social causes. It will be the first time Starbucks has been run by someone other than Schultz in 16 years. Schultz will remain Chairman of the Board.

Howard Schultz is one of the most impressive rags to riches stories we've ever covered on CelebrityNetWorth. He was literally raised DIRT POOR in a New York City housing project. In order to distract himself from the poverty at home, Howard escaped through sports. He played high school baseball, football, and basketball. He was eventually awarded a football scholarship to Northern Michigan University—his ticket out of his impoverished childhood. He was the first person in his family to go to college.

After graduation, Schultz spent four years working at Xerox before moving on to a job at a Swedish manufacturer of drip coffeemakers. He eventually became manager of U.S. operations for the company and this is how he ended up at the Pike Place Market Starbucks in 1981. Starbucks at the time was one of his best customers.

On that fateful day, Schultz was drawn into conversation with these connoisseurs of coffee who, rather than roasting the easiest bean, sought out the very best tasting, best smelling, highest quality coffee they could find. But it was more than just that passion for the best coffee that struck Schultz, it was also how the Starbucks proprietors wanted to share this passion for coffee with others.

Schultz saw a massive opportunity and immediately knew he had to get a job at Starbucks. It took him a year to convince Starbucks to hire him. In 1982, he left New York and moved to Seattle to become Starbucks' Director of Operations and Marketing. At the time, Starbucks had four stores and Schultz was 29 years old. 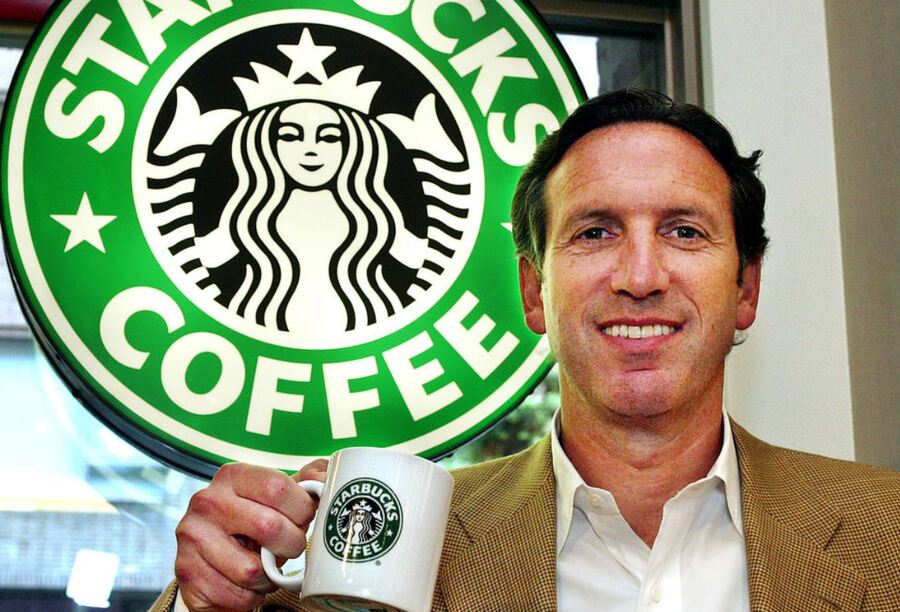 In 1983, Howard took a trip to Italy and was taken in by the romance of the Italian cafe culture. These little romantic cafes existed on every block. They were the meeting place where everyone could have a conversation or read the paper. These Italian coffeehouses were an integral part of their patrons' days. Howard thought he could bring that Italian coffeehouse tradition back to Seattle, turning a coffee bar into an integral stop in a person's day. His instinct was clearly spot on.

However, in order to make his dream a reality, he had to leave Starbucks, which at the time was solely a purveyor of coffee beans. The owners at the time did not envision turning Starbucks into a "restaurant".

Schultz started his own coffee company called Il Giornale. He would not be gone from Starbucks for long, however. He came back in 1987 to buy the company (with the help of local investors including flutist Kenny G whose parents were friends with Howard!) for $3.8 million. That's roughly $7 million dollars after adjusting for inflation.

Under Howard's leadership, Starbucks expanded rapidly in the 1990s. The shops seemed to multiply like rabbits overnight on every corner. Schultz modeled Starbucks' domination on McDonald's, with one huge difference—every McDonald's location is franchised, while Starbucks owns most of its stores.

Today the company has a market cap of $80 billion and Howard is personally worth $3.1 billion. Not a bad outcome for a kid from the projects!