By Joseph Gibson on June 2, 2017 in Articles › Celebrity News

One of the private jets owned by Elvis Presley (along with his dad) went up for auction recently, courtesy of LiveAuctioneers. The 1962 Lockheed Jetstar is something of an important piece even in the already rarefied category of private jets owned by Elvis, since for more than 35 years it has belonged to a private owner, and is the last jet to have once been Elvis' that is still owned privately. And following the end of the auction on May 27th, it's found a new owner for the winning bid of $430,000.

The buyer's identity – and what this unnamed person plans to do with Elvis' jet, has not yet been disclosed. But for the last 35 years, the jet was a tourist attraction in Roswell, New Mexico, and since its engines have long been removed it will have to be taken apart and shipped to wherever the new owner wants it. 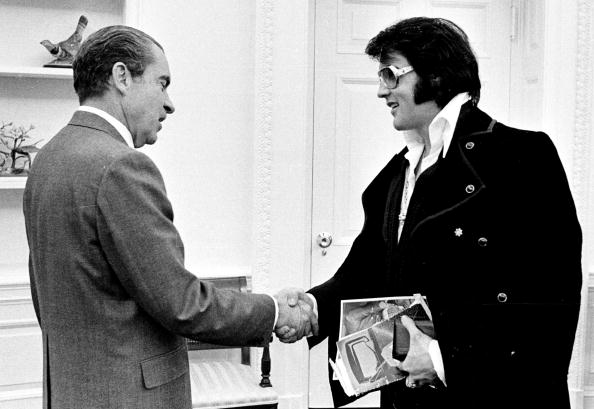 Cosmetically, the jet hasn't been touched since it belonged to the King of Rock and Roll, with all the aesthetic elements it had when it was custom designed for Elvis himself. These include seats upholstered in red velvet, red carpeting, and gold-tone hardware. Of course, that lack of touch also means the jet hasn't been restored, so if it weren't Elvis' old private jet it would probably be described as a "fixer upper."

The plane's less than pristine condition might be why it went for just $430,000. That might sound like a lot for a beat-up jet that's more than 50 years old, but as a piece of Gracelandia it was estimated by LiveAuctioneers to be worth $2 million and $3.5 million, which means whoever got it did so got a pretty good bargain in the process. That will prove especially true if, as the auctioneer claims, the jet goes on to "earn its new owner millions of dollars in exhibit, or entry fees as an attraction."