Nothing makes a long commute or a lonely lunch go by faster than popping some earbuds and firing up an episode of your favorite podcast. My top three favorite podcasts at the moment are: #1) "How Did This Get Made?" with Paul Scheer, June Diane Raphael and Jason Mantzoukas. They tell you a bad movie to watch one week in advance, then spend an hour making fun of said movie. It is glorious. I'm driving from San Francisco to Los Angeles tomorrow and will spend part of that drive listening to the Color Of Night episode. episode#2) WTF with Marc Maron. Marc is probably the best interviewer on the planet. He can conduct a fascinating discussion with anyone on any topic. I Highly recommend his Dave Grohl interview if you're looking for a place to start. And #3) NPR's Planet Money. Fun, topical short stories about the economy and money in general.

There are literally thousands of podcasts to choose from on any topic you could possibly imagine. Most of them are not great and probably will never be heard at all. On the other hand, a select few podcasts are extremely popular. Popular enough that they have turned into full time, extremely lucrative paying careers for the hosts. So, exactly how much money do the top podcasts make??? 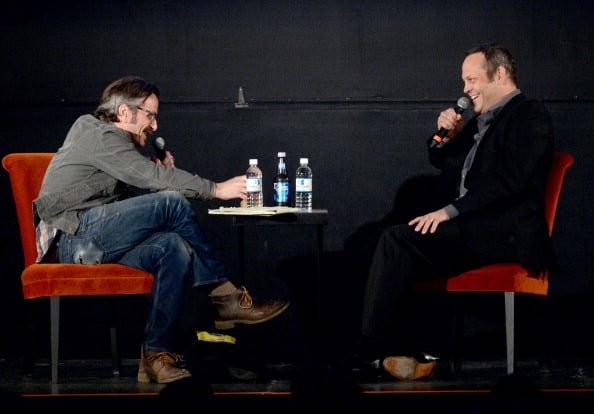 A couple things to note before you look at the list below. First off, out of the top 20 most popular podcasts on iTunes right now, only three are actually ad supported. The rest are either supported by listener donations or completely free. Secondly, it should also be noted that, as with all forms of media-buying, an advertiser can get a big discount from buying in advance and in bulk. So these numbers may go up and down depending on the particular deal. And finally, how'd we get the revenue numbers? Good question. It turns out that a bunch of the podcasters below have actually spoken publicly about how much money they are making. In the cases where the info wasn't spoon fed to us, we were also lucky enough to have access to an insider in the media sales industry. This anonymous insider helped fill in the gaps when needed. And finally, we also want to point out that the numbers below are gross revenue, not profits. Some of the casters below are clearly spending some money on things like editing, studio rentals, co-hosts… etc.  But enough delaying, below are the highest earning podcasts in the world…

These YouTube stars are everywhere! I've never actually even heard of this podcast. Every other week, Shane Dawson jokes around with his friends about all things funny going on in the world. Never heard of him? Shane has 6 million YouTube subscribers and over 1 billion video views. He is also one of the highest earnings YouTube stars in the world, pulling in $1 million or more every year from his channel alone.

This Week in Tech, more commonly referred to as "TWIT", is by far and away the highest earning podcast in the world bringing in an estimated $50,000 per episode (as the name implies, it's a weekly show). As if that wasn't impressive enough, in 2013 alone the TWIT.tv network grossed $8 million dollars across all the various shows, platforms and live events. Hosted by tech enthusiast Leo Laporte, TWIT discusses current events in the technology and consumer electronic worlds. Leo frequently welcomes high profile tech guests including Apple's Steve Wozniak, John Hodgman, Kevin Rose and more.