Former number-one pick Sam Bradford was recently traded to the Eagles from the Rams. While in St. Louis, he won just 18 games over five years, and was constantly standing on the sideline with a clipboard, the victim of numerous injuries.

But don't feel too bad for him. In fact, it was an injury in college that's helped Sam make $65.1 million in his career thus far, a sum that will reach $78 million by the time his rookie contract is over. How did he pull this off???

When he was at Oklahoma, Bradford suffered a shoulder injury during the third game of his junior year. He opted to have surgery, meaning he'd miss the rest of the season. Before he even had that surgery, though, he declared for the 2010 NFL Draft. 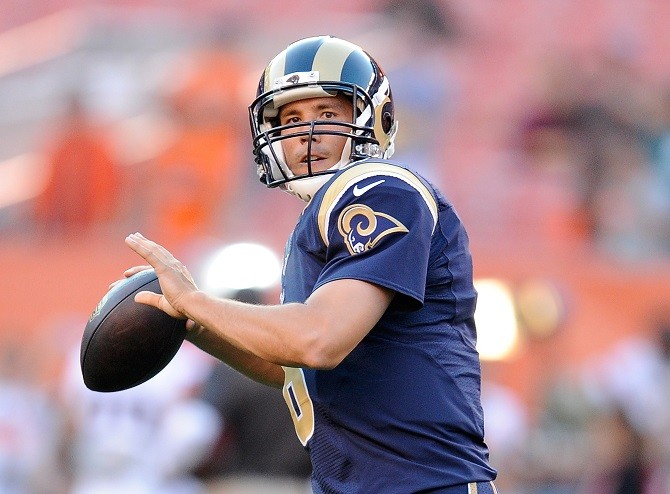 Sure, he was injured, but this was an incredibly smart move. Sam Bradford may not be a household name among quarterbacks today, but you have to compare him to the quarterbacks in his draft class. In his draft class, Sam was absolute royalty. Look at this list: Tim Tebow, Jimmy Clausen, Colt McCoy, Mike Kafka, John Skelton, Jonathan Crompton, Rusty Smith, Dan LeFevour, and Tony Pike. Those were the next nine quarterbacks selected after Bradford. Not exactly striking fear into anyone's hearts–though to be fair, Tim Tebow actually has won a playoff game.

Had Bradford stayed another year, he would have competed for draft position with guys like Cam Newton, Colin Kaepernick, Blaine Gabbert, Jake Locker and Christian Ponder. Outside of Locker, who just retired this offseason, all of these guys are still in the league.

Assessing his competition was one great decision by Bradford. The other was declaring for the draft in the final year before the CBA put limits on rookie contracts.

Bradford's first deal in the NFL was for $78 million over six years, with $50 million guaranteed. His contract year was also a time when unusually generous deals were being thrown at players. By the time 2011 rolled around, most of the enormous deals had dried up. Newton, the #1 pick of that year's draft, signed a modest four-year, $22 million deal. And Gabbert, who was chosen 10th by the Jacksonville Jaguars (and where Bradford may have gone had he stayed another year in college), signed a four-year contract for just $12 million.

Of course, Bradford would probably like to have a few more wins in his pocket, too. Still, it's got to feel pretty good to earn such a large sum of money thanks to a few shrewd personal decisions. And who knows? Maybe Bradford will finally find NFL success in his new situation under Chip Kelly. Stranger things have happened.