How Was O.J. Simpson Able To Afford His Famous Legal "Dream Team" During His Murder Trial?

The new ESPN documentary, O.J.: Made In America, is an exhaustive look at multiple facets of one of the most infamous crimes of the 20th century, but there's one small sliver of it that may be of particular interest to readers of this site. It's found in the fourth episode, and it's a two-minute breakdown that explains how O.J. Simpson was able to afford the famous "Dream Team" of attorneys that ultimately got him off when it seemed impossible. A Dream Team that, at its peak, cost O.J. an astounding $50,000 every single DAY! And keep in mind that the trial lasted 135 days, not including pre-trial, preparation and more.

Obviously O.J. wasn't poor back in 1994. Two years before his arrest, as part of his divorce proceeding with Nicole O.J. reported his net worth to be $10 million. A little more than half his net worth was the value of his Brentwood Estate. Within just a few months of being arrested, O.J. had already burned through his liquid assets such as cash and stock. He didn't want to sell his house, so he had to find a way to make some money.

How does a celebrity accused of murder make money?

To put it simply, Simpson was able to sell various pieces of memorabilia while he was incarcerated, and in a somewhat ironic twist, the fact that he was incarcerated actually raised the value of signed O.J. memorabilia (which was already pretty valuable thanks to his iconic status as an athlete and entertainer before his arrest). To that end, O.J., is reported to have dated certain items in his autographs, in order to conclusively place him in jail at the time of the signing, thus raising the value of that particular item even more. 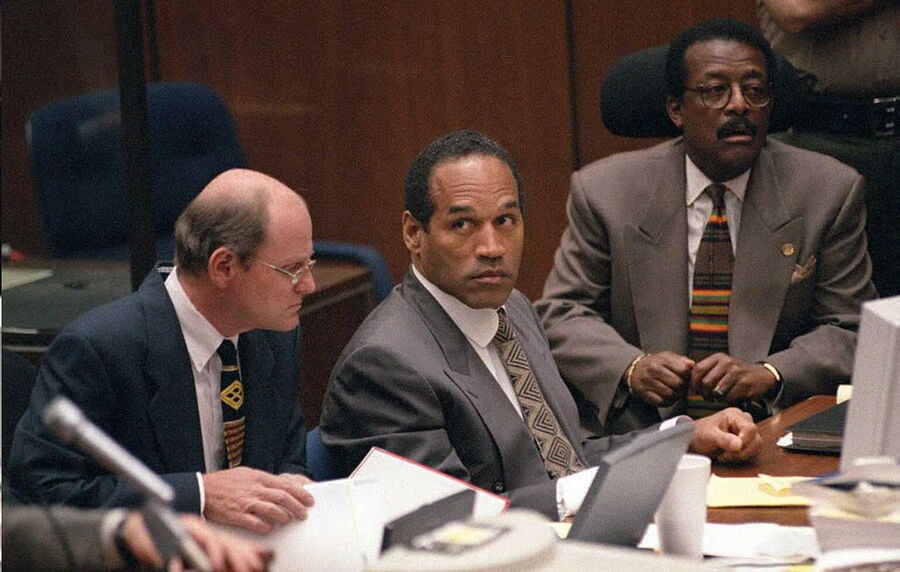 We picture people in jail making license plates, but Simpson worked just as diligently signing autographs – according to the documentary, he would sign as many as 2,500 cards in a single "session," also applying his now infamous signature to footballs and jerseys through a special, space-saving trick: A stack of fabric numbers or football panels would be brought to The Juice, he'd sign them, and then they would be sewn on to their eventual home on a football or jersey before being sold to an eager collector.

Lest you think O.J. was content to cash in on his athletic fame, signed photographs of him sitting in the courtroom were also a hot property during the trial, with some of them even scoring an autograph from Johnnie Cochran himself.

As the case morphed into the "trial of the century", Simpson continued signing a never-ending supply of merchandise. And that merchandise became more and more valuable. In total, it is believed that OJ was able to generate an astonishing $3 million by signing memorabilia… from JAIL!

As we all know, it did the trick, and Simpson's very expensive lawyers did what many thought was impossible, and he eventually walked out of the courthouse as a free man. In yet another ironic twist, though, decades later, it was a dispute over sports memorabilia that landed Simpson back in prison, and his luck didn't hold out – he remains incarcerated for robbery to this day.