Now That His Season Is Over, Kevin Love Has A Big Financial Decision To Make

During the early minutes of a Game 4 blowout victory against the Boston Celtics, Cleveland's Kevin Love got his arm tangled up with Boston's Kelly Olynyk. Love ran off the court in pain, and it came out a few days later that he was done for the playoffs, out four to six months while he recovered from shoulder surgery. He'll have to watch the rest of the playoffs from the sideline, and the Cavs will be without their starting power forward, leading rebounder and third-leading scoring.

More long-term, though, Love will have to make a decision about his future. And there are plenty of different paths he can choose. The 26-year-old All-Star signed a four year, $60.8 million contract back in 2012 when he was still with the Timberwolves. That contract has a player option on it for the 2015-16 season, so Love can opt out after this season ends if he so desires. When he was pushing Minnesota for a trade last year, he spent some time in Boston to get a feel for the city, and felt quite at home there. While Boston wasn't able to make a trade for him, the Cavaliers knew there was a possibility that he might leave after this year, whether to go to Boston or L.A., where he was born, or anywhere else. But with LeBron (and an improved Kyrie Irving) the Cavs had something at their disposal that Love had never experienced before: the playoffs.

Cleveland's thinking was that Love would get his first taste of the postseason, help bring a championship to a long-suffering fanbase, and enjoy the experience so much that he'd stick around for awhile. But when Love's shoulder got dislocated on that box out with Olynyk, it put him in an interesting position. He only played 107 postseason minutes–will that be enough to keep him with the Cavs? 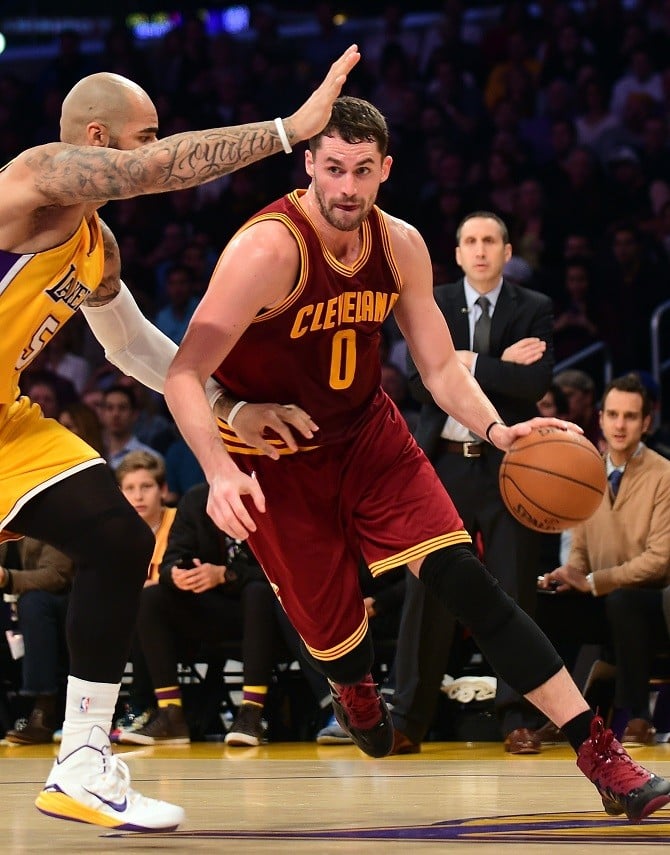 Let's take a look at Love's choices: For starters, he can decide to simply play the final year of his deal with the Cavs for $16.7 million. Then, during the 2016 offseason, he can choose to sign a long-term contract, either with the Cavs or another franchise.

But maybe Love wants more money. He could opt out of his current contract and negotiate another deal with Cleveland. Since the team owns his Bird rights–a somewhat complicated NBA rule that essentially states that a team can go over the salary cap to re-sign its own player, and can also offer more money to do so–they could give him a maximum contract of five years, with raises up to 7.5% of the salary in the first season of the contract.

Perhaps a better move would be to re-negotiate a smaller extension with the Cavs, similar to what LeBron James did this past offseason. Since the league's $24 billion broadcast deal will begin in 2016, the salary cap will be tremendously higher then that is is now–about $26 million more. That's a lot of extra million that could go in Love's pocket if he were to sign a two-year deal with a player option for the second year. Then, he could opt out and sign another hefty contract with the Cavs.

Or maybe Love decides that he's had enough of the Cavs. He can opt out this offseason and sign with another team. Granted, he could only sign for up to four years, and his annual raises would only be 4.5 percent. However, a new situation might make him more happier on the court, particularly if he can get back to being top banana, rather than the third-best player on his team.

There are many different moves for the forward to make, and it'll be interesting to see what he decides. It's a long offseason, but for Love, it's going to feel like an eternity.