Former NFL Superstar Jason Taylor isn't doing as great financially as his 15 seasons in the NFL might suggest. At least, that's according to a recent lawsuit filed by Taylor's former financial manager Eric Kim. 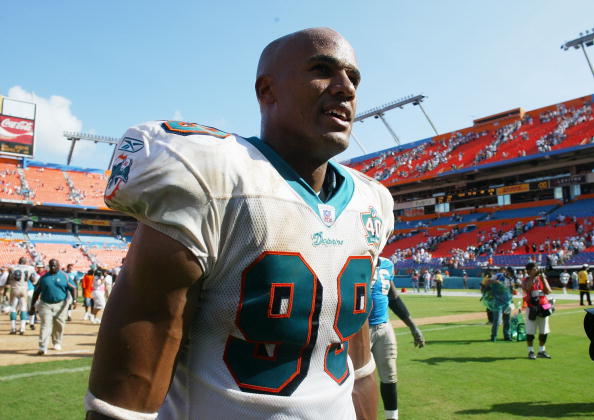 The lawsuit alleged that Kim was good friends with Taylor when Taylor "begged" investment manager Kim to help him with his out of control finances. Kim took the job handling Taylor's financial situation which was bad news because of "a history of colossal failures in his investments."

According to Kim, he did a good job, and Taylor was in the black again. It was then that Kim allegedly advised Taylor to cash out while he was ahead, but Taylor refused the advice and ended up in trouble again. At that point, Taylor started calling Kim "a thief" and even filing a lawsuit against Kim last year for fraud. He sued Kim for $275,000, but Kim has always denied any wrongdoing in the case.

Now, Eric Kim is doing more than just denying. He's suing Jason Taylor for $1,000,000, plus $15,000 for services rendered. Apparently, in addition to badmouthing Kim publicly, Taylor neglected to pay Kim for his financial services. Now, he's being sued by Kim for damage to his character and the original $15,000 in fees.

A judge has yet to rule on either of the two cases, which isn't surprising when you consider their nature. It's pretty much one person's word against another, at least as far as has been reported so far. There may be some crucial bit of evidence that proves which side is telling the truth, but until then, this might be deadlocked for months to come – if not longer.

Taylor hasn't responded to this new lawsuit publicly, but it's a safe bet that he doesn't plan to go down quietly – especially since he sued Kim first!