When Kevin Durant was a rookie, he had two competing companies desperately vying to sign the future super star to a shoe contract. As you might have guessed, those two companies were Nike and Adidas. Amazingly, Kevin opted to go with Nike despite the fact that their contract would pay $22 million LESS than than the one offered by Adidas. He must have been a big Nike fan! Even after you take out $22 million, Kevin's rookie deal was still very lucrative. Nike paid him $60 million over seven seasons, roughly $8.5 million per year. That Nike deal is about to expire, so Kevin once again finds himself accepting offers as a shoe free agent. So, is Adidas gonna pony up the dough to finally get their man? Or is Nike gonna cough up a truck-load of cash to keep one of the league's most popular and talented players? Actually, believe it or not, neither of these sportswear giants are even in the running for Kevin Durant this time around… 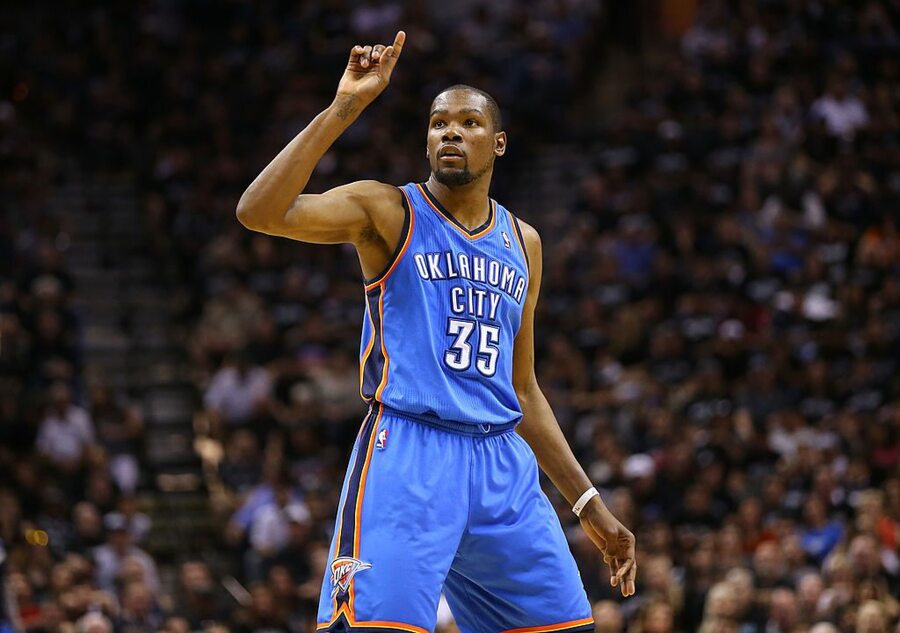 If the reports are true, Kevin Durant is on the verge of signing an absolutely ginormous shoe deal with… Under Armour. Under Armour will reportedly pay Durant $30 million per year for the entire length of the contract, which is believed to be seven years. That's $210 million, by the way. As you may have guessed from the title of this article, $30 million is WAY more money than Kevin will earn on the court next season. During the 2014-2015 season, the Oklahoma City Thunder are on track to pay Kevin $19 million. During the 2015-2016 season, he will earn $20 million. At that point, Kevin becomes a free agent. Oh, and by the way, Adidas did make a run at trying to sign Kevin this time around, but once the bidding got up to $20 million per year, they bowed out.

Under Armour may seem like an odd choice considering the fact that the company isn't really known at all for their basketball shoes. In fact, out of Under Armour's $683 million total 2013 revenues, only around $6 million came from selling basketball shoes. That's a little bit less than 1%. It may also interest you to know that Under Armour's annual marketing budget is roughly $300 million, so by the power of math, if this deal goes through, 10% of their 2014 budget will be spent on this one deal. Kind of a big gamble.

Players making more money off their shoe deals than their NBA contracts isn't actually a new phenomenon. LeBron James earned $90 million for his rookie contract with Nike, $30 million of which was paid during the 2013-2014 season. At the same time, LeBron earned $19 million on the court from the Miami Heat. During the height of his career, Michael Jordan consistently earned far more from Nike than he ever did on the court. Perhaps more impressively, Jordan (who has been retired for over a decade) still earns $100 million from Nike every year, to this day. That $100 million mostly comes in the form of royalties related to the Jordan brand.

If Lebron's rookie shoe deal with Nike was worth $90 million and Durant's was worth $60 million (and could have been $82 million if he had gone with Adidas), surely today's rookies must be raking in the cash, right? I mean, even John Wall made $25 million over five years with Reebok, when signed with them four years ago. Well, for whatever reason, the value of rookie shoe contracts has plummeted over the last few years. Maybe Nike and Adidas have been burned a few too many times by top heavy contracts with players who don't end up panning out.

Andrew Wiggins was the #1 draft pick this year. He recently signed a contract with Adidas that will pay him… $2 million per year over five years. That's $10 million for those of you who are bad at math. LeBron made more off Nike in his first year, when you include his signing bonus.

It's a trend happening around the league. Many companies just aren't willing to risk throwing so much money at an unproven rookie nowadays. As a lot of the athletes coming out now only play one year in college, there isn't even really a lot of collegiate footage to rely on. Also keep in mind that Nike did not earn a profit off their deal with Lebron until 2012, almost a full decade into his NBA career. Nike has reportedly not broken even yet on their deal with Durant, so they probably wont ever at this point.

It's unclear yet whether or not this deal with Kevin Durant will payoff for Under Armour. Let me remind everyone that back in 2012, Dwyane Wade ditched his $10 million Nike contract to sign with a Chinese shoe company called Li-Ning. No one in the US had ever heard of Li-Ning back then, and I dont think much has changed in the last two years. So this is clearly a very risky move for Under Armour. Only time will tell how this will turn out.