The Price Difference Between NFL And English Premier League (Soccer) TV Broadcast Rights In The US Is Almost Embarrassing.

By Simon Pollock on August 22, 2014 in Articles › Celebrity News

World Cup Fever faded pretty quickly here in the United States. In fact, most Americans probably stopped paying attention the second ESPN's mammoth amount of programming ended (which happened quite soon after Germany's last-minute win over Argentina). Jumping back in to replace the soccer programming, was a veritable onslaught of Lebron James coverage, and a NFL preseason coverage  that apparently grants an inside look at anything that remotely counts as a story coming out of 32 different training camps across the country. And while many rabid American Football fans chewed anxiously at their fingernails and scrutinized every detail of mock fantasy-draft analyses, over the pond a different kind of rabid football was rejoicing. These football fans, better known as hooligans, were rejoicing over the commencement of the English Premier League (EPL), which for the first time in history will be very easy to watch in America. 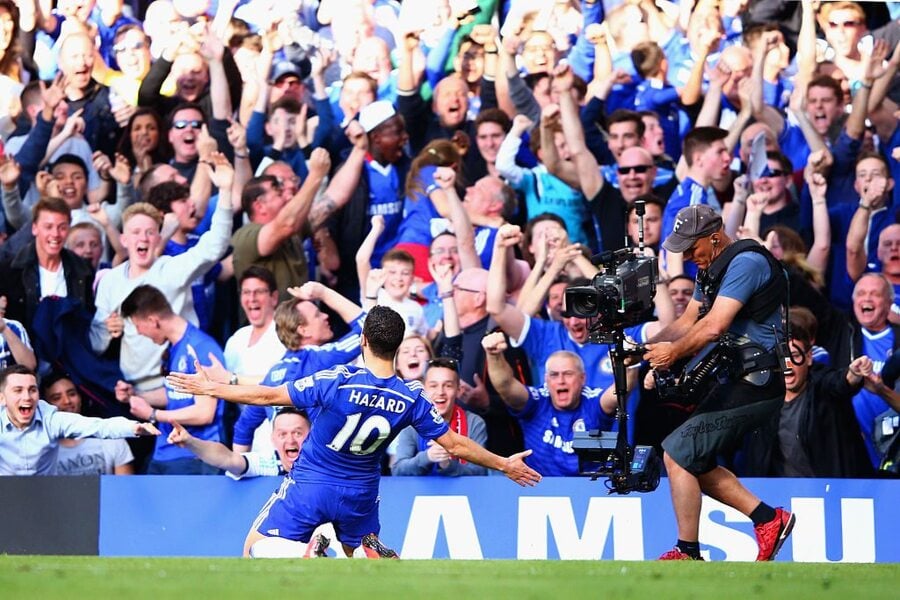 For the first time ever, this season every single EPL game will be broadcast in the United States on NBC, NBC Sports, or an affiliate. That's solid slate programming every week for US soccer games, from now through April. Often regarded one of the most talented soccer league in the world, NBC scored broadcasting rights in 2012 for -get this- a paltry $83 million a year.  For comparison, ESPN is currently paying the NFL $1.8 billion a year just for the rights to Monday Night Football.

If you have any idea just how massive soccer is in the rest of the world, you're mind may have just exploded a little bit.  Consider the fact that over 1 billion people worldwide tuned in to watch both the 2010 and 2014 World Cup Finas (viewership in the US broke records this year). Compare that to the 111.5 million people who watched the 2014 Super Bowl, and you start to get a feel for how much more the world enjoys soccer. So is it just me or is NBC getting an absolute steal with its broadcasting rights for the English Premier League, especially since soccer overall viewership in the US is actually growing?

Well, we're still talking about profits for NBC based on US broadcasting rights alone, and they're running up against the NFL. When you start looking at what ESPN earns in a year, it starts to make sense. ESPN, also known as the "Worldwide Leader in Sports" will bag over $7 billion in carriage fees from ESPN and ESPN2 (the portion of your cable bill that goes directly to the channel) between May 2014 and May 2015. That's well over half a billion a month for ESPN projected in the coming year. And how much is NBC Sports Network (the chief broadcaster for the EPL in the NBC family) projected to bring in during that same year? A little less than $300 million, or $25 million a month to ESPN's $583 million a month.

Soccer's popularity may be increasing steadily in the US (it was really, really unlikely to get all of your American Outlaws gear if you joined the US Men's National Team Fan Club during the World Cup this year), but even all the recent bad press around drugs, domestic violence, and concussions won't stop ESPN from reaping the benefits from American Football. While writers will continue to puzzle over why this country doesn't love professional soccer nearly as much as it loves U14 traveling leagues (or anywhere close to how much it loves professional football), NBC will quietly broadcast the EPL through the entire NFL season and beyond. We'll just have to wait and see how they fair.