How Much Did OJ Simpson Make From His NFL Pension While He Was In Prison?

By Joseph Gibson on October 9, 2017 in Articles › Celebrity News

Whether you like it or not, OJ Simpson is now out of prison, and he managed to do something not a lot of ex-cons have the opportunity to do: Save up a tidy nest egg while he was inside. Even better for OJ and his accountants, is the fact that thanks to state laws protecting NFL pensions, the money he got is safe from the Goldman civil ruling and with interest, has OJ in a $65 million hole and counting. But exactly how much is that pension worth? ESPN's resident wizard of finance Darren Rovell recently crunched the numbers, and they add up to another break for the Naked Gun trilogy star.

The NFL doesn't release pension info on individual players, but its general pension terms are open to the public. As a player before 1982, Simpson is entitled to an NFL pension of $250 a month for every season they played in the NFL. Simpson was in the league for 11 seasons between 1969 and 1979, so that comes to $2,750 per month – not too bad. Then, in 2011, a settlement between retired players and the NFL resulted in an extra $124 per season played before 1975, and another $108 per season after that. For Simpson's particular 11-season stint, that comes to an additional $1,284, or $4,034 per month total. 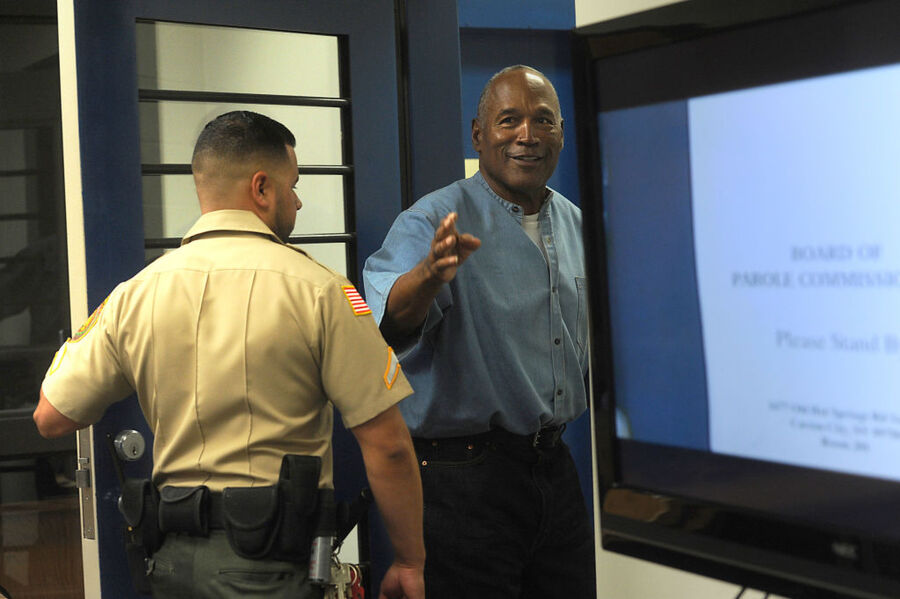 Simpson spent 108 months in prison, so that means he made a healthy $435,672 while inside. BUT, the confusion over exactly how much Simpson has collected stems from the fact that it depends on how old he was when he decided to start collecting (a lot of pensions work this way). His $4,034 a month pension is a baseline amount that he would have gotten should he have chosen to start collecting at age 55 – had he waited until 65, the NFL would have multiplied his pension 2.619 times. Even though he turned 65 while in prison he wouldn't have been collecting a pension for the first four years of his sentence, he'd still have more money waiting for him when he got out: $633,900, to be precise.

Basically, it boils down to this: If he started collecting at 55, he had $435,672 waiting for him when he got out, and if he waited until 65, it was $633,900. So regardless of which he elected to do or what he does with the money (or his future pension payouts) now, the Goldmans can't touch a penny of it, unlike any other money he's likely to make from now on.