How Much is IKEA Founder Ingvar Kamprad Really Worth?

By Mark Kurlyandchik on January 1, 2014 in Articles › Celebrity News

If you take your ÅSUNDA and put it on top of an ULSBERG, maybe throw in a DRÖMLIK or two, I'd say your bedroom would be coming along nicely, and you've likely got money left over for some Lingonberry jam. You can thank Ingvar Kamprad for that.

Born in Sweden on March 30th, 1926, Kamprad, founder of the furniture retail giant, IKEA, dove into a sales career at a very early age. As a five-year-old boy, Kamprad began selling matches to neighbors as his first entrepreneurial endeavor. It was the early 1930s and Kamprad found that matches were cheap when bought in bulk. He found them at a discount in Stockholm and was able to turn a decent profit. Two years later he learned to ride a bicycle, thereby expanding his network and increasing sales. He later included greeting cards, flower seeds, Christmas decorations, pencils, and ball-point pens in his burgeoning business. Not quite enough to earn him the $53 billion he's worth today, but enough to keep a kid in pocket money. 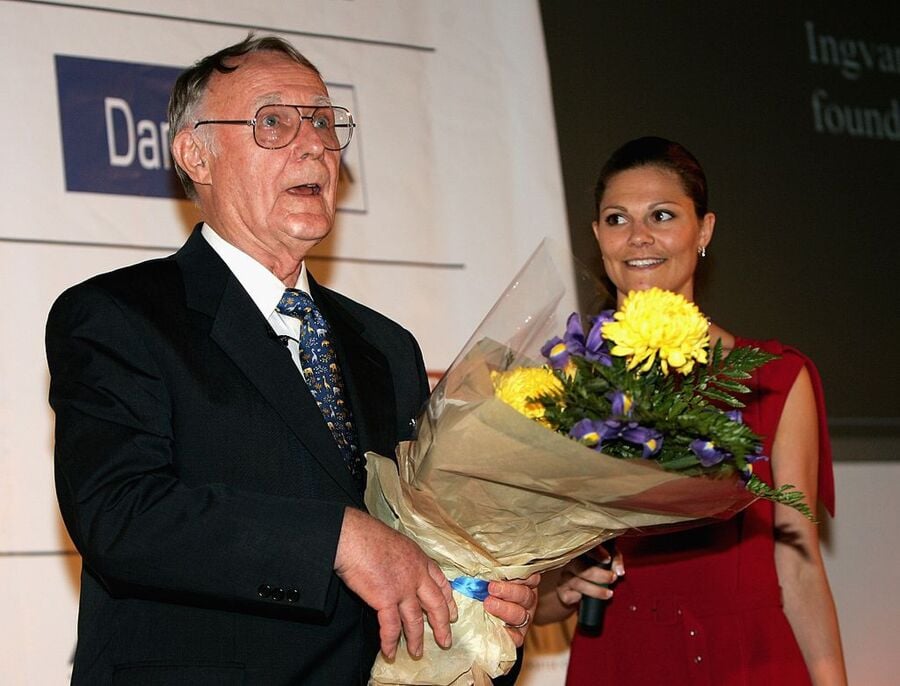 IKEA is a rough acronym that combines the first letters of his name: Ingvar Kamprad, his family farm: Elmtaryd. And the village in which he grew up lived: AgunnarΩd. Kamprad founded the company as a teenager in 1943 with money his father gave him for getting good grades. IKEA began as your run-of-the-mill mail-order company selling small household items such as wallets, pens, nylons, picture frames, watches, and jewelry. Five years later, IKEA would expand to include furniture produced by local manufacturers close to Kamprad's village. Still a mail-order business, the furniture had to be delivered to homes and railroad stations by truck.

The furniture was such a success that by the 1950s all other goods were removed from the catalog entirely. In 1953, the demand, as well as tension from a competitior, prompted Kamprad to open a showroom in Almhult. Both companies were at each other's throats, lowering prices and ultimately jeopardizing the quality of their merchandise. Kamprad's solution was to open the showroom so his customers would have the opportunity to see and touch the furniture before ordering, ensuring them that they were receiving the best value for their hard earned money.

With storage and shipping costs beginning to climb, one IKEA employee accidentally stumbled upon the solution. Attempting to fit a table into his car, he removed the legs and, voila, the idea for self-assembled furniture was born! Shipping and storing furniture would become more efficient and cost effective.

Pinpointing the Swedish billionaire's net worth has proved elusive throughout the years. Veckans Affärer, a weekly Swedish business magazine, listed him as one of the world's wealthiest people, a claim that Kamprad and his family deny since the report assumed Kamprad is the sole owner of the entire company. In 2007, Forbes magazine listed Kamprad with a net worth of $33 billion, securing him the title of the 4th wealthiest person in the world. In 2010, the number decreased to $23 billion, slotting him as 11th wealthiest. In 2011, he dropped even further to 162nd place with a net of $6 billion after his lawyers produced documents that suggested Kamprad passed the majority of his stake in IKEA to other entities. In June 2013, Kamprad resigned from the board of Inter IKEA Holding SA and revealed that his youngest son, Mathias Kamprad, is to replace Chairman Per Ludvigsson, noting that he saw it as a good time to hand over control to the next generation.

Then, there is the rather confusing structure of the Stichting INGKA Foundation — Kamprad is its chairman — which owns INGKA Holding, the parent company of all IKEA stores. It was reported by The Economist in May 2006 to be the world's wealthiest charity, with an estimated value of $36 billion. Of course, its intended purpose is that of a tax shelter for the IKEA group. In fact, Ingvar hates taxes so much that he actually moved to Switzerland for more than 40 years to avoid the extraordinarily high taxes in Sweden. He returned in June 2013.

In 2012 Forbes dropped Kamprad's net worth to $3.3 billion. As of January 1, 2014, both Bloomberg.com and our researchers here at CelebrityNetWorth, maintain that Kamprad is still worth $53 billion. Regardless of IKEA's complex corporate setup, at the end of the day, Ingvar is still the sole person in control of the entire corporation. According to Bloomberg: "The asset is held through a complex ownership structure of foundations and other legal entities designed to protect the Ikea concept and assure its long-term survival. Because Kamprad ultimately controls this structure, he is credited with the full value of the Ikea companies. Kamprad disputes this."

Regardless of whether or not he is worth $3 billion or $50 billion, Ingvar Kamprad is certainly a strange billionaire. Despite his vast wealth, he is well known for denouncing lavish lifestyles. It is said that the furniture tycoon prefers flying coach over first class, he drives a 1993 Volvo 240, and saves salt and pepper from restaurants. That's not how I would behave if my bank account was 10 digits! How about you?