Where Does The Money Go When An NFL Player Gets Fined?

During the 2014-2015 season, the NFL fined 230 players for a wide variety of infractions. The fines covered everything from a simple on-field rule violation, to a more complicated extracurricular faux pas. The most common infractions this season were: #1) roughing the passer, #2) late hits, #3) face masks, #4) unsportsmanlike conduct, and #5) fighting. But players can also be fined for something seemingly innocent like wearing Beats By Dre headphones during a press conference. Speaking of which, failure to appear at a press conference can cost a player BIG bucks. Just ask Marshawn Lynch (more below). During the 2014-2015 NFL season, the league levied a total of $25,706,265 in fines. So where does that money go? Please tell me it doesn't "direct deposit" right into Roger Goodell's bank account…

Recently, Marshawn Lynch has become the NFL's poster boy for receiving fines. The NFL has dinged the Seahawks running back for big bucks on a number of occasions. He was fined $50,000 in November for violating the league's media policy, and had to pay an additional $50,000 at the same time for a fine imposed the previous season. After the NFC Championship Game victory over the Green Bay Packers, Lynch was fined $20,000 for his patented crotch grab touchdown celebration. He had already been fined $11,050 in December for a similar "celebration." The league even threatened to take another $50,000 out of Lynch's pocket if he wore gold cleats instead of Seattle's standard-issue blue cleats. 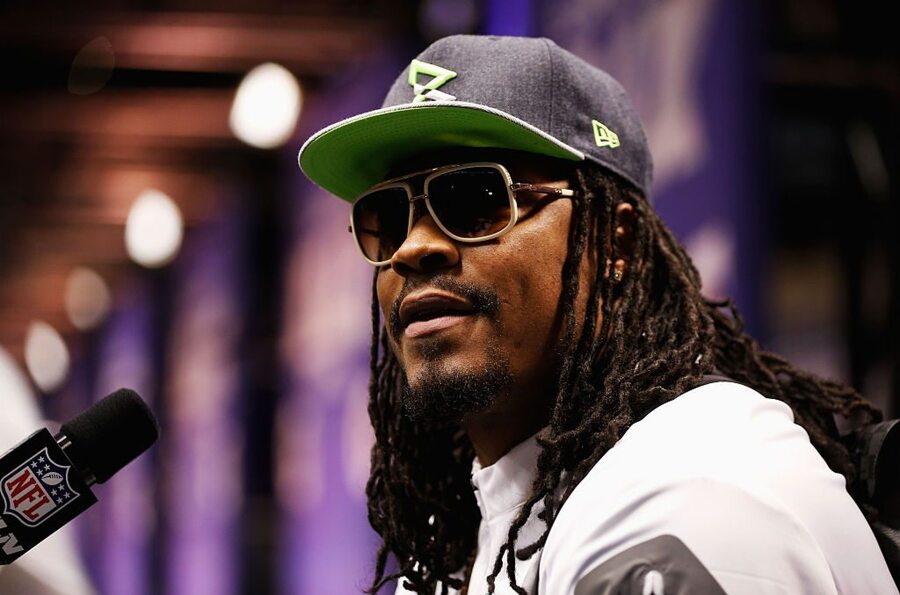 Earlier this week, the NFL threatened to fine Marshawn $500,000 if he didn't appear at Tuesday's Media Day during Super Bowl week. Marshawn did show up, but took a unique approach to the Q&A session. During the five minutes he appeared at the conference, Marshawn accepted 29 questions. And he answered every single query with the some variation of the following phrase: "I'm here so I won't get fined."

A simple hack that worked! Marshawn successfully avoided a fine. Though there are still ample opportunities for him to get docked a paycheck in the coming days. You have to watch this supercut of Marshawn's press conference yesterday. It's hilarious:

Where Does Fine Money Go?

According to the NFL, 100% of the money collected from fines goes to charitable causes. A 2011 statement released by the league said that its foundation, NFL Charities, raises more than $2 million per year through fines, and that money is sent to either the NFL Player Care Foundation, which provides medical, emotional, and financial assistance to retired NFL players, or the NFL Players Association Player Assistance Trust, which helps the families of both professional and amateur football players experiencing a crisis. On occasion, but much less frequently, the money goes to disaster relief or health-related charities backed by the NFL. Some players even request that their money go to a specific charity, but the league doesn't always grant these wishes.

Sometimes an NFL fine can turn into a good thing! In 2010, Chicago Bears wide receiver Brandon Marshall, who suffers from borderline personality disorder, was fined $10,500 for wearing green shoes during a game in recognition of Mental Health Awareness Week. Not only did he agree to pay the fine, but also to donate an equal amount to a charity of his choice and to auction off the shoes that caused him to get fined. Marashall explained: "Football is my platform not my purpose. This fine is nothing compared to the conversation started and awareness raised."

And in case you are curious, the Patriots are due to be fined $25,000 if the league determines they were at fault for the deflated footballs incident (what, you didn't think you'd read an NFL article that didn't mention "Deflategate," did you?). They could also lose a few draft picks, but considering the size and value of the organization, $25,000 is chump change.

This means that in the eyes of the NFL, wearing the wrong shoes without first telling the league is a bigger crime than tampering with the footballs used by the team during a game. Incredible.

Are NFL Fines A Tax Write-Off?

Interesting question! The answer is yes and no. According to the IRS, fines that are the result of an on-field infraction can be considered business expenses and therefore be written-off of a player's taxes. Unfortunately, fines that are the result of off-field, extracurricular activities (arrests, wearing Beats By Dre, press conference no-shows, elevator punches…) are NOT tax deductible.

Side Trivia: Nike released the first line of Air Jordan sneakers on September 15, 1985. One month later, NBA commissioner David Stern banned Michael from wearing the shoes in games. Stern's reasoning? The red and black color scheme didn't match the shoes and jerseys being worn by Michael's Chicago teammates. Michael ignored the ban. Stern responded by levying a $5,000 fine every time Michael wore the shoes. At this point, some brilliant Nike executive stepped in and announced the company would be covering the cost of the fines. This ridiculous controversy created a firestorm of free publicity for the shoes. Nike even capitalized on it by making a commercial with the tagline: "The NBA threw them out of the game. Fortunately, the NBA can't stop you from wearing them."

In total, Nike happily paid a few hundred thousand dollars in fines before the NBA finally gave up. No word on where that money went. Probably straight into David Stern's bank account.