Man Faces 20 Years In Prison For Deliberately Crashing $1 Million Bugatti Into A Lake For Insurance Scam. Crazy Story – With Video!

Back on November 11, 2009, a 34 year old exotic car dealer named Andy Lee House decided to take leisurely drive along a highway in Galveston, Texas. Conditions were perfect. The sun was shining, roads were open, highway patrolmen (with their pesky speed traps) were few and far between. It was a truly perfect day for Andy to take his 2006 Bugatti Veyron for a ride. In case you've been living under a rock, the Veyron is one of the rarest, most expensive, and fastest street-legal cars in the world. There have only been a total of 300 Veyrons manufactured to date. It has a top speed north of 267 MPH and, if you can find one that's available for sale, the base sticker price is $1 million.

Pop quiz: Pretend you own a Veyron. One day, you're driving along a highway at a reasonable speed, when all of a sudden, a pelican jumps in front of the car. What do you do? Would you run right over the dumb bird or would you swerve off onto the side of the road, potentially putting your precious vehicle in harm's way?

Follow up pop quiz: What if swerving to avoid the pelican meant that you would be forced to drive straight into a nearby lake which would almost certainly total the car, while also putting your own life in grave danger?

What would you do? Just a reminder, this is what the Bugatti Veyron looks like: 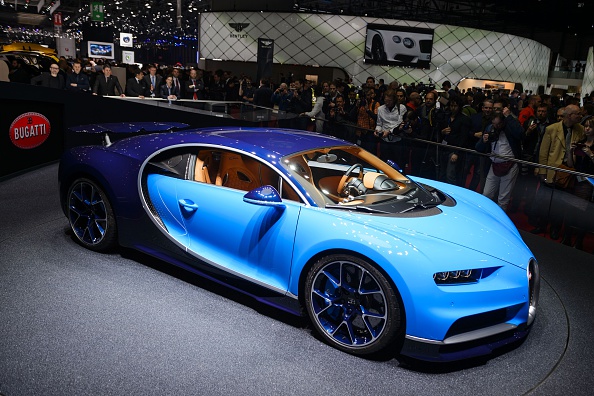 Faced with this exact scenario, Andy Lee House chose the bird over the car. As he would later explain to his insurance company, Philadelphia Indemnity, Andy was driving on a road in East Texas that is sandwiched between a highway on his left, and a lake on his right. He was driving the speed limit when all of a sudden this damn pelican jumped in front of the car. He instinctively swerved to the right and drove straight into a lake.

To make matters worse, once Andy was in the salt water, he was unable to turn the car's engine off because he was immediately attacked by a swarm of mosquitoes. Subsequently, the engine continued to run while the car was submerged for another 15 minutes until it eventually died on its own. Unfortunately, because the engine was left running for so long underwater, it was completely un-salvageable.

When emergency vehicles and a towing company showed up on the scene, Andy seemed to take the nightmare in stride. I guess that might have been understandable. The car was insured after all. As a matter of fact, the car happened to be insured for $2.2 million, more than twice the blue book value. And as if that wasn't fortunate enough, Andy happened to have bought the insurance policy just three weeks earlier!

He survived a dangerous car crash into a lake. He managed to fight off a swarm of angry mosquitoes. He saved an animal's life. And to top it all off, he was about to receive the full value of the totaled car PLUS an extra $1.2 million from an insurance policy that had been purchased less than a month earlier. Andy Lee House was one lucky guy.

First off, when a team of investigators from Philadelphia Indemnity traveled to the crash scene, they couldn't find any skid marks on the road leading up to the crash. That was pretty strange considering his story of a sudden high-speed swerve. Secondly, the investigators found it slightly suspicious that Andy would leave the engine running. The car starts and stops with a push of a button. It was their belief that even someone who had just experienced a sudden accident, and was now being viciously attacked by mosquitoes, would still have the mindfullness to turn the car off and therefore save the engine from being completely ruined forever.

Oh, and then there was this one tiny problem:

Andy Lee House is either extremely dumb or extremely unlucky, and probably a little of both. As he was driving along that East Texas road, an exotic car enthusiast happened to be in the passenger seat of a car on the nearby highway. This exotic car enthusiast spotted the Veyron, immediately whipped out his camera and started filming. Here is the exact video he captured then uploaded to YouTube:

Notice anything strange or missing in that video? A few months after the accident, by some miracle, an employee of insurance company Philadelphia Indemnity was sent a Youtube link over email. After a few replays, the employee was stunned to realize that this was actual video footage of the exact moment Andy Lee House crashed into a lake in order to avoid hitting a pelican. Unfortunately, as the video clearly shows, there was no pelican. There was no last second swerve to avoid killing the animal. In reality, Andy appears to very calmly and very gradually veer the Bugatti off the road, directly into the lake. That explains the lack of skid marks on the road and the lack of grateful pelican to back up Andy's story.

Yesterday, Andy Lee House finally admitted to a judge in Beaumont, Texas that he did in fact drive his Bugatti into the lake on purpose to collect the insurance money. There was no pelican or mosquito swarm. He left the engine running on purpose to ensure the car would be completely totaled. He made the whole story up for the money.

So not only is Andy Lee House on the hook for the $1 million value of the Bugatti (plus legal fees over the last few years), he now also faces real time for his fake story. Apparently Federal prosecutors do not take insurance fraud lightly. After pleading guilty yesterday to wire mail fraud, Andy now faces 20 years in federal prison.