When best-selling author Tom Clancy died in 2013 due to an undisclosed illness, he left behind an estate worth $83 million. Clearly this is not typical for authors, many of whom struggle to sell their books. Clancy sold millions of copies of the 20 novels and 11 non-fiction books that he wrote in just under 30 years as an author. Seventeen of Clancy's books have been on the New York Times bestseller list. More than 100 million of his books are in print. Clancy's heirs will continue to earn from book sales for generations to come.

So let's say you're a young (or middle aged, Clancy didn't get his start until he was 38, Gillian Flynn's first hit book, Gone Girl didn't come out until she was 41) aspiring novelist and you prefer not to:

It is just me? Well, nevertheless, the point remains that 99% of the world's authors do not make the kind of money Tom Clancy has. However, with a little careful planning (and a lot of luck), you can turn your literary prowess into a net worth to be proud of. Here's how Tom Clancy did it. 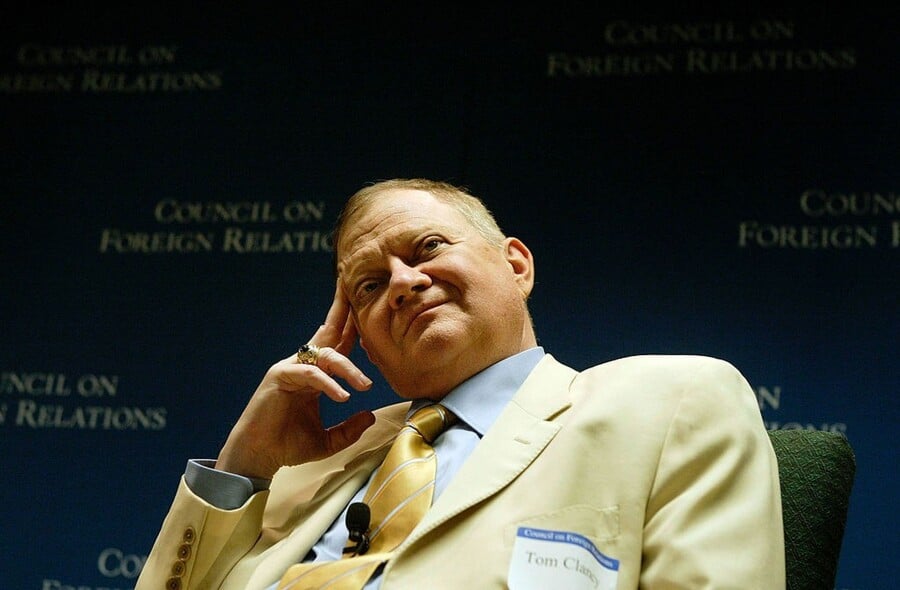 Tom Clancy was born on April 12, 1947 in Baltimore, Maryland. He graduated from Baltimore's Loyola University in 1969 with a degree in English literature. After college, Clancy joined the Army Reserve Officer's Training Corps, but he never saw active military duty because of his extreme nearsightedness. After graduating from the Training Corps, he went to work for an insurance company in Hartford, Connecticut. In 1973, Clancy went to work for the O.F. Bowen Agency, a small Owings, Maryland based insurance agency founded by his wife's grandfather. In 1980 he purchased the insurance agency from his wife's grandfather and wrote novels in his spare time. It was while working at the insurance agency that Tom Clancy wrote his debut novel, The Hunt For Red October. You might have heard of that one. Clancy was 38 years old and he'd been working as an insurance agent for 15 years.

Let's take a break from the bio and look at what Clancy did. He forged a stable, if unexciting career that supported his family and also left him enough free time to write a novel. What did he write the novel about? Something he was interested in and passionate about. Clancy made a career of writing military thrillers. It didn't help that they were also cinematic. Clancy has had five feature movies made from his books: The Hunt for Red October, Patriot Games, Clear and Present Danger, The Sum of All Fears, and Jack Ryan: Shadow Recruit.

When it came time to do his next book deal in 1988, Clancy was paid $3 million for three novels. By 1997, Penguin Putnam paid Clancy $97 million for the worldwide rights for to a multi-book/multi-media deal. The ABC television miniseries Tom Clancy's Net Force was born out of this deal.

What Clancy did, knowingly or not, was savvy. He tapped into the deeply American subject of being obsessed with our military. He then wrote meticulously researched thrillers that focused on political intrigue and military tactics. In The Hunt for Red October, Clancy introduced the character Jack Ryan. Ryan went on to become the protagonist of most of his novels. His characters and stories also provided the inspiration for the Rainbow Six, Ghost Recon, and Splinter Cell video game series. In fact, in 2008, the French video game company Ubisoft purchased the use of Clancy's name for an undisclosed sum.

Clancy was one of only three authors to sell two million copies of a first printing in the 1990s. Clancy's 1989 novel Clear and Present Danger sold 1,625,544 hardcover copies, making it the #1 bestselling novel of the 1980s.

In 1993, Clancy, along with a group of investors bought the MLB's Baltimore Orioles. His initial $42 million investment earned his estate a $230 million pretax profit recently.

Tom Clancy died on October 1, 2013, of an undisclosed illness. He was 66-years-old. Clancy was survived by his wife, Alexandra, their daughter, and four children from his first marriage.

Tom Clancy left behind a $2 million stone mansion on an 80 acre estate in Calvert County, Maryland. The property has a panoramic view of the Chesepeake Bay and features a World War II era M4 Sherman tank.

Clancy and his second wife also owned a 17,000-square-foot penthouse condo in Baltimore which is currently for sale for $12 million and is Baltimore's most expensive residential property.