By Brian Warner on January 30, 2013 in Articles › Celebrity News

Here's a little secret insight on how Celebrity Net Worth works: Once we add a celebrity to the site, we also decide how often that person needs to be monitored to ensure our data is always as accurate and up to date as possible. Some celebrities can safely be updated just once a year, some people are re-visited every quarter, others are tracked monthly. We literally have a spreadsheet that lists everyone in their priority category. Then there's Lindsay Lohan. Because Lindsay's personal life and financial situation is such a turbulent roller coaster ride, we basically have to monitor her net worth on a daily basis. Over the past few years, we have updated her net worth ten times more than any other celebrity on the site. Lindsay's income is like a constantly moving target. One minute she's having money problems, the next she makes a million bucks posing for Playboy. Unfortunately, Lindsay's finances have been on a nearly constant downward spiral for the last two years and today we are hearing rumors that she is 100% totally and completely flat broke.

Lindsay Lohan's first big paycheck came from the 2003 comedy "Freaky Friday", for which she earned $500,000. Not bad considering she was just 17 years old at the time! Freaky Friday solidified Lindsay as a bonafide Hollywood star and landed her the starring role in 2004's "Confessions of Teenage Drama Queen" and a cool $1 million paycheck. Her big breakout role came later that year in Tina Fey's comedy "Mean Girls", for which she again received $1 million. Mean Girls would eventually gross $130 million worldwide and lead to Lindsay to a string of fresh roles like "Herbie Fully Loaded" and her biggest pay day of all time, when she earned $7.5 million for the 2006 movie "Just My Luck". 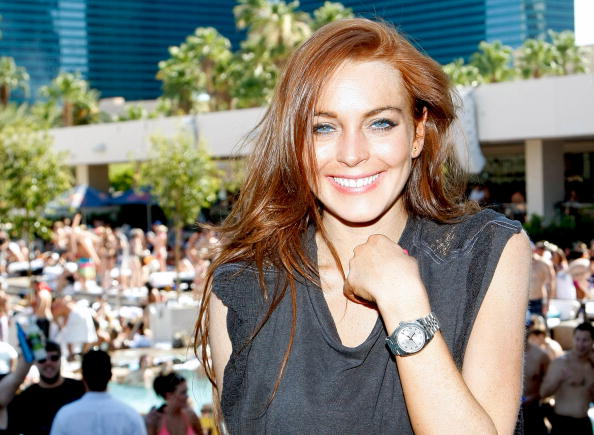 Unfortunately things start to come off the rails starting around 2007 when Lindsay's personal life began to impact her professional career. Rumors that she was difficult to work with and constantly late to sets from partying all night, caused good roles to dry up quickly. The fact that Lindsay's box office performance waned dramatically did not help her cause. Her 2007 movie "I Know Who Killed Me" was universally panned by critics and earned just $9 million worldwide at the box office. Lindsay has not starred in a major studio release since 2007 because she was seen as unreliable and un-insurable thanks to her hard partying lifestyle and various legal problems. In 2012, Lohan was paid $300,000 to appear in the Lifetime TV movie "Liz & Dick" and $200,000 to make a cameo in "Scary Movie". Lindsay's earned just $6480 to star in her most recent project "The Canyons" which again is being widely panned and failed to get accepted at Sundance or any other major film festivals.

One major problem with Lindsay's life choices is that as her paychecks dried up, her lifestyle did not slow down. Lindsay spent much of 2012 renting a Beverly Hills mansion that cost $8000 per month. She somehow also to racked up a $40,000 bill at a tanning salon, a $90,000 bill at a Limousine company, a $144,000 storage locker bill and a $46,000 tab at luxury hotel Chateau Marmont. Lindsay purchased an $80,000 Porsche, gave her mom $40,000 to save their Long Island home from foreclosure and still managed to be seen partying around the world nearly every night. She also was arrested on numerous occasions (shoplifting, DUIs, etc) and has spent nearly $300,000 on attorney fees since 2010. Oh, and by the way, Lindsay forgot to pay $234,000 worth of taxes for 2009-2010.

Without any consistent income and plenty of outstanding debt, Lindsay posed nude in Playboy magazine in December 2011. She earned a $1 million paycheck for the spread which unfortunately barely kept her head above water. Fast forward a little more than a year to today and we are learning that Lindsay Lohan is allegedly flat broke. Sources close to the actress have reported that Lindsay was forced to move back in with her mom in Long Island because she does not have enough cash or credit to qualify for even a simple two bedroom apartment in Los Angeles. The source claims that not only is Lindsay's credit horrible, she just simply doesn't have enough liquid funds that would be required for a first month, last month and security deposit. Considering an average two bedroom apartment in Los Angeles would cost roughly $2500 per month to rent, that would imply that Lindsay Lohan doesn't have $7500 to her name. That is incredibly sad and pathetic if it is true.

On the bright side, I'm sure there's some sleazy rich guy out there who would love to take Lindsay under his wing, at least temporarily. And I'm sure there is some porn producer who would pony up serious cash to see Lindsay go all the way on camera. Or who knows, maybe her career will make a huge come back. Let's not forget that Robert Downey Jr wasn't much better off when he was arrested for drugs back in 2000 and now he's one of the biggest stars on the planet again! There's hope Lindsay! For now, we are listing Lindsay's net worth at $10,000. But like I said earlier in this post, we're on high alert to bring that down at any time…