Founded back in 1998, the Leonardo DiCaprio Foundation is hosting its third Auction Gala, where wealthy fans can bid for the opportunity to spend time with DiCaprio at the US Open Men's Tennis Final, or instead a large list of other celebrities. There are plenty of physical prizes as well, including movie props, art pieces, and high class accessories, such as Rolex watches.

The Leonardo DiCaprio Foundation is raising money to promote its mission of environmental conservation. A few have criticized the personal use of energy in attending such events via private airliners, and DiCaprio must be careful to address these concerns.

Well known auctioneer Simon De Pury will be conducting the sale, which he expects to be much larger than any previously held by DiCaprio. The first auction raised over $25 million, while the second raised more than $40 million. This time, the diverse offerings will bring in a much broader range of bidders. Simon De Pury credits this to DiCaprio's great relationship with the art world.

One such artist is Camille Henrot, a French painter whose art has only appeared at auction four times. His watercolor painting is estimated to sell past $40 thousand. An oil painting by German Jana Euler is expected to sell for over $65 thousand. Established artists like Jeff Koons, George Condo, Cai Guo-Qiang and Damien Hirst are expected to sell paintings which are estimated to sell between $250 thousand and $2.5 million. Koons's oil painting Gazing Ball (Manet Spanish Singer) carries a current estimate of 1.98 million British pounds. Amongst a wide range of paintings and sculptures are even two Picasso pieces up for auction. 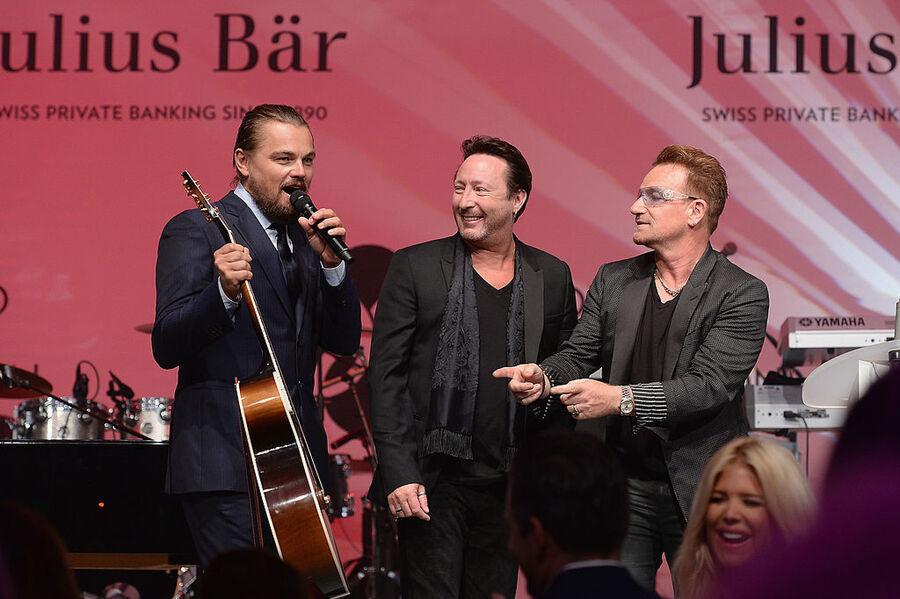 Movie set items include DiCaprio's survival tools from the Revenant, as well as Schwarzenegger items including his Harley Davidson from Terminator II, his sword from Conan the Barbarian, and a cigar, boots and humidor set. Other swag includes two personalized Fiat 500s, two of U2 frontman Bono's guitars, and a 1950 Jaguar Mark V Drophead signed by more than a dozen Hollywood A-listers for over $215 thousand.

The most anticipated prizes are undoubtedly the opportunities to meet and attend events with a wide range of celebrity names. Prolific film author Martin Scorsese is offering up an opportunity for one lucky winner to join him for a week on set, while Producer Harvey Weinstein is offering the chance to accompany him to a year's worth of film events. Kevin Spacey is offering a private theater experience, while other bidders can enjoy a private game of Texas Hold Em with Edward Norton and Jonah Hill for around $150 thousand. Bidders can also opt to meet Margot Robbie and Doutzen Kroes, with the former offering a chance to be a personal guest at the Victoria's Secret Fashion Show.

There are a number of vacation destinations included, such as a tour of Monaco led by Prince Albert II or three ice-filled trips with Explorer Johan Ernst Nilson. There are tropical stays offered the Bahamas, Thailand, French Polynesia, the Maldives or DiCaprio's Palm Springs home, and there is even a chance to press the button to illuminate the Eiffel Tower. Veronica Varekova and Adrien Brody are also partnering with LDF on wildlife explorations in Rwanda and Kenya.

The huge auction booklet spans over seventy pages of various gifts, and promises to bring the DiCaprio Foundation huge profits for its environmental causes.