Dean Smith is arguably the greatest coach in college basketball history. Over 36 seasons at North Carolina, he won 879 games, which was a record at the time he retired. And now, he can add about 180 more victories to his resume. Dean Smith died on February 7, 2015 at the age of 83. Earlier this week it was revealed that as a part of his will, he left $200 to every winner who played under him during his time at UNC. That's around 180 checks written out by his estate, for a grand total of $36,000.

In addition to those 879 victories, Smith won two championships while coaching at UNC, in 1982 and 1993. Former Tar Heel Dante Calabria, a member of the 1993 championship team, shared his letter from Coach Smith online. It said to "enjoy a dinner out compliments of Coach Dean Smith." 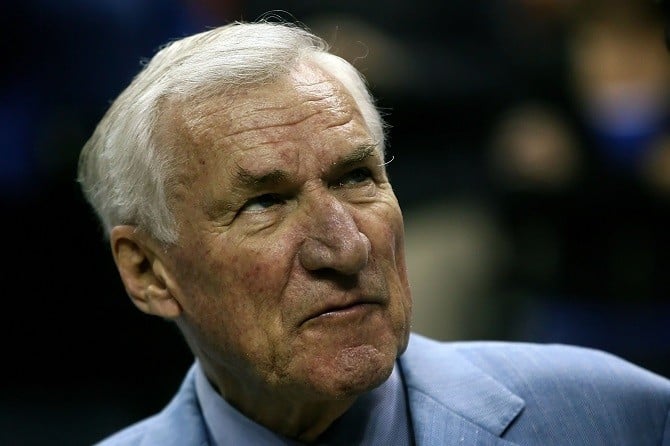 While Smith's former players have said this was a surprise, it's hardly unexpected behavior from a coach who has always had his team's best interests in mind. His players had a 96.6% graduation rate during his tenure, and he helped bring an end to segregation in North Carolina by recruiting the university's first African-American player.

And in a shocking twist, the NCAA actually supports this move. They tweeted out a message regarding questions about Smith's gesture: "Contrary to inaccurate media reports, Dean Smith's generous gift to former student-athletes is NOT an NCAA violation."

One of the players to receive $200? Michael Jordan. As the only professional baller to ever reach billionaire status, this is a small ripple in the water for him. But who knows? Invest that $200 and maybe Jordan will see a trillion dollar net worth someday. Or more likely, he'll just enjoy a nice steak and lobster with the money. Both are very commendable choices.