By Joseph Gibson on October 19, 2017 in Articles › Celebrity News

Hustler founder Larry Flynt is doing what seemingly all living celebrities from the latter half of the 20th century are doing these days, and going back to the creative wells that made them (in)famous in their primes. In Flynt's case, that means getting back into the full page ad game, a practice he perfected in the late 90s when an ad he placed promising a reward for information on the extramarital affairs of members of Congress led directly to the resignation of Republican Congressman Bob Livingston in 1998. Flynt has his sights set higher than Congress now, though, offering a reward of up to $10 million for information that leads to "the impeachment and removal from office of Donald J. Trump." 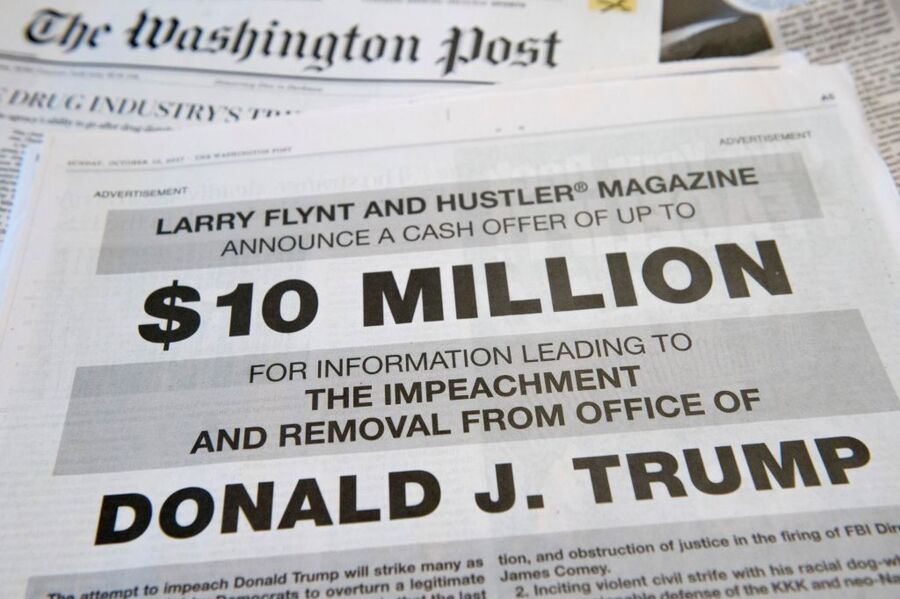 Only time will tell whether Flynt's reward gambit will pay off, but in a subsequent phone interview with The Washington Post, Flynt seemed optimistic about his prospects, saying he expected to start receiving information in a matter of days, and that he would release any such relevant information to the public as soon as possible. He also defended the practice of paying money for such information:

"Just because you pay for it does not mean it's not any good. I don't think you can live as recklessly as Trump has for 30 years and not leave some baggage along the way . . . I can't think of something more patriotic to do than to try to get this moron out of office."

As of this writing, Flynt hasn't released any such info, but we're still comfortably within his "few days" timeline, so stay tuned.