By Mark Kurlyandchik on June 13, 2015 in Articles › Celebrity News

There are power couples who don't need last names to be recognized — Jay Z and Beyonce, Bill and Hillary, Kim and Kanye, to name a few. And then there are those whose family name says it all, as in the case of Sir Evelyn de Rothschild and his wife, Lady Lynn Forester de Rothschild. Together, they make up one of the most powerful and richest husband and wife duos in the world, with a combined net worth of $20 billion. But you wouldn't recognize them as Evelyn and Lynn alone, even though Hillary Clinton might.

Back in 2008, Lady Lynn, who was already successful on her own merits before marrying the richest member of the Rothschild dynasty, was a fierce supporter of Hillary Clinton's presidential campaign. After Obama trounced Hillary in the Democratic primary, Lynn drew headlines by turning her back on her party's nominee, catching flack for calling Obama an "elitist" who had "trouble connecting with ordinary Americans." The irony of one of the most powerful women in the world calling anyone else an elitist was not lost on the press. Coming out in support of the Republican McCain/Palin ticket did not help Lynn's populist image. But now with Hillary running again, Lynn is back in the spotlight as a true-blue supporter, reportedly hosting a fundraiser for the 2016 candidate on her current tour.

"I really think it's vital for our country to get Hillary Clinton elected," she recently told The Washington Post. "I'm feeling like this is it."

But, other than being a Rothschild wife, who is Lynn Forester? And why is she so set on a Hillary presidency? 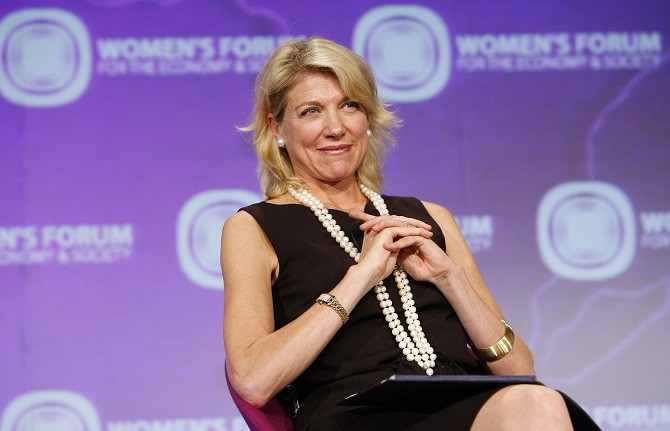 Born in 1954 and raised in the middle-class town of Oradell, New Jersey, Lynn grew up with a businessman and a pilot for a father, the president and owner of General Aviation Company. Her first business venture came at the age of 16, when she sold U.S.-made jeans during a family trip to Israel for up to 10 times what she paid for them. After graduating from Pomona College, she went on to law school at Columbia.

In the early '80s, her burgeoning career in law took a turn after doing some legal work for broadcasting titan John Kluge, formerly the richest man in America. This chance meeting with one of the most powerful men in the world proved formative for Lynn, and she ended up serving as an executive overseeing development at Kluge's Metromedia Inc. for five years. After her stint at Metromedia, she made some wise investments in the wireless and broadband communications industries in Latin America and Europe, buying up unused spectrum for cheap and selling it at a premium. She cashed out in 1997 for a deal worth more than $100 million.

Already a dazzling financial success by any measure, another chance encounter with one of the world's most powerful men rocketed Lynn into the upper echelons of wealth and power in 1998. At that year's Bilderberg conference, which annually gathers some of the world's most powerful people in banking and politics, Henry Kissinger introduced Lynn to Sir Evelyn de Rothschild of the English branch of the European banking family, one of the family's wealthiest living members and financial adviser to the Queen of England. Rothschild was enamored, and left his wife for Lynn, who is 23 years younger than him. After their marriage — the third for both — in London in 2000, the couple spent their honeymoon at the White House at the request of the Clintons, personal friends of Lynn's. She also served as an adviser to Bill during his presidency. Interestingly enough, it was Bill Clinton who signed the game-changing Telecommunications Act of 1996, which deregulated the broadcasting and telecommunications industries.

Now, Lynn is CEO and Evelyn is Chairman of E.L. Rothschild, a private investment firm that had major interests in produce exports in India before the recession. The company now has holdings in African renewable energy and mobile communication, American wealth management services, real estate holdings in North America and Europe, a London-based private jet service, and a majority stake in The Economist Group, publishers of The Economist magazine.

The couple split their time between a sprawling 3,200-acre estate known as the Ascott House in Buckinghamshire, England, acquired by the Rothschilds in 1873, as well as a swanky Chelsea townhouse and a summer home on Martha's Vineyard.

Is Lynn dead set on a Hillary presidency simply out of personal friendship? To support a fellow powerful woman? Or because she knows that Hillary will have her business interests in mind, like her husband did back in 1996? Lately, Lynn has been campaigning for "inclusive capitalism," outlining a 10-point plan to save capitalism as we know it. It's possible that compared to some of her competition, Hillary offers her friend the best chance for success.