By Joseph Gibson on December 16, 2015 in Articles › Celebrity News

Last Wednesday at the Hollywood home of legendary actor Kirk Douglas, a giant banner reading "99 Today" was made out of red and white roses. The occasion, naturally, was to celebrate the actor's 99th birthday, but the elaborate banner was far from being the only gesture made in observance of Douglas' last double-digit birthday.

However, the biggest gesture was made by Kirk Douglas, not for him, in the form of a $15 million donation to the Motion Picture & Television Fund, which in turn announced their intentions to build the two-story Kirk Douglas Care Pavilion. The Pavilion will be for the treatment of Alzheimer's patients (up to 80 at one time) who previously worked in movies or TV, and the facility is expected to carry a $35 million price tag all told, with construction slated to begin late next year. While giving a gift on your birthday rather than getting one might seem strange from a traditional standpoint, it came as no surprise to the chairman of the Motion Picture & Television Fund Foundation, Jeffrey Katzenberg, quoted like so in a Yahoo! story about Kirk's birthday:

"It is in keeping with Kirk's philosophy of giving back to the entertainment community that he is the one giving us the gift on his birthday instead of us lavishing one on him." 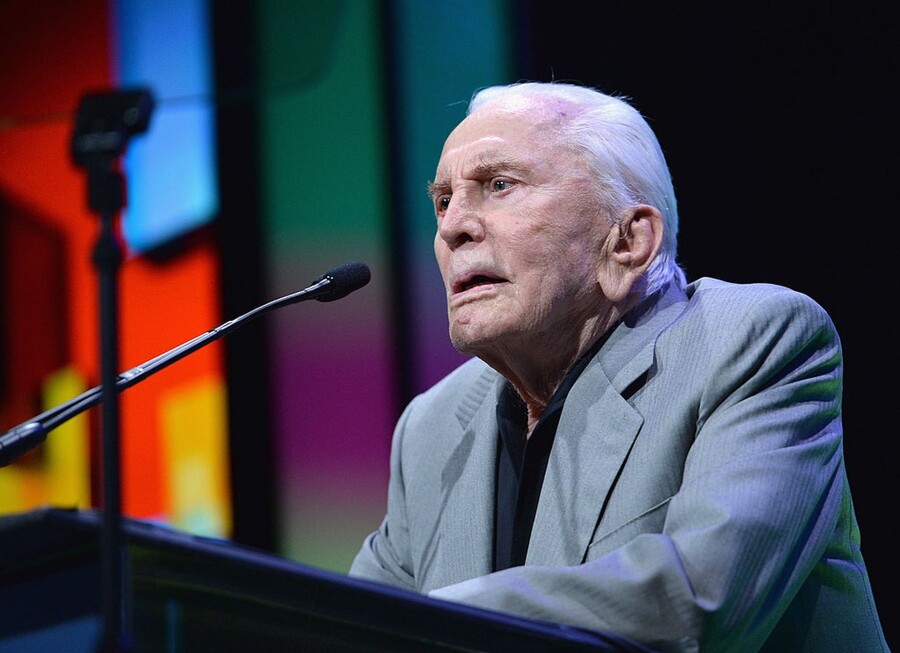 The gift solidified Douglas and wife Anne as two of the most sizable donors in the history of the foundation, having donated more than $40 million over the course of their giving (not bad, given Kirk Douglas' estimated net worth of $60 million). From a statement released by Kirk Douglas about why he chose such a cause for his big 9-9:

"When Jeffrey Katzenberg explained the urgency of enlarging  the current facility to accommodate more patients, we had to say yes. Jeffrey knows it is our philosophy to provide funding where it is needed most. The Kirk Douglas Care Pavilion is going to help a lot of families in our community."

Kirk Douglas' 99th birthday party wasn't just about him cutting a check, though. His equally famous son, Michael, was on hand to make a speech, which gave Kirk an opening for this fantastic line: "My son Michael is here, which just proves if you have enough money, you can have Michael Douglas speak at any event." Famous comedian Don Rickles was also there, but despite the presence of other stars, it was Kirk who reportedly left first, after just an hour. When you're 99 years old, you can get away with anything.