By Joseph Gibson on June 6, 2012 in Articles › Celebrity News

Kanye West has a lot of words on his business cards. Rapper, producer, man about town, maker of controversial statements, etc. And he's recently added "sneaker designer" to the list, with his upcoming Air Yeezy 2 sneakers. Designed by Kanye himself, the official price tag on a pair of the shoes is "just" $245. But that price is designated for the shoes that are set to fly off of store shelves on Saturday. A few lucky individuals have gotten their mitts on advance pairs, and the top price for one of those pairs as of this writing is a whopping 80 grand! 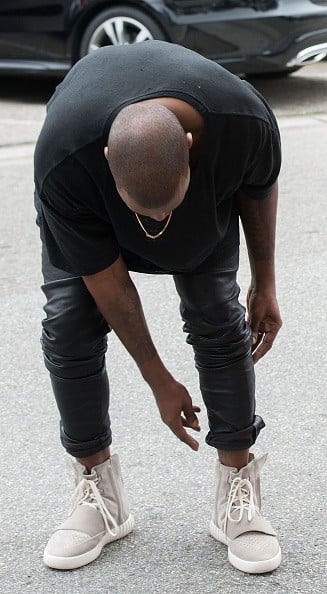 That figure my surprise you, but like practically everything Kanye touches these shoes are hotly anticipated. There are already reports coming in of eager footwear enthusiasts (or maybe just big Yeezy fans) camping out in front of Nike stores and other shoe stores to get their hands on a pair of these sneakers. Until recently, though, it was only Kanye himself who had been seen rocking the shoes around town (wearing sneakers that you yourself designed – somehow Kanye is able to pull this off).

But now, one lucky (and rich) has bid $89,100 for a pair of the shoes on eBay – probably close to being the most ever spent on a pair of sneakers. And really, the sky's the limit on how high that figure could reach.

There have been other instances of the general population going crazy for a pair of shoes. At the end of last year, Nike released a new edition of their famous Air Jordan sneakers, and in September of 2011 Nike (again) released a pair of replica Marty McFly sneakers from Back to the Future. To put these Kanye sneaks into perspective: That one-of-a-kind pair of sneakers sold for only $37,500 at a charity auction in Los Angeles, well under half what the Kanye shoes have already gotten.