If you're reading this article on a desktop computer, there's a very good chance that you are running some version of McAfee anti-virus software. Founded in 1987, McAfee is the world's largest anti-virus company. The company's founder and namesake is an eccentric gentleman named John McAfee.

We originally posted this article in March 2021 after McAfee after news broke that the United States Department of Justice came out with charges that the former software tycoon perpetuated a crypto currency pump and dump scam that resulted in several million worth of ill-gotten profits. At the time of the announcement, McAfee was sitting in a Spanish jail cell. The Department of Justice was requesting that Spain extradite McAfee to the US. Earlier today – June 23, 2021 – the Spanish government announced it had granted that extradition request. Tragically, John McAfee was found dead several hours later, apparently from suicide.

Why was the founder of the world's largest anti-virus company allegedly engaged in a relatively puny pump and dump scam? After all, Intel did acquire his company in August 2010 for $7.7 billion. John must have been an extremely wealthy guy, right? He must have been a multi-billionaire who rubbed elbows with fellow Silicon Valley tycoons like Elon Musk, Mark Zuckerberg and Larry Ellison, right?

Nope. John did have a large fortune at one point. Not in the billions, but in the hundred millions. Unfortunately a lavish lifestyle depleted his fortune to the point where by 2010 – when he was accused of murder – he was living a modest life in the tiny country of Belize. So how exactly did John McAfee's life go so so so wrong? Let's dig in… 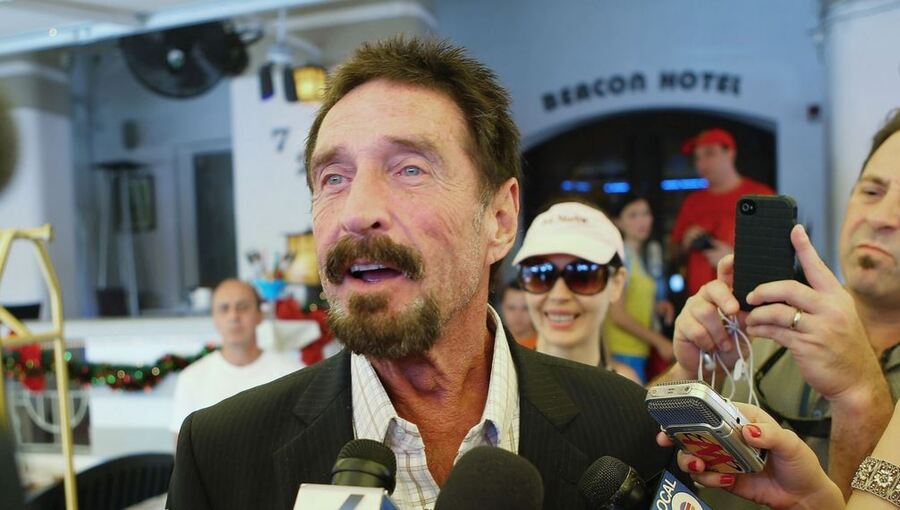 John McAfee founded his self-named software company in 1987. McAfee used what would later prove to be a brilliant strategy for gaining market share and establishing industry dominance. Unlike his contemporary competitors who sold software for $50 – $100, McAfee gave its product away for free. The company then charged for technical support and upgrades. This strategy blew away the competition and changed the software industry in general forever.

By the early 1990s McAfee had grown into the largest anti-virus company in the world.

Unfortunately, despite his soaring success, by 1994 John had grown bored of the company he founded. He stunned the business world when he suddenly stepped down as CEO and sold all of his shares for $100 million.

While $100 million is certainly an impressive windfall, McAfee's business continued to grow at an explosive pace, even after the dotcom bubble burst in the early 2000s. If John McAfee had held onto his shares until the 2010 $7.7 billion Intel acquisition, his stake would easily have made him a multi-billionaire overnight.

After leaving his company, McAfee went on a shopping spree. He purchased a five acre oceanfront mansion in Hawaii, a 10-person Cessna private jet, a 157 acre ranch in New Mexico that contained a 35-person movie theater, artwork and dozens of luxury cars. He also poured $25 million of his cash into building a 10,000 square foot, 280 acre, estate in Colorado which would be his primary home base.

To diversify his portfolio away from real estate, McAfee also purchased millions of dollars worth of Lehman Brothers bonds. After Lehman Brothers declared bankruptcy in October 2008, his investment became worthless and McAfee realized he was nearly out of cash. He was forced to sell as many assets as possible, at what might have been the worst time in history. His $25 million Colorado estate fetched just $5.7 million. The Hawaiian mansion was dumped for $1.5 million. When it was all said and done, John McAfee, who was once worth over $100 million and blew the chance to be worth several billion, was down to just $4 million.

Obviously $4 million is still a lot of money, but if you were once worth over $100 million and could have been worth a couple billion, it might be harder to take.

In 2009, McAfee relocated to Belize where $4 million would go a lot further. He purchased a waterfront bungalow compound and began dating a 17 year old local girl (the age of consent in Belize is 16).

McAfee's time in Belize was not exactly the paradise you might be imagining. After launching a new-age pharmaceutical company, local police began to suspect that the former dotcom king was actually manufacturing methamphetamine and an ultra potent strand of bath salts. When police raided his house in May 2012 they found dozens of guns and threw McAfee in jail for a night.

In November 2012, authorities in Belize announced that John McAfee was the prime suspect in the murder of a fellow expat named Gregory Faull. Faull was one of McAfee's neighbors.

McAfee professed his innocence when he was reached via cell phone for comment. He claimed that the he was being set up by the Prime Minister and police of Belize:

"They've been trying to get me for months. They want to silence me. I am not well liked by the prime minister. I am just a thorn in everybody's side. They mistook him [Gregory Faull] for me. They got the wrong house. He's dead. They killed him."

John initially fled to Guatemala. His location was given away after giving an interview with Vice. The Vice photographer forgot to remove the photo's location info from the metadata. He was arrested by Guatemalan police for several weeks before being deported to the United States.

John lived relatively free in the United States until January 2019 when he was once again on the run, this time from US authorities, after learning the was about to be charged with tax evasion.

A few months later John and some friends were arrested while his yacht was docked at a port in the Dominican Republic. Dominican police were suspicious that the revelers also were transporting weapons. They were held for four days.

On October 5, 2020 John was arrested in Spain. Spanish authorities were acting at the request of the United States Department of Justice which at that point claimed John failed to pay taxes on millions in alleged income earned between 2014 to 2018. He reportedly did not file a tax return in any of those years.

The day after this arrest, the US Securities and Exchange Commission filed a complaint that alleged McAfee earned $23 million in digital assets promoting Initial Coin Offerings (ICO) without disclosing that he was an investor in those ICOs.

On March 5, 2021 the US Attorney's Office for the Southern District of New York formally indicted John and a partner for allegedly promoting cryptocurrencies over Twitter without disclosing that they were secretly investors. The currencies rose in value soon after Tweets were published McAfee's account, where he has hundreds of thousands of followers. McAfee and the partner allegedly sold their stakes for a profit as the currency values rose. If true, a fairly textbook "pump and dump" scheme.

US authorities were seeking his extradition from Spain. He faced 60 years behind bars if convicted.

As we mentioned earlier in this article, on the morning on June 23, 2021, Spanish authorities announced their intention to comply with the extradition request. John was found dead of an apparent suicide several hours later. He was 75.