We all know what happened on Sunday night between Will Smith and Chris Rock. I'm not going to recap it. I will however give my personal opinion on the incident: I think it was psychotic. Will Smith should have been arrested on the spot. If the Academy had an ounce of integrity his Oscar would be rescinded and he would be banned from attending all awards shows for the rest of his life.

And judging by the comments he just gave to CBS's Gayle King, it sounds llike Jim Carrey shares my views. Actually he takes it a step further:

"I was sickened by the standing ovation. I felt like Hollywood is just spineless en masse… You do not have the right to … smack somebody in the face because they said words…I'd have announced this morning that I was suing Will for $200 million. That video is gonna be there forever. It's gonna be ubiquitous. You know, that insult is gonna last a very long time."

I think Jim has a point. For example, I just searched Getty Images for "Chris Rock" to find a photo to accompany this article. Normally the most popular photos of a celebrity on Getty Images are basic head shots and red carpet poses from a few years ago. They've become "most popular" because they have been used over and over by a million publications. Well, as of today out of the top 15 photo results for "Chris Rock," 10 are different angles and points from the slap. For example: 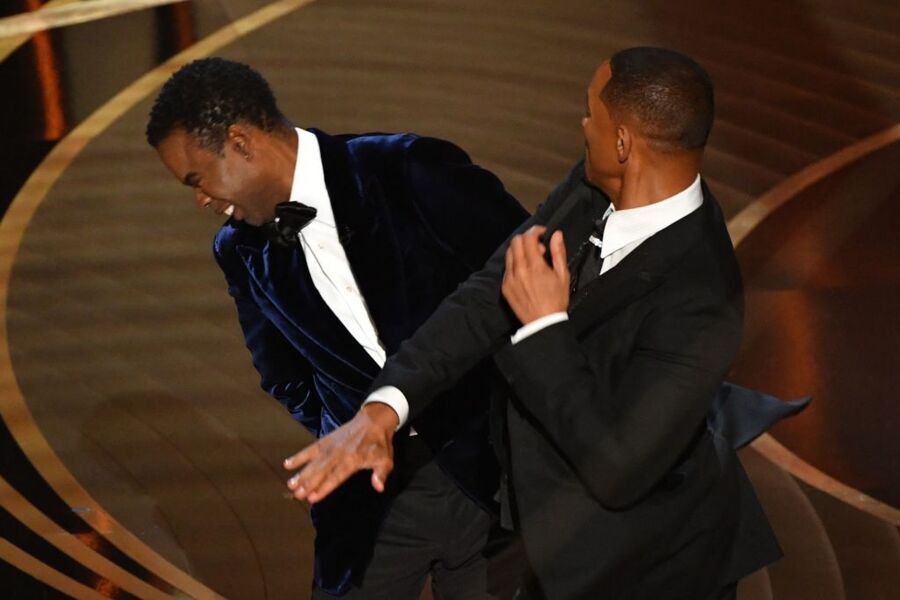 When I search Getty for "Will Smith," two of his top 10 results are various versions of the above photo.

That's after both men have had multi-decade careers where they have attended countless red carpets and other photo-heavy press events.

Over on YouTube, one of the featured videos on the homepage for the last day has been an uncensored version of the slap posted by The Guardian. That video now has 75 million views. Various other versions, not including The Guardian's, collectively have been over 100 million times on YouTube. The slap has probably been viewed over a billion times on YouTube in 24 hours. For context, the fastest single-video to reach 1 billion views on YouTube is Adele's "Hello." It took Adele 87.4 days to reach 1 billion views.

After just a quick search of Twitter I found just a handful of versions that collectively have over 100 million views. I would wager there's been another 1 billion separate views on Twitter.

That's 2 billion views in 24 hours on two platforms without including versions posted to Instagram, Facebook, TikTok or the countless times it's been played on news stations. The slap was easily 20% of the content on "The Today Show" on Monday AND Tuesday. Forget COVID's resurgence, climate change, the WAR IN UKRAINE… Chris Rock getting slapped is the most popular news story on the planet right now.

There is now a dedicated paragraph on both Will Smith and Chris Rock's respective wiki pages AND there's a separate dedicated 1,300-word wiki article titled "Will Smith–Chris Rock Oscars altercation."

It will be a decade before Chris Rock will be able to give an interview or walk down the street without being asked about the slap. No matter how many times he tells friends, family and audiences to not ask about, they will ask about it or yell out references to it. I also think his career will suffer somewhat. Maybe not. Chris did handle it really well, but you can't deny that he was totally emasculated by the slap and then by ALL OF HOLLYWOOD basically saying "who cares, he did acting good, let's give him a statue and uproariously applaud him" 20 minutes later!

I just finished watching the amazing "Pam & Tommy" limited series on Hulu. Check it out. Without spoiling anything, Pam & Tommy Lee's infamous honeymoon home video almost single-handedly ruined their marriage and significantly derailed Pamela Anderson's career. Not to mention the emotional turmoil they went through from the sheer embarrassment of it all. Is an extremely intimate home video being leaked and viewed a billion times as embarrassing as being slapped and emasculated in front of the whole world? Maybe not exactly the same, but I would argue it's in the ballpark.

Bottom line, one could make the argument that this assault will materially impact Chris Rock's mental health and earning potential for the rest of his life. Therefore, I think Jim Carrey has a point and Will Smith should literally pay a big price for his actions.