The Honest Company finally made its debut as a public company on Wednesday. The IPO was a victory lap in what has been a rocky decade since the consumer goods company was co-founded in 2011 by a group of entrepreneurs led by actress Jessica Alba. And with the IPO, Jessica is officially worth a small fortune. While it's not quite the fortune she was once predicted to make, it's a very impressive sum nonetheless.

Jessica was inspired to create The Honest Company after the birth of her first child in 2008. At the time, her mother innocently recommended a laundry detergent she believed to be baby friendly. As the story goes, the detergent resulted in Jessica breaking out in a rash (I'm not sure how the baby was impacted).

Jessica set out to create a line of baby products free of synthetic fragrances and synthetic chemicals.

In 2011, she partnered with a team of co-founders that included Brian Lee (who co-founded ShoeDazzle.com and LegalZoom.com) and environmental health advocate, Christopher Gavigan (who also happens to be married to Steven Spielberg's stepdaughter, Jessica Capshaw).

In March 2012, The Honest Company raised $27 million in Series A venture Capital. In November 2012, the brand officially launched with a line of 17 products. The company would go on to generate $12 million in revenue in its first year. An impressive feat!

They ended 2013 having generated $50 million in revenue and raising an additional $25 million in VC money.

In August 2014, the company first hit a $1 billion private valuation when it raised $70 million in a Series C funding round.

Exactly one year later, the company raised $100 million at a $1.7 billion valuation.

At this point, it was widely believed that Jessica still owned 20% of the company's shares. That meant her stake was worth $340 million on paper in August 2015.

That's when the road got a little rocky.

In May 2017, reports surfaced that some of the company's baby wipes had grown mold spots by the time they reached customers. The company was quick to apologize and correct the problem.

Around this time they also faced a class-action lawsuit from customers who claimed that more than 20 of the company's products were deceptively labeled to "exploit consumers' interest in natural or higher quality products." Labels which claimed products were "natural" may have allegedly contained "a spectacular array of synthetic and toxic ingredients" (as claimed by one of the   plaintiffs). The company eventually paid millions to settle and correct the lawsuit issues.

These controversies were devastating to The Honest Co's reputation and bottom line.

The controversies also reportedly scared off several potential acquirers who thought the company's asking price of $2+ billion was too much. It was reported that Unilever had been interested at one point, but instead opted to acquire Honest Company's rival, Seventh Generation, for $600 million. The lesson here is that sometimes it pays to simply be the cheaper option in the same category. 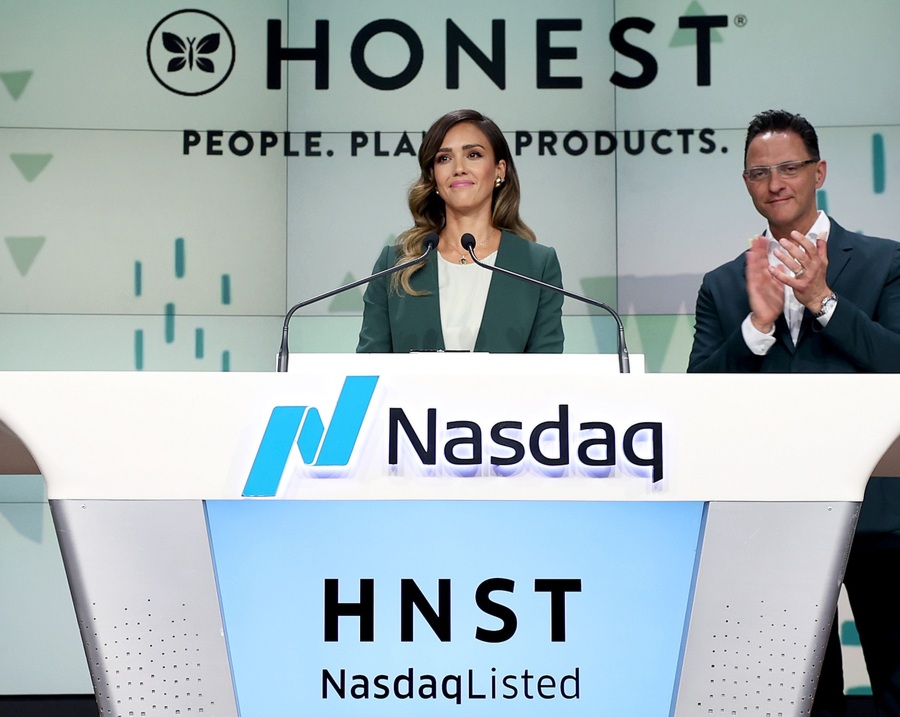 All the while, early investors were desperate for the company to go public or get bought so they could cash out. Unfortunately, the IPO market for a six-year-old consumer packaged goods company with some very recent, very damaging black eyes, proved to be cold.

Turns out, maybe the company just needed some time to right the ship.

As we mentioned previously, today The Honest Company went public. And so far, it was a very successful debut. The company's bankers had been predicting a debut price of $16. It actually debuted at $21 and ended the day at $23.

At $23 a share, the company has achieved a public market valuation of $2.7 billion.

How Did Jessica Alba Make Out?

Recently released SEC filings show that Jessica owns 5.65 million shares of The Honest Co. (which includes options that have not yet been officially earned, but very likely will be).

Jessica's 5.65 million shares represent just 4.8% of the company's total outstanding. That's down from what most believed was a 20% stake at the end of 2015. Those down rounds are painful!

$130 million is an impressive sum, but it's also 60% less than what Jessica's stake was believed to be worth a few years back. It's very possible that the stock continues to rise and her stake gets back up to the $300-400 million range, but in the meantime the company intends to do whatever it takes to keep her happy. They admit this point clearly in their prospectus!

SEC filings also show that Jessica is set to earn a one-time $2.6 million dividend for successfully steering the company to an IPO. She will also earn a $700,000 base salary for staying with the company. In its IPO prospectus, the company said:

"We believe that the success of our brand depends in part on our ongoing affiliation with Jessica Alba… The loss of the services of Ms. Alba or the loss of our ability to use Ms. Alba's likeness could have an adverse effect on our business, financial condition, results of operations and prospects."

Congrats to Jessica and The Honest Company on a well-deserved IPO!