By Brian Warner on October 30, 2016 in Articles › Celebrity News

Being the only son of international movie star Jackie Chan clearly comes with many privileges and advantages. Jackie Chan's only child, a 33 year old son named Jaycee, lived a life filled with opulent mansions, luxurious vacations, expensive cars, the best education and much more. Jaycee was even been able to launch his very own singing and acting career thanks to his famous father. But there is one important thing that Jaycee will not receive from his father: Hundreds of millions of dollars. Why? Because when Jackie Chan dies, he intends to leave 100% of his $350 million fortune to charity, purposely leaving Jaycee out entirely…

While accepting an award in Beijing back in 2012, Jackie was asked if Jaycee will inherit his massive fortune some day. Jackie stated that he was originally intending to donate half of his wealth to charity and leaving his family the other half but recently changed his will to leave 100% for charitable causes throughout the world. The elder Chan explained: "If he is capable, he can make his own money. If he is not, then he will just be wasting my money." Jackie also expressed regret for not sending Jaycee to the army where his son would have received "life experience and character." 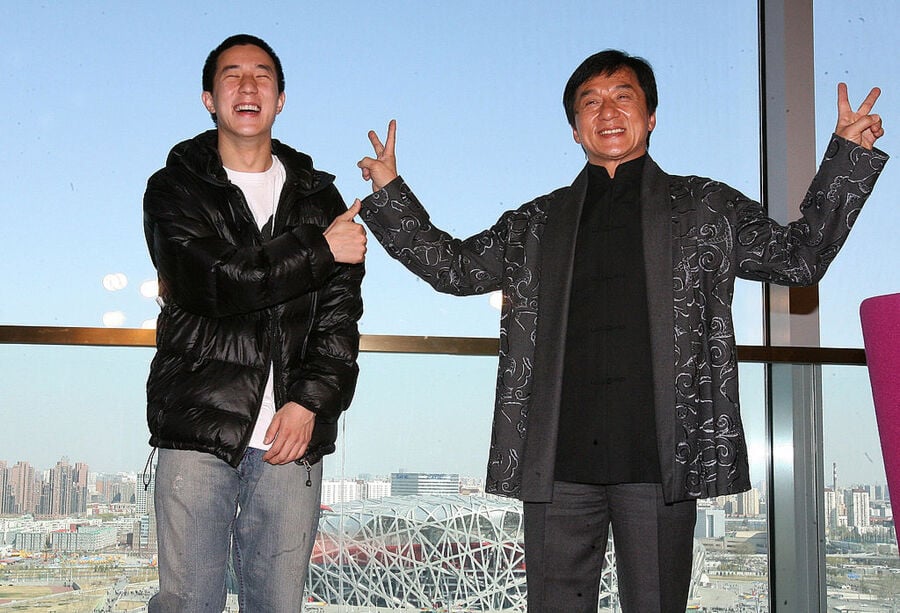 If Jaycee wants to continue living an extravagant lifestyle, his career is going to need a boost. Since 2004 Jaycee has appeared in around 20 films, most of which have been major flops. Jaycee's 2012 movie "Double Trouble" became one of the biggest box office failures in history grossing just $9000 at the box office, despite heavy marketing and promotion. He also starred alongside his father in 2010's "1911" which became Jackie's worst performing movie ever.

And then there are the legal problems. In August 2014, Jaycee was arrested in Beijing on drug possession charges. Police then found 3 ounces of marijuana in the actor's apartment. Chan theoretically could have faced life imprisonment for "hosting others to consume drugs". Jackie was forced to step in and make a public apology on behalf of his son. Jaycee also made a public apology. He was incarcerated for 148 days before being sentenced to six months in prison. His father refused to use any political connections to help his son out.

Jackie Chan is not the only celebrity who plans on giving their fortune to charity instead of their children. Warren Buffett, Bill Gates and Ebay founder Pierre Omidyar are some of the more notable billionaires who have pledged their entire fortunes to charity. Buffett is an especially staunch opponent of what he calls "dynastic wealth" (wealth that is so vast it creates generational dynasties). Buffett refers to anyone who grew up wealthy as a "member of the lucky sperm club" and, like Jackie Chan, firmly believes that if his children work hard enough they can achieve great success the same way he did.