Did You Kow That In-N-Out Burger Is Owned By A 30 Year Old Female Billionaire Drag Racer?

Anyone who lives on or has visited the West Coast has likely enjoyed an In-N-Out burger. For those of you who have not experienced that privilege, imagine the best burger you've ever tasted then multiply it by 100. In-N-Out was founded in 1948 by Harry and Esther Snyder and 65 years later it is still a privately owned family company with 281 locations and $625 million in annual revenues. Perhaps more intriguing is the fact that due to a series of unfortunate family accidents, today In-N-Out burger is 100% owned by Lynsi Torres, the 30 year old granddaughter of Esther and Harry. Lynsi, who is extremely secretive, has a passion for professional drag racing, lives in a $17.4 million mansion… And, more importantly, happens to be the youngest female billionaire in America. The story of how she came to be the billionaire owner of In-N-Out is fascinating…

First of all, I haven't eaten yet and it was physically painful to search google images just now for In-N-Out burger photos. But on to the story… In-N-Out was founded in 1948 by Harry and Esther Snyder in Baldwin Park, California. They were the first drive-through fast food restaurant that enabled customers to place their orders via two-way speakers. The Snyders motto was to "Give customers the freshest, highest quality foods you can buy and provide them with friendly service in a sparkling clean environment". Anyone who steps into one of their restaurants will see that motto is till alive today. Throughout the 50s and 60s, In-N-Out was a small local burger chain with only 18 locations. 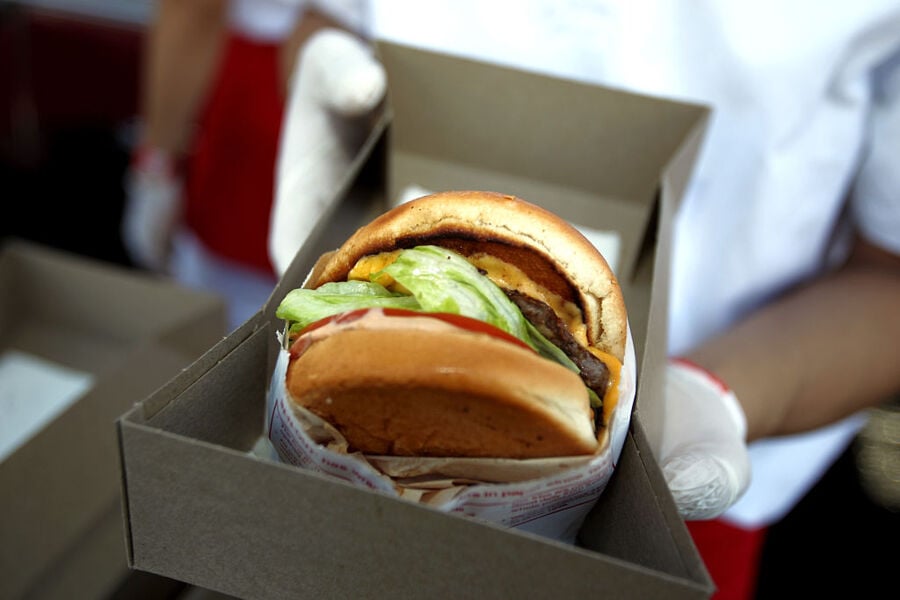 In 1976, founder Harry Snyder died at the age of 67 and left control of the company with his 24 year old first born son Rich. Rich spent the next twenty years expanding the chain throughout the West Coast. Rich increased the number of locations from 18 to 90 before he died in a plane crash in 1993. After Rich's death, the company passed to Rich's younger brother Harry Guy Snyder (Lynsi's father), commonly known as Guy. Guy Snyder continued to expand the company aggressively into Arizona, Nevada, Utah and Texas. Guy would eventually grow the company from 90 locations to 140 before he died in 1999 of an accidental prescription drug overdose when Lynsi was just 17 years old. At this point, Esther Snyder, the matriarch of the family, re-took the reigns of In-N-Out until her death in 2006 which left 24 year old Lynsi as the sole heir. Lynsi was not yet ready to be the president of a major fast food corporation so her brother-in-law Mark Taylor took control of the day-to-day operations through 2010.

On May 5th 2012, Lynsi turned 30 and officially inherited half of all the private ownership shares of In-N-Out burger. She will receive the second half on her 35th birthday, at which point she has the option to sell the chain, expand it further or do nothing at all. Today Lynsi's empire includes 281 locations that generate $625 million in annual revenues. The company is still private, but is conservatively valued at between $1 and $3 billion! And keep in mind, In-N-Out still only has 281 locations compared to McDonald's which has 34,000 restaurants worldwide. Imagine what could happen if Lynsi follows the path of her late uncle and father by expanding even more aggressively throughout The United States. Or maybe she'll keep it local to retain In-N-Out's famous allure. Lynsi is extremely secretive. She has never given a public interview and has rarely been photographed. She has a passion for professional drag racing and competes in the National Hot Rod Association. When she competes, she drives either a 1970 Plymouth Barracuda or a 1984 Chevy Camaro. Here are two of the only known photos of Lynsi:

Lynsi has been married three times. Once to Richard Martinez, with whom she shares two children. Before Richard she was briefly married to her high school sweetheart Jeremiah Seawell. Today Lynsi is married to a contractor named Val Torres Jr who also is passionate about drag racing. They live with her children and Val's daughters from an earlier marriage, in a palatial $17.4 million mansion in Bradbury, California which she bought from former baseball player Adrian Beltre. The house is 16,600 square feet and has seven bedrooms, 16 bathrooms, batting cage, tennis court, basketball court and much much more.

It must be nice to be the billionaire heiress to a fast food fortune! I bet she even gets all the free Double Doubles she wants.