As the 29th pick of the 2004 NBA draft, David Harrison was selected by the Pacers to be a solid cog off the bench. After all, this was an Indiana team that reached the conference finals last year, and had serious title aspirations. Instead, the seven-footer found himself fighting amongst Detroit fans, a member of the infamous "Malice at the Palace" brawl. Harrison allegedly punched a 67-year-old fan, and while Ron Artest (his name at the time) received the biggest suspension for going into the stands, Harrison still received some penalties: one year of probation, 60 hours of community service, a $250 fine and anger management counseling. Add that to the $85,000 he paid in lawyer fees, plus the trauma of being punched, kicked, and having a chair thrown at him by Pistons fans, and it was a pretty brutal experience for Harrison.

Turns out, that's hardly been the worst thing Harrison has gone through.

The former All-American spent four years in the NBA, averaging 5 points and 2.9 rebounds while making a total of $4.4 million. Almost all of that money is gone. Harrison even briefly took a job at McDonald's in 2013 to try and provide for his family. How did Harrison go from McDonald's All-American to simply working at McDonald's? 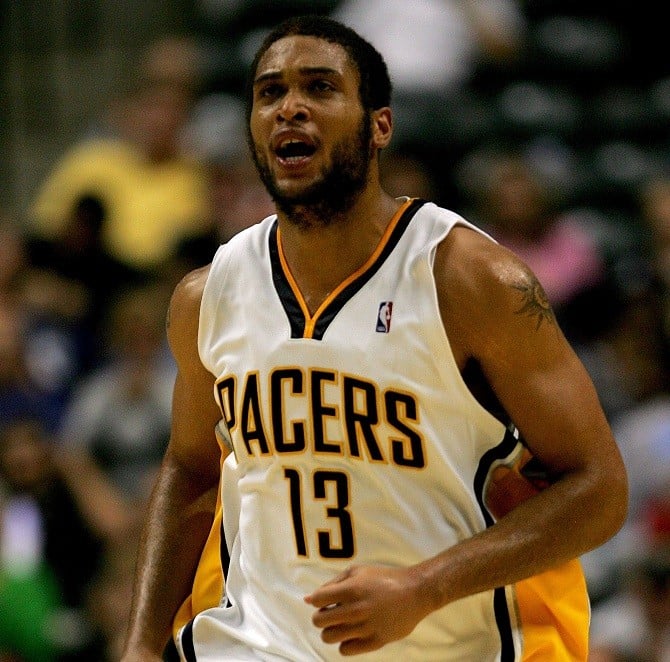 Things started unraveling during his final year in Indiana, the team fired coach Rick Carlisle, and brought on Jim O'Brien. He and Harrison butted heads throughout the latter's final year on the team, and Harrison claims he smoked pot every day to avoid getting too angry with his coach. His frequent smoking habit became a problem, and he was suspended five games for violating the league's drug policy. After becoming a free agent in 2008, Harrison never played in the NBA again. He did spend three years playing in China, and appeared in a handful of games for the Reno Bighorns. But he just couldn't latch on to an NBA roster.

However, with a large family to take care of, he kept spending money, even though he didn't really have an income. His car was nearly taken away, and his house went into foreclosure. Harrison, who attended the University of Colorado, is 16 hours away from graduating, but can't afford to go back to school. He's looked into graduate assistant gigs, and tried to get a job at financial services firm Edward Jones, though they've all returned the same thing: nothing.

Finally, in 2013, his credit card was declined when he tried to buy a Happy Meal for his son. The manager, who recognized him as a former NBA baller, offered him not just the meal for free, but to get him a job at another McDonald's.

Harrison took the job, but it was short-lived. Fans would recognize him; non-fans would marvel over his height. He became such a distraction that people would sometimes take close to an hour to order, just trying to chat with the former player. Realizing the job wasn't a good fit for him, Harrison left after only two weeks.

Though he has made a little bit of money trading stocks, Harrison is still strapped for cash. He admits his basketball window has probably closed. But he's not giving up on trying to support his family, something that continues to drive him. Hopefully he gets there, though for the time being, he's just another all too common cautionary tale of an NBA player not being careful with his finances.