By now you hopefully know the story of how one brilliant decision in 1973 allowed George Lucas to become a multi-billionaire from the smash hit Star Wars franchise. Long story short, instead of accepting the $500 thousand dollar director's fee he was entitled to, Lucas agreed to film the movie for $150,000. In exchange, he negotiated the right to own 100% of all Star Wars merchandise and any future sequels. Considering that the Star Wars empire (pun intended) eventually went on to earn $27 billion worldwide from sequels, licensing and merchandise, it's easy call that original agreement the best deal in the history of Hollywood.

But as crazy as this sounds, Star Wars didn't always seem like a such a sure bet. In fact, production of the the first Star Wars movie was such a disaster that at one especially dark point, a hopeless George Lucas went to his good buddy Steven Spielberg for help. What transpired next would would turn out to be one of the greatest bets ever made in history. A bet that, still to this day, earns Spielberg millions upon millions of dollars for a movie he had absolutely nothing to do with. 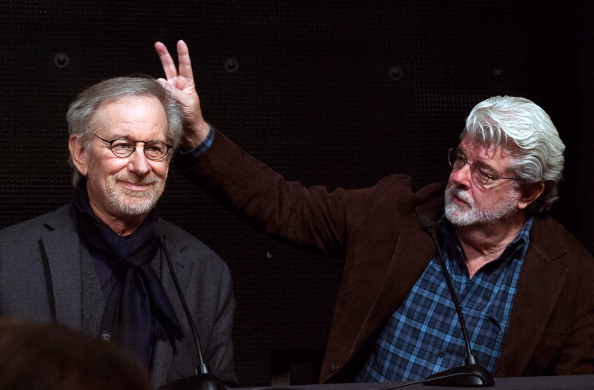 The Star Wars empire of merchandise, movies and licensing deals have earned a whopping $27 billion to date. Every year, Star Wars sells $3 billion worth of toys alone. The first film would eventually become the second highest grossing movie of all time (behind Avatar) when you adjust for inflation, earning more than $2.5 billion off a budget of $11 million. Given these impressive stats, hindsight would make it easy to assume that the actual production of Star Wars was this magical experience that was destined for glory from conception to completion. In reality, the exact opposite is true.

Right from the get go, Star Wars seemed destined for failure. After just one week of filming on location in the deserts of Tunisia, Lucas was already well behind his original production schedule thanks to several on set problems and breakdowns. First of all, Tunusia is supposed to be a dry desert 80% of the year, yet somehow the set was devastated by a rare April rain storm during the first week of photography. Secondly, throughout the entire production, the film continuously suffered from a variety of malfunctioning electronics, broken props and crew injuries. Eventually the production moved to a studio in England where the British crew had little interest in making what they considered a dumb children's movie. Nearly every actor involved in the project, including Harrison Ford, was convinced that Star Wars would a complete and utter failure.

Furthermore, Lucas clashed with the film's editors, costume designers, studio executives and technical advisors over nearly all of the post-production elements to the movie. He was so disgusted by one of the final cuts, that the movie's official release date had to be delayed from Christmas 1976 to summer 1977 which caused the budget to swell 40%. George was close to having a nervous breakdown over the fact that the final version of the movie was not living up to his original vision. To make matters worse, the star of the film, Mark Hamill was involved in a serious car accident that scarred his face so badly that all re-shoots were impossible.

Throughout the entire process, George often appeared severely depressed and was even diagnosed with hypertension from all the stress. Interestingly, several of the Fox executives actually loved what started to come together towards the middle of 1977. One Fox exec told Lucas that Star Wars was going to be "the biggest hit ever made". To which George replied "Oh, no. It won't make more than $15 million."

At the peak of his post production depression, George decided to take a weekend trip to the Mobile, Alabama set of Steven Spielberg's film "Close Encounters of the Third Kind". The weekend was meant to clear his head and help him regain some confidence, unfortunately the visit had the exact opposite effect. In Spielberg's own words:

"George came back from Star Wars a nervous wreck. He didn't feel Star Wars came up to the vision he initially had. He felt he had just made this little kids' movie. He came to Mobile, Alabama where I was shooting Close Encounters on this humongous set and hung out with me for a couple of days. He said, 'Oh my God, your movie is going to be so much more successful than Star Wars. This is gonna be the biggest hit of all time'."

At this point, a very desperate George Lucas made a fateful bet. Again, in Spielberg's own words:

So who ended up on top in this bet? Close Encounters was a big hit in it's own right, going on to earn $300 million. But as we mentioned above, that's doesn't even scratch the surface of the overwhelming success of Star Wars. By the end of 1978, Star Wars' worldwide box office receipts totaled $500 million, which earned Spielberg roughly $12.5 million. That's equal to $46.675 million in inflation adjusted dollars. Even 30 years later, that fateful bet is still putting millions of dollars into Steven Spielberg's bank account. One final time, in his own words:

"Close Encounters made so much money and rescued Columbia from bankruptcy. It was the most money I ever made, but it was a meager success story. Star Wars was a phenomenon and I was the happy beneficiary of a couple of points from that movie which I am still seeing money on today."

What's the lesson here? Maybe it's as simple as always supporting your friends in their time of need. You never know how karma might come back in your favor!