By Brian Warner on March 9, 2014 in Articles › Celebrity News

Most hardcore rock fans will probably agree that the original David Lee Roth version of Van Halen is better than the Sammy Hagar era. "Diamond" Dave fronted Van Halen from the band's inception in 1978 up to his departure in April 1985. Three months later, after getting a tip from his mechanic, Eddie Van Halen hired "Red Rocker" Sammy Hagar to replace Roth. Van Hagar lasted from 1985-1996 when Sammy and Eddie had a nasty falling out. Tensions have been high ever since. In terms of record sales, Roth outsold Sammy nearly 2:1, 56 million compared to 27 million. On the other hand, all four of Sammy's albums debuted at #1 on the Billboard chart, much higher than any of the previous Roth releases. And, for better or worse, the Van Hagar era was much more commercially profitable for the band members thanks to a series of extremely successful international tours and licensing deals. If you're one of these Van Halen die hards who still doesn't respect Sammy Hagar, you should at least give him some credit as an unlikely business titan. The story of how Sammy Hagar built an empire and made a fortune off his Cabo Wabo clubs and tequila brand is impressive and astounding!

Sammy Hagar began visiting Cabo San Lucas, Mexico well before he joined Van Halen. Since the early 70s, when Sammy was a solo singer and the front man for the band Montrose, he found refuge basking on Cabo's sunny beaches. In 1990, at the peak of his Van Halen career, Sammy convinced his band mates to partner with him in opening a bar/restaurant in Cabo that also had large performance stage for visiting bands. Unfortunately, that first year was a mismanaged financial disaster. It was so bad that Sammy bought his band mates out in embarrassment. After a few early speed bumps, the newly named "Hagar's Cabo Wabo Cantina" eventually became a huge hit for tourists and locals. The name "Cabo Wabo" is a play on the saying "Cabo wobble" which describes the awkward walk that heavy tequila drinkers make after a hard night partying.

As you may know, Mexico is famous for its tequila. So much so, that the Mexican government even goes so far as to protect and sanction the cultivation of the agave plant. In 1996 Sammy began to seek out a partner who could make a house tequila for his patrons. He eventually connected with the Riviera family of Guadalajara who have been making Tequila for over 80 years. This is how Cabo Wabo Tequila was born. By 1999 the Tequila came in four different flavors and was being distributed in the US by a Napa Valley based wine importer. Cabo Wabo Tequila was an instant hit on American liquor shelves, selling nearly 40,000 cases in its first year alone. By 2006, the company was selling 150,000 cases per year and generated $60 million in revenue. Cabo Wabo is the second best selling premium tequila in the U.S., behind Jose Cuervo. 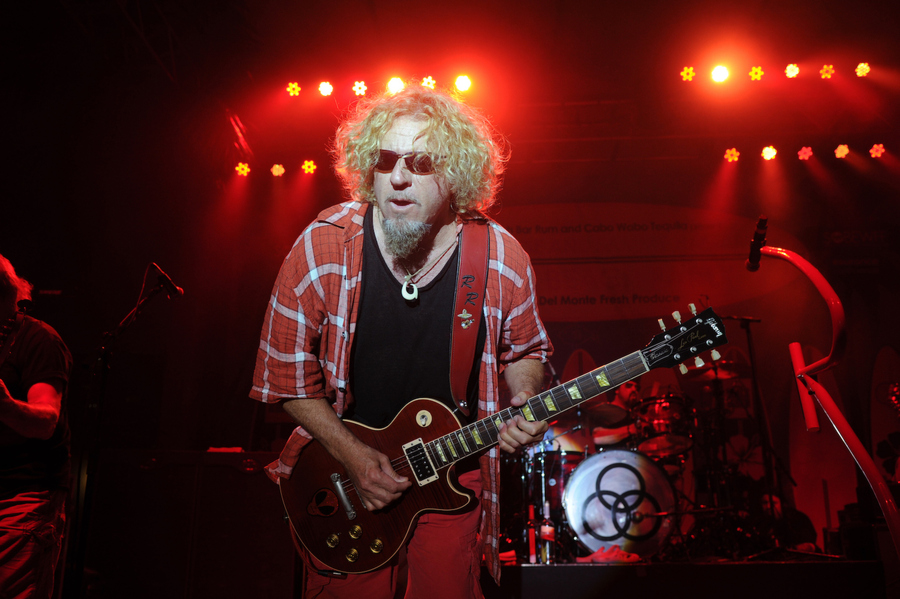 While Cabo Wabo Tequila was a huge hit in the U.S., it was still unavailable internationally, so in 2007 Sammy began seeking a new distribution partner. In his own words at the time: "If you have a hit you need distribution. You can approach distributors in each country or you can go to Warner Bros or Universal or the other big boys so the world can hear your hit." In May of 2007, Hagar struck a deal with the Italian beverage company Gruppo Campari to sell 80% of his Cabo Wabo Tequila company for a whopping $80 million! Three years later, Campari paid Hagar a $4 million earn-out bonus and bought the remaining 20% of the company for $11 million, bringing his total take from the deal to $94 million.

As if this wasn't enough, while Cabo Wabo Tequila was exploding on the market and making Sammy a centimillionaire, he simultaneously began expanding his empire. In addition to the original Cabo San Lucas location, today there is a Cabo Wabo in Lake Tahoe and another on the Las Vegas Strip. In 2009, Hagar launched "Sammy's Beach Bar & Grill", with locations at Harrah's Casino St. Louis and inside the Southwest terminal of the Las Vegas Airport. 100% of the profits from these two businesses are donated to charity. Furthermore, he opened "Sammy's Rockin Island Bar & Grill" in Roseville, California in September 2012. Finally, in 2011, Hagar announced the launch of a new liquor brand called "Sammy's Beach Bar Rum". Do you think the Red Rocker can capture lightning in a bottle twice?

In conclusion, Sammy Hagar may not be everyone's favorite Van Halen lead singer but he's definitely the richest. In fact, as of March 2013, Sammy's $120 million net worth far outweighs every other current and former Van Halen member. Eddie comes in at #2 with $85 million, Alex is #3 with $75 million, Michael Anthony is #4 with $60 million and David Lee Roth is last with a net worth of $40 million.