In the late 90s and early 2000s, hip hop entrepreneur Damon Dash was on top of the world. At the time, Dash was the CEO of the hottest rap label in music, Roc-A-Fella Records, with powerhouse roster artists like Jay-Z, Kanye West, Memphis Bleek, Beanie Sigel, DJ Clue and Juelz Santana. Dash was also the CEO of the wildly successful Rocawear clothing line which was reportedly generating annual revenues of $350 – $450 million. As if this wasn't enough, Dash was testing the waters in Hollywood by executive producing the critically acclaimed 2004 Kevin Bacon film "The Woodsman". Perhaps most importantly, without Dash, the world would likely never have heard the name Jay-Z at all. With the above resume, you'd have to assume that today Damon Dash must be worth hundreds of millions of dollars and is presiding over a dynasty that rivals Russell Simmons, Diddy or Dr. Dre, right? Unfortunately that is not the case. Today Damon Dash is not only broke, but he owes millions of dollars to the IRS and has had several properties seized through foreclosure. How did this happen? The story of how Damon Dash launched Jay-Z's career and Roc-A-Fella Records then blew through a reported $50 million fortune is a sad and shocking cautionary tale.

After getting expelled from three different high schools, Damon Dash fell into a bad crowd and began selling drugs. Dealing earned him plenty of cash but it came with a price. Damon quit the drug game after seeing too many friends end up dead. Thankfully, Damon quickly discovered that he was a born promoter. He and a group of friends launched a mini business throwing parties and promoting clubs. One night, he announced that the first 100 girls in line at a club opening would get free bottles of Moet Chandon champagne. A line around the block formed hours before the doors even opened, and while Damon actually lost money on the promotion, he solidified his reputation as the hottest promoter in New York. Soon Damon decided he could be just as successful promoting musical acts as he was clubs. Through his cousin's step father, Damon landed his first management client, a rap group called Future Sound. Not long after, Dash had arranged for Future Sound to sign a deal with Atlantic Records under an executive named Rodolfo Franklin. In addition to being a record executive, Franklin moonlighted as a DJ under the name "DJ Clark Kent". It was Rodolfo who, in 1994, first alerted Dash to an ambitious former drug dealer from Brooklyn who was looking to launch a rap career. That rapper's name was Sean Carter, soon to be known as Jay-Z. Jay-Z was unlike anyone else in rap at the time. He was the fastest rapper Damon had ever heard and he didn't write anything down, instead reciting every rhyme straight from memory. Furthermore, like most popular artists of the day like DMX, Snoop Dogg, Notorious B.I.G. and Tupac, Jay-Z didn't rap about murder and crime. Jay-Z's lyrics tended to focus mainly on living a lavish Playboy lifestyle filled with girls, money, boats, cars and champagne. Bling Bling!

At the time, Jay-Z was a bit of an underdog in the music industry. He had tried and failed for years to secure his own record deal but was rejected for being too old or not appearing hard enough. Jay didn't fit the mold of fellow typical Brooklyn rappers who wore gold teeth and sang exclusively about dealing drugs and killing people. With Jay-Z as his partner, Damon Dash founded Roc-A-Fella records. The name was a play on oil tycoon John D. Rockefeller, the richest American of all time who died with an inflation adjusted net worth of $340 billion. The name was also a nod to a famous Brooklyn drug dealer named Rocafella who Jay-Z idolized as a young hustler. That Rocafella is the one who died of AIDS and is immortalized in the NAS song "Ether" ("Rocafella died of AIDS, that was the end of his chapter And that's the guy y'all chose to name your company after?").

Damon wanted Jay to film a music video as fast as possible but there was just one problem. Roc-A-Fella Records had no money. To raise cash, Damon sought an investment from a well connected street hustler named Kareem "Biggs" Burke. Damon took 100% of Burke's $16,000 investment and poured it into producing a music video for Jay's song "In My Lifetime" on the Caribbean island of St. Thomas. Burke also arranged for Jay and Damon to have access to a wealthy local kingpin's mansion and speed boat for the video:

The gamble paid off and soon Roc-A-Fella record's only artist was getting courted by all the major record companies. Unfortunately, none of the major labels would agree to one of Damon's outrageous demands. Damon Dash demanded that Roc-A-Fella would maintain ownership of Jay-Z's master recordings. Owning the master would turn out to be a brilliant financial decision as Jay-Z's back catalogue still sells millions of units, even almost 20 years later. Only one record company was willing to acquiesce to such insane demands, a little known label called Freeze Records. As fate would have it, shortly after signing Jay-Z, Freeze Records was sold for scraps to Russell Simmons and Lyor Cohen's Def Jam Records after experiencing severe financial setbacks.

Roc-A-Fella Records Rises To The Top 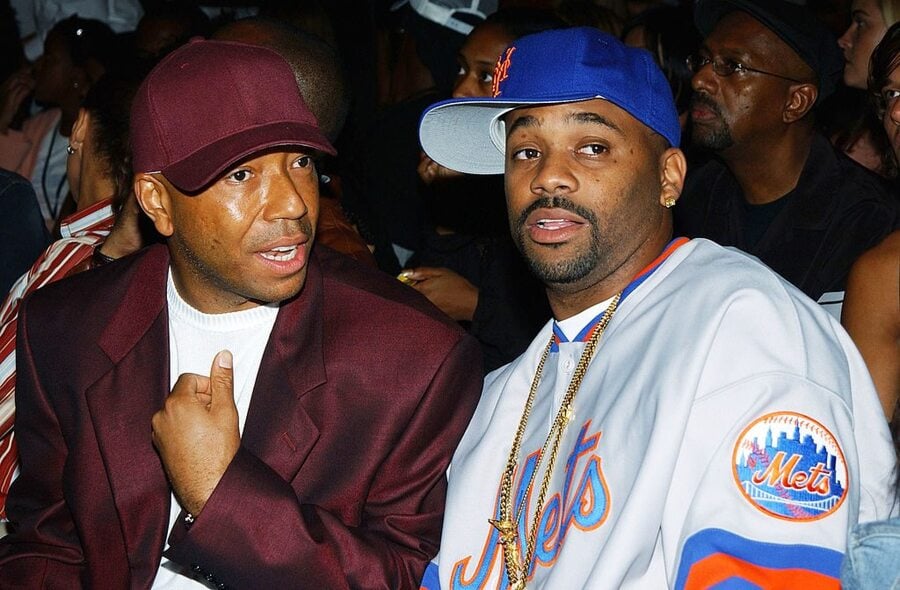 The Downfall Of Damon Dash

Between 2002 and 2004 Damon Dash went on a tear starting companies, signing new artists and generally living the life of a super successful hip hop mogul. He had amassed an army of mega-talented future stars like Kanye West, Cam'ron and Beanie Sigel. Roc-A-Fella had survived the 9/11 attacks (which happened the same day Jay's album "The Blueprint" debuted), Jay-Z's arrest on assault charges and the tragic death of Dash's girlfriend Aaliyah. Rocawear had expanded to five different clothing and shoe lines and was bringing in $350 – $450 million per year in annual sales. Damon was even producing movies like the critically acclaimed Kevin Bacon film "The Woodsman".

Fittingly, Dash lived a very opulent life that reportedly included butlers, private chefs, bodyguards, a mansion in Beverly Hills, a Tribeca loft, a $35,000 per month London apartment and a $400,000 Maybach. Dash was also famous for only wearing his shoes, socks, jeans and shirts once, before tossing them away. Unfortunately, all was not well with the one person who mattered most, Damon's most talented artist and business partner Jay-Z.

Jay had increasingly grown tired of Damon's ever growing ego and paranoia. The employees at Roc-A-Fella, Def Jam and Rocawear were terrified of Damon's never ending temper tantrums over the smallest of issues. He fired dozens of talented executives and burned bridges left and right. For his part, Damon began to resent Jay's increasing distance from their company and new alliance with Def Jam honcho Lyor Cohen. Rumors flew throughout 2002 and 2004, that Damon and Jay were breaking up and no longer speaking. Tensions came to a head after Jay-Z and Kareem Burke refused to allow Damon to spend $3 million on a single print ad campaign for Armadale Vodka featuring Kevin Bacon and Naomi Campbell. From that point on Jay and Damon really were not speaking anymore. Damon was also being excluded from many high profile meetings at Def Jam regarding his own artists. The writing was on the wall.

On December 24, 2004, Jay-Z asked his old friend Damon Dash to meet him at an Italian restaurant in Manhattan called Da Silvano. Prior to this meeting, the three Roc-A-Fella founders had already agreed to sell their label to Def Jam for $10 million, but Dash was shocked by another piece of the deal that he did not see coming. Each partner would take home $3 million, but only Jay would be promoted to be the President of Def Jam. Even worse, Jay refused to allow Dash to keep the "Roc-A-Fella" name. The final blow occurred when all of Roc-A-Fella's artists were offered the option to stay with Jay at Def Jam or go with Damon to a new label of his own forming. Most artists, including future superstar Kanye West chose to stay with Jay.

The few artists who went with Dash to his new label saw their albums bomb on the charts and the new record label venture quickly imploded. On the other hand, Damon and Jay were still connected via Rocawear. They each still owned 25% of the company. After the Kevin Bacon/Naomi Campbell fiasco, Dash was invited to a meeting at an upscale hotel room in New York. When he asked why they were meeting at a hotel room instead of the Rocawear offices, the partners replied "so no one will hear you scream". By the end of the meeting, Dash was expelled from the company with a $22 million buyout that reportedly only resulted in $7 million in cash.

Between 2004 and 2009 Damon launched and shuttered a string of failed ventures. His new record company, Roc La Familia, folded, as did clothing line The Damon Dash Collection. Dash's wife divorced him and he was sued for $15 million over an alleged rape. Shockingly, by April 2009, Damon Dash, who at his peak had an estimated personal net worth of $50 million, was flat broke.

In his divorce proceedings, Dash revealed to a judge that he actually owed $2 million in back taxes and was in the midst of foreclosure on two New York city apartments. He was also being sued by several NYC law firms and various other creditors for lack of payment. His Chevy Tahoe had been repossessed after he could not keep up with the $700 monthly payments. Dash was forced to vacate his $9 million Tribeca New York home which was later sold in foreclosure for $5.5 million. Meanwhile, Jay-Z would go on to sell Rocawear to Iconix Brand Group for $219 million. Jay also sold millions more albums for Def Jam and in 2008 signed a new $150 million record deal with Live Nation. Today Jay-Z is married to Beyonce and has a personal net worth of $475 million. Damon Dash is still trying to hustle his way back to the top, but only time will tell if he can reach the same heights.

So what's the lesson here? How could Damon Dash avoided this downfall and do you think he can make a comeback?