To say he was overpriced is an understatement, but he was locked in to a guaranteed contract so no matter what the Pistons were stuck paying him. So they could either ride the mediocre wave with an overpriced star or cut him loose, lick their wounds, and pay him a small fortune not to play for them.

On December 22, 2014, the team made the tough decision to go ahead and say goodbye—and pay him the remainder of this season's salary as well as another $26 million for the next two seasons. 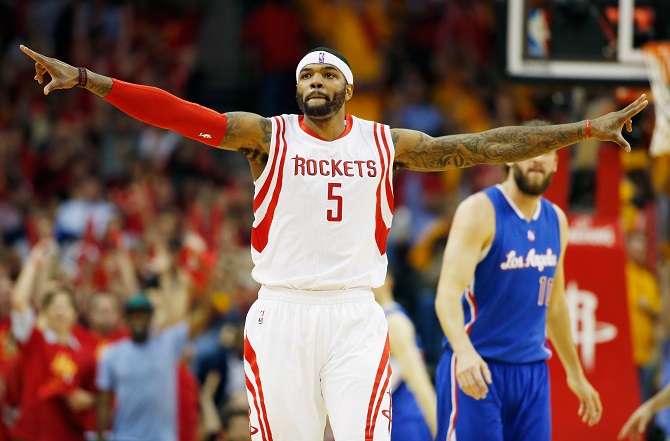 Once he cleared waivers he was free to be picked up by whoever as a free agent, but this time it was going to be much different than when he was last on the market. He was a hot commodity when he was with the Atlanta Hawks. Now—now he was damaged goods; another guy past his prime looking to ride the pine and cash a pay check.

The Houston Rockets decided to go ahead and give him a try. Did they need a 29-year old that was averaging just 13.1 points and 7.2 rebounds per game? No—but for just a couple million dollars it was worth it to find out if he could be that other guy once again.

From his postseason performance alone it looks like it was well worth the gamble.

Prior to Wednesday night's game with the Golden State Warriors he averaged 15.7 points a night in four elimination games on 64 percent (22-34) shooting (53 percent from behind the arc; 10-18). A career 28.5 percent three point shooter, the Warriors have been willing to let him shoot. He has been happy to oblige by hitting 8-19 (42 percent).

Is he accurate all the time? No. Has he been clutch all the time? Absolutely not. He has had some moments where he has been essentially non-existent. Do the times when he has led the team back from the brink and come through for them make up for the ice cold spells?

At a mere $2.077 million this season absolutely.